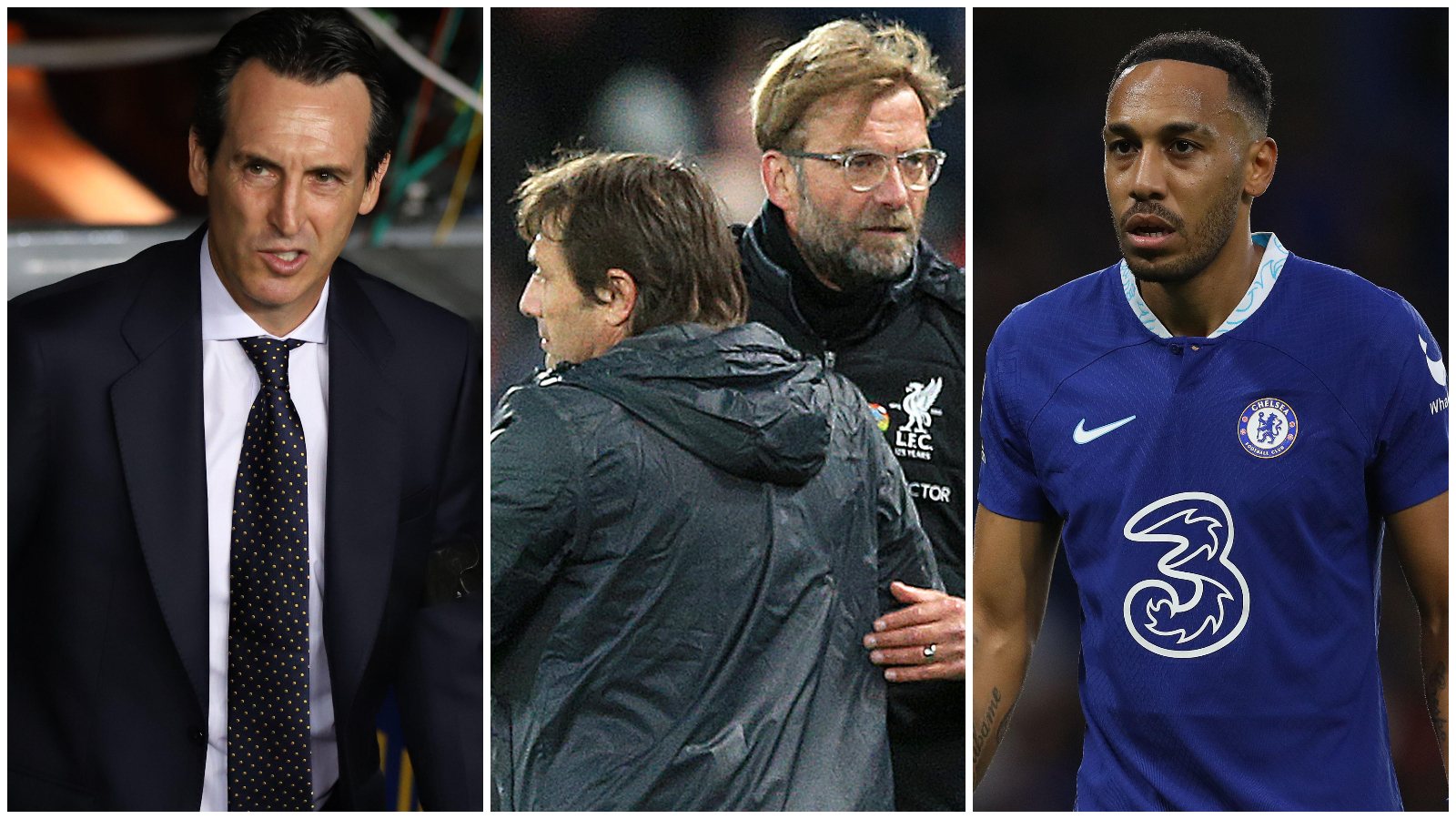 Big?! It’s bloody massive! Liverpool go to Spurs; Auba reunites with Arsenal; Emery gets hold of Villa; and Christ knows what we’ll get from Leeds. Then there’s Serie A and a huge Champo game…

Game to watch – Tottenham v Liverpool
Apologies, dear reader. If you’ve come here looking for insight into the biggest game of the Premier League weekend, we are sorry to disappoint you. For we have not a f***ing clue what to expect.

Anyone who claims to know is lying to you, the scoundrels. But that’s partly what makes Liverpool’s trip to Spurs so enticing. One or both sides could turn it on and dazzle us all; just as likely, either could sh*t their own sheets. Again. Either way, it’s a must-watch.

Both sides enjoyed spirit-lifting Champions League victories in midweek. Tottenham’s was far more consequential, with Spurs’ trip to Marseille going as well as it could, ending with top spot in Group D when the potential was the calamity of a third-placed finish. For Liverpool, it was never really about chasing the four-goal win that would have seen them leapfrog Napoli, but rather to raise the mood after consecutive Premier League defeats to sides mired in the bottom three.

Injuries haven’t helped either side during their recent struggles and absences could play a major part in north London on Sunday. The hosts could be missing Son Heung-min, Dejan Kulusevski, Richarlison and Cristian Romero – three nailed-on starters and their £50million summer signing.

As Klopp has never tired of reminding us, Liverpool too are missing big players, but Antonio Conte could reasonably claim the greater handicap.

Still, the carrot for Conte is a 13-point gap between his side and Klopp’s come Sunday night. Which would be significant since, despite their stodginess and sloppiness, and all the reasons right there before us for why they won’t, we’re still waiting for Liverpool to go on one of those winning runs that propels them up the table.

Team to watch – Leeds United
As unfathomable as Spurs and Liverpool have been, Leeds are arguably the Premier League’s biggest headf*ck this season.

Prior to last week, they were eight games without a win and the screw was turning on Jesse Marsch. Then they went to Merseyside and outfought and out-thought Jurgen Klopp’s men to end the hosts’ 30-game unbeaten streak at Anfield.

In truth, it wasn’t a huge shock to see Leeds larging it up in Liverpool, and not just because of the Reds’ problems. Even during their winless run, there were plenty of signs that the Whites could turn it around. There were also a few that they wouldn’t.

After beating Chelsea in August, they surrendered at Brighton. They probably warranted more than the point taken from home draws with Everton and Villa, sandwiched between a deserved battering at Brentford. At Palace they were naive; then they gave Arsenal a major fright prior to being brushed aside quite easily by Leicester and Fulham. Then they turned over Liverpool.

So Christ knows what to expect from Marsch’s men when they welcome Bournemouth to Elland Road on Saturday. Gary O’Neil, himself looking to arrest a worrying slump of three consecutive defeats, has seen plenty of other sides frustrate Leeds this season and he would be daft not to follow a similar blueprint. Surely now, though, Leeds have learned not to fall into that trap? The Liverpool triumph has to be a springboard for the rest of the season, right?

Player to watch – Pierre-Emerick Aubameyang
Aubameyang wanted to “become an Arsenal legend, maybe leave a legacy” when he signed a whopping new deal with the Gunners. Two years and two clubs later, he faces his former club in a London derby as one of the enemy.

Rather than make an indelible mark on Arsenal, he became a symbol of their malaise, one who went from captain to outcast and a burden which had to be cut loose. Ahead of Sunday, he most likely feels he has a point to prove to Mikel Arteta, but he ought to be more concerned with winning over his current boss.

In any case, Arteta and Arsenal have moved on. Tearing up Aubameyang’s contract came at a cost to the Gunners, who opted to take on the second half of last season with too few options in attack, which cost them a top-four place, but laid the groundwork for a potential title challenge this term.

The former skipper said Arteta couldn’t handle “big characters and big players”. Having transformed the culture at the Emirates, now he doesn’t have to.

Instead of leading out the Gunners, Aubameyang will be trying to derail their ambitions of watching the World Cup from the Premier League summit. He was on the bench at Brighton last week having scored only one Premier League goal for the Blues but on Wednesday night against Dinamo Zagreb, he looked desperate to catch Potter’s eye to make sure he’s front and centre of the welcoming party for Arteta and his old pals on Sunday.

Manager to watch – Unai Emery
Emery will take charge of Aston Villa for the first time on Sunday, almost a fortnight after replacing Steven Gerrard, which has given the new manager plenty of time to plot Manchester United’s downfall. He’ll need it, judging from Villa’s surrender at Newcastle last week.

The Spaniard’s first job, like the vast majority of managers taking over failing sides, is to solidify Villa at the back. Gerrard’s greatest failing was seen to be his inability to get the best out of his attacking riches, or even have the sketch of an idea about how best to use them. But while they were struggling to score, they were also porous at the back. You can bet Emery’s first few days at Bodymoor Heath since taking his first training session on Wednesday have been all about tightening up in defence.

Beyond that, it will be fascinating to see how he interprets Villa’s attacking conundrum, which Gerrard simply could not solve.

The ex-boss spent much of his time worrying about Philippe Coutinho’s place and whether he might be able to play in the same team as Emi Buendia. Emery is more likely to prioritise pace, especially against a United side likely to come to Villa Park and have most of the ball.

Read more: Aston Villa have appointed an ‘elite coach’ in Unai Emery but they’re not an elite club

EFL game to watch – Sheffield United v Burnley
Leagues One and Two take a weekend away from EFL action while they attend to FA Cup matters but in the Championship, the battle of third versus first warrants your full attention, especially in the absence of a Premier League fix at Saturday lunchtime.

We’re not yet halfway through the Championship season but the Bramall Lane battle has the feel of one that could prove pivotal in the promotion race. The Blades have had their turn at the top before the September international break halted their momentum and they slumped to six games without a win.

Burnley are making a better fist of things, with a stunning come-from-behind win, courtesy of two goals in added time, over Rotherham seeing them open up a five-point lead at the summit. Second-placed Blackburn may see an opportunity to claw back some of that deficit since they host bottom-of-the-table Huddersfield on Saturday before a hotly-anticipated Lancashire derby at Turf Moor next week.

At Saturday tea-time, the top two meet when Atalanta welcome Napoli looking to bring the leaders back to within touching distance from the five-point cushion they currently enjoy. Each side have lost only once this season, with Napoli’s unbeaten start halted at Liverpool on Tuesday. Despite their flying start, it is still feasible that a change at the Serie A summit could occur before the World Cup if Luciano Spalletti’s side slip up again on Saturday.

Then on Sunday, it’s derby day in Italy. It begins with fourth-placed Roma against Lazio in fifth at 5pm with only a point between them. Following the fireworks in the capital, it’s the Derby d’Italia as Juventus host Inter Milan with both sides playing catch-up in the battle for a Champions League place.