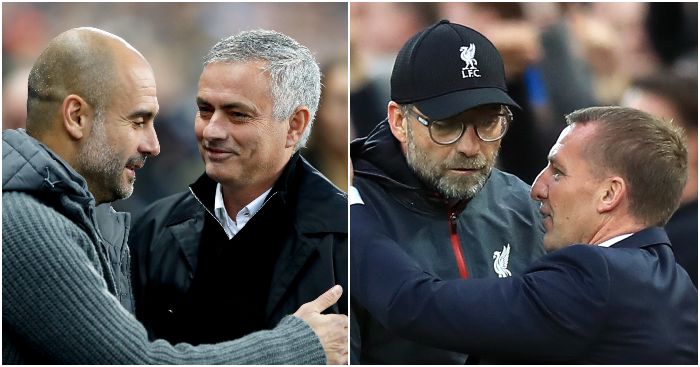 Game to watch – Tottenham v Manchester City
Jose Mourinho would not have scripted it any differently if given the chance. As he celebrates a successful year in charge of Tottenham, the prospect of tainting Pep Guardiola’s new Manchester City contract must be positively ball-tickling.

It was after their first meeting with Tottenham last season that City’s veneer started to crack. This was a team that had ended the 2018/19 Premier League season with 14 consecutive victories to win a title that would soon be accompanied by a Treble-crowning FA Cup. The following campaign began with a 5-0 thrashing of West Ham.

Then Mauricio Pochettino took his side to the Etihad. “What we have done, I don’t know if many teams can do it against them,” said Guardiola of a performance he believed managed to “dignify this sport”.

Mourinho was in the dugout by February and under mounting pressure to deliver. Tottenham had ended a run of four winless games by narrowly beating Norwich at home with a late Heung-min Son goal. Old nemesis Guardiola was the last opponent he needed.

City had 19 shots; Tottenham had three. It ended 2-1 to the hosts in north London.

Saturday will be different, if only because Tottenham are far more imposing in attack while City have somewhat sacrificed that part of their game to focus on a more resolute defence. Harry Kane has had the most attempts on goal of any Premier League player this season (38). That’s twice as many as City’s highest shot-taker, De Bruyne leading the way despite missing one match, being substituted on late in another and occupying a fairly standard midfield role when he has featured.

The clash between an expansive Mourinho and a conservative Guardiola at least adds an element of role-reversing intrigue to what is a pale imitation of their former rivalry. The former has seen his side score three goals or more in seven of their 15 games thus far. The latter has refined a defence that has conceded four goals in its last nine games.

Tottenham will have their title credentials tested to the fullest degree. To be honest, the same can be said of City. Those stable platforms both managers built before the international break are only ever 90 minutes from collapsing into crisis.

Player to watch – Alex Telles
This category has become a bit of a nightmare to decide due to the uncertainty stemming from an ongoing global pandemic. To underline that point, Alex Telles was ruled out of Manchester United’s last five games before the break after contracting coronavirus, then joined Brazil on international duty only to reportedly test positive again, with the nation’s FA later returning a negative result.

The 27-year-old has trained with his club this week and while Brandon Williams and Axel Tuanzebe present passable left-back options, it is of imperative importance to Ole Gunnar Solskjaer that Telles starts against West Brom.

The hamstring injury sustained by Luke Shaw presents an opportunity for the summer signing from Porto. The former, a reliable enough defender for the most part, has exponentially improved the attacking side of his game. Be it crossing or dribbling, he stepped up before a busy schedule knocked him back down.

Telles must fill that void. He was purchased on the back of a final season in Portugal that included 13 goals and 12 assists, as well as two of each in three matches before his move. Any dimensions United lose with Shaw sidelined are only developed further by a player still awaiting his Premier League debut, as three key passes in 67 minutes against PSG last month attest.

Solskjaer could even throw £50.4m worth of caution to the wind by playing Donny van de Beek ahead of him. One step at a time.

Manager to watch – Brendan Rodgers
It would be hyperbolic to suggest Leicester are favourites on Saturday evening. Injuries have decimated Liverpool’s defence but their recent record puts any fears into context. Thiago could be back in a strong midfield. Sadio Mane, Roberto Firmino and Diogo Jota are still available. A running total of 63 home Premier League games unbeaten gives Liverpool a further advantage.

But Leicester at least have no reason to fear their hosts. They are top with the joint best defensive record in the league and are one of the highest scorers. Four away wins in a row has included successful visits to Manchester City, Arsenal and Leeds. Their last game was a victory over Wolves with Christian Fuchs at centre-half and Nampalys Mendy and Luke Thomas in midfield, with Timothy Castagne, Ricardo Pereira, Wilfred Ndidi and Caglar Soyuncu all nearing returns.

This is a remarkable opportunity for Brendan Rodgers. There will surely be no repeat of the scintillating 4-0 home defeat suffered on Boxing Day. Something closer to their last Anfield visit, when a James Milner penalty in the fifth minute of stoppage time was their eventual undoing, is likely.

Even then, they scored from their only shot on target and were fortunate to hold Liverpool at bay for so long last October. This feels like more of a meeting between evenly-matched teams. The questions linger as to whether these managers are on the same level. Rodgers is in a fine position to give a resounding answer.

Team to watch – Arsenal
They might not have faced this opponent in the Premier League since April 2004 but Arsenal will know only too well what to expect from Leeds on Saturday. Mikel Arteta has already experienced firsthand the breathless brand of Bielsaball that has made for compelling viewing thus far.

“They are a nightmare for every team to play,” the Spaniard said after a 1-0 FA Cup win in January. “I said before the game, to play against them is like going to the dentist.”

Leeds had 15 shots and 63.3% possession in the first half before Arsenal awoke in the second and advanced through Reiss Nelson. It was an unconvincing victory that saw Leeds emerge with far more plaudits than the team that vanquished them.

“I wasn’t happy at all with the first 30, 35 minutes, how we started the game, how we approached the game,” Arteta said then, before issuing a message he echoed after the defeat to Aston Villa earlier this month: “When I see what I don’t want to see, and I’m not talking about technically or even tactically, I cannot be happy and I have to let them know.”

His next point after the narrow Leeds win, that beating Manchester United in the previous game “was a big release” as it “took a little bit of that pressure off” and allowed the players to “relax” when they were “not good enough to do so”, remains painfully relevant ten months on.

It could be that facing Leeds helps to recover what was lost against Villa: that focus, determination, grit and intensity. Those deficiencies might also be exposed further by a team few will enjoy playing against, but many have proven to be vulnerable.

Football League game to watch – Bournemouth v Reading
As baffling as it seems, some people greeted this latest international break with enthusiasm and relief rather than exasperation and resentment. Reading, having lost three consecutive games while conceding three goals in each, needed a breather.

They remain top of the Championship but the seven-point lead they held on October 27 has been reduced to just one. Watford and Norwich are lying in wait, with Bournemouth, Bristol City and Swansea not at all far behind.

Bournemouth play host to the leaders at Saturday lunchtime with the knowledge that a win would see them leapfrog Reading. That blip of a defeat to Sheffield Wednesday was corrected against Birmingham as David Brooks finally made his presence properly felt.

Between them, Jason Tindall and Veljko Paunovic have managed 22 career games in the Championship yet both have taken to the toughest league in the world like ducks to water. Will the former continue to float rather serenely or can the latter finally turn the tide?

European game to watch – Take your pick
There’s Monaco (6th) hosting PSG (1st) in Ligue Un at 8pm on Friday. Or Villarreal (2nd) versus Real Madrid (4th) at 3.15pm on Saturday, followed soon after by Atletico Madrid (3rd) hosting Barcelona (8th) at 8pm. Alternatively, Napoli (3rd) against AC Milan (1st) in Serie A at 7.45pm on Sunday looks decent. Watch them all for maximum lockdown points.