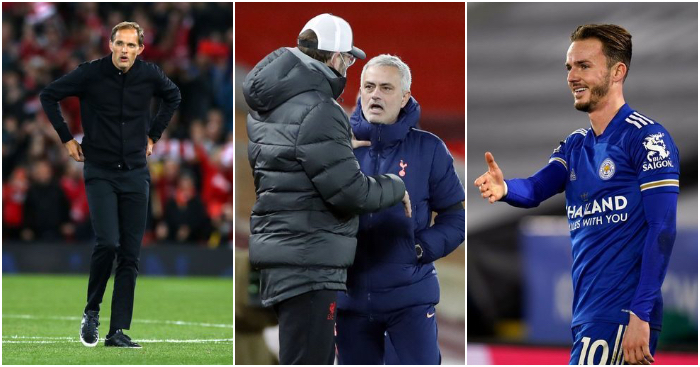 Game to watch – Tottenham v Liverpool
Spurs were top of the league when the two met in December. Jose Mourinho’s side were genuine title contenders and Liverpool weren’t quite proper Liverpool but remained the team to beat.

Spurs could easily have won that game – Steven Bergwijn missed two very good chances and Harry Kane missed a sitter; they certainly didn’t deserve to lose. But as it was, Roberto Firmino’s header seemed almost inevitable – the champions still had that champion-like quality when they needed it most.

But it now seems as though – for Liverpool and Jurgen Klopp – that bit of luck, that bit extra, whatever you want to call that intangible stuff champions have, was a surplus left over from last season rather than an endless pot they can continue to enjoy.

The 7-0 drubbing of Crystal Palace followed the win over Spurs, but they’ve since gone from title favourites to outsiders in a remarkable fall from grace which has seen them pick up three Premier League points from a possible 15 while scoring just one goal.

And that was the problem – the lack of goals – before Marcus Rashford and United tore them apart on the counter-attack on Sunday, with Son Heung-min and Kane presumably bouncing on their couch cushions and clapping their hands with joy as Rhys Williams got the runaround.

The 19-year-old almost certainly won’t start against Spurs on Thursday, but someone has to play in defence and the Spurs duo will fancy their chances against any of them.

A win for Spurs and they’ll be contenders again, while Jurgen Klopp will be sacked, or something similarly ridiculous in this comic strip of a season.

Manager to watch – Thomas Tuchel
It was reportedly in the pipeline for months, but it all ended in a hurry on Monday: Frank Lampard was fired; Thomas Tuchel was hired.

“In terms of training, the quality and detail, (he was) perhaps the best coach I’ve ever had,” Ilkay Gundogan has said of Tuchel, having worked under both Jurgen Klopp and Pep Guardiola.

This bodes well for a Chelsea squad who have reportedly suffered through gradually more intense training sessions, focussed on “big elements” rather than tailored details that have continued to alienate some, knacker others and have made no discernible improvement to their results or displays.

Tuchel may get one training session with the squad before Wednesday’s visit of Wolves, he may get none – either way his tactical imprint will be faint. But this is exactly the sort of squad, with quality in abundance, in exactly the sort of situation, where they were waiting for a manager to leave, where you would expect a new manager performance bump. And Wolves – without a Premier League win since they beat Chelsea before Christmas – could well be an accommodating first opponent.

And as long as his team talk involves something more than “go out there and express yourselves”, he will already be one up on Lampard.

Player to watch – James Maddison
In his interview after the win over Chelsea he said he took Jamie Carragher’s advice on board to “get his numbers up” as “he wants people talking” about him. Out of context, it could be seen as pure arrogance: a footballer desperate for individual acclaim. But the refreshing honesty and eloquence of his interview, as well as his clear desire for those goals and assists to be part of wider success for Leicester and potentially England, had us smiling at a cheeky chap rather than rolling our eyes at an overpaid wanker.

There’s so much to unpack from this interview with #Maddison for coaches, players, analysts or fans. Some great insights.

Big future ahead of him as a player, I’d imagine him to be a pundit soon after his playing career too. #LEICHE
pic.twitter.com/Wogwqm6OkS

He talked of the influence of Brendan Rodgers, the ways in which they had worked on Chelsea’s weaknesses in training, his dedication in watching his own and the team’s performances, and his sit-downs with “Jack the analyst”. It was without cliche and genuinely interesting, which is so frustratingly rare in football.

And the awareness of his own shortcomings and his commitment to improve is paying dividends. He has six goals in his last eight appearances in all competitions and Leicester’s excellent form is in no small part down to his increasing influence on games.

Maddison and Leicester will be looking to get revenge on Everton when they meet on Wednesday, with the fellow European hopefuls getting the better of the Foxes 2-0 in the reverse fixture in December.

Team to watch – Southampton
Since we stopped the count on November 6 in the wake of their 2-0 win over Newcastle, Southampton have won just three of their ten games. Although being sandwiched between Chelsea and Arsenal after half a season sounds good, in reality it means mid-table mediocrity.

Having briefly topped the division and with displays such as the win over Liverpool as an indication of their ceiling, Ralph Hasenhuttl and his team will be disappointed with where they currently find themselves.

Ings’ brilliant winner was their only goal in their last five outings, but it’s chance creation rather striker inefficiency that’s proving to be the problem. Southampton rank second in the Premier League for percentage of shots on target (40%) and third for goals per shot (0.13) – they’re accurate.

But with them languishing in 15th for shots in total (180) and 17th for key passes (7.06 per 90 mins), Ings et al are just not getting the opportunities they require to win games. They’ve actually done very well to score the 26 goals they have; they top the division for goals minus expected goals on +8.7.

They did score last time out though. Well no, not really, it was a Gabriel own goal that saw them through against Arsenal in the FA Cup. But they created enough half chances against the Gunners to give them confidence before they play them again on Tuesday in the Premier League. Some full chances would also be nice.

Football League game to watch – Swansea v Brentford
Thomas Frank is doing a brilliant job with Brentford. After falling at the final hurdle last season and having lost arguably their two most influential players in Ollie Watkins and Said Benrahma, the Bees have gone on a 16-game unbeaten run in the Championship and have won their last four to once again put them in the hunt for automatic promotion.

They sit nine points behind leaders Norwich with two games in hand and just two points off Swansea in second – their opponents on Wednesday – with one game in hand. But the Swans are on something of a roll themselves; they’re unbeaten in their last five. Both teams have realistic hopes of Premier League football next season. Lose and those hopes won’t be dashed, but a win would be a huge boost to either.

European game to watch – Inter Milan v AC Milan
AC Milan’s Serie A victory over Inter in October was a big moment. It was the first time they had beaten their rivals in the league since the 2015/16 season and pitted them as genuine contenders to break Juventus’ strangehold on Italy’s top flight after Inter had come so close last season.

Zlatan Ibrahimovic scored two early goals in that game and has 12 in the league: the same number as Inter’s top scorer Romelu Lukaku despite playing half the number of games.

AC Milan currently have a two-point lead over Inter in Serie A, but the two face off in the quarter-final of the Coppa Italia on Tuesday – a competition Inter last won in 2010/11 under Rafael Benitez and Milan last claimed in 2002/03 with Carlo Ancelotti in charge and Rivaldo, Andrei Shevchenko and Filippo Inzaghi on the scoresheet. It’s been a while.