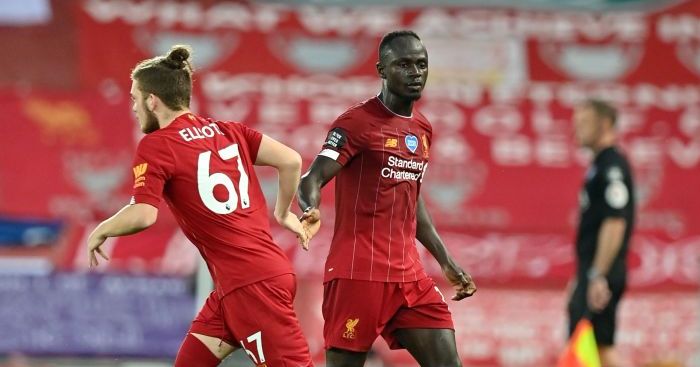 Liverpool have absolutely no excuse not to “bring the boys up” now. And Wolves v Arsenal should be great Premier League fun.

Game to watch – Wolves v Arsenal
As much can be built in 11 days as can be broken in a fraction of the time. A week and a half is long enough to grasp some of the basic principles of a different language but some new learners might forget everything after a few days without studying. Foundations can be carefully laid in two, three or four times as long as it takes to recklessly destroy them.

Arsenal face just such a pivotal period, a run of tightly-packed fixtures that could change the very definition and perspective of their entire season. Leicester, Tottenham and Liverpool await between July 4 and 15, but the initial test of Wolves at Molineux will decipher the importance of those games first.

There is a six-point, Sheffield United-sized gap between the two teams, with six matches remaining. Victory for Wolves would maintain their pulsating Champions League push; an Arsenal win might catapult them into unlikely contention.

Defeat for either at this stage, particularly the Gunners, would be potentially ruinous. A draw helps neither.

The challenge for Mikel Arteta will be to balance his squad. There were complaints concerning his team selection in the win over Norwich but every Premier League team is having to manage its players to complete a sprint marathon after three months of relative non-activity. Arsenal’s injuries have emphasised and complicated that task further.

For Wolves, their objective is to simply keep going. Nuno has fostered a belief and momentum that most clubs should envy in a season that started on July 25 last year and will stretch over at least 366 days.

That largely the same core group of players has been used throughout – only 12 have started at least half of their games – is staggering.

While Wolves might be able to regret but afford a setback if those around them continue to stumble, Arsenal have no such room to manoeuvre. The race for European candidacy surely lost Tottenham this week and could see another north London club drop out of the race soon enough.

Alternatively, they could strengthen their case. Arsenal will want to avenge the 3-1 defeat in the Midlands last April, with November’s 1-1 draw showing how close these two sides might well be in terms of general quality. Wolves will hope to maintain the league’s joint-longest unbeaten record while removing one more team from the equation. It should, at the very least, be engaging and entertaining.

Player to watch – Harvey Elliott
Thursday not only removed the final explanation, but added a compelling excuse. Any temptation Jurgen Klopp might have felt to field full-strength Liverpool teams in pursuit of Premier League immortality is now counter-balanced by an obligation to expect much better than a 4-0 defeat.

There must be changes by the champions against Aston Villa. It would send out the wrong message for Liverpool to keep the majority of the team as it is after such a chastening loss. Alex Oxlade-Chamberlain and Naby Keita seem the obvious candidates but Takumi Minamino, Divock Origi and even Ki-Jana Hoever or Neco Williams might be worth rare starting opportunities.

But the most intriguing options at Jurgen Klopp’s disposal are Harvey Elliott and Curtis Jones. It is time for them to feature.

Aside from Trent Alexander-Arnold and Joe Gomez, Liverpool players under the age of 25 have been given 55 minutes in the Premier and Champions League to impress this campaign. That really ought not to be the case by season’s end. Liverpool have earned the right to use these final games as a sort of pre-season period to refine their squad and gauge who can take on bigger roles next season, particularly in the event they make no signings.

As Klopp himself said recently: “What we want is to create our transfers internally. Bring the boys up. We have three or four players who can make big, big steps.”

All that’s left is to let them.

Manager to watch – Brendan Rodgers
“We’re in a strong position. We still have it within our hands to achieve what would be a dream for us,” said Brendan Rodgers on Wednesday. And he is right: Leicester remain third, with a loosening grip on their own fate but an ostensible control all the same.

It does no harm in pointing out that Champions League qualification would indeed “be a dream” for the Foxes. A team that has finished higher than eighth once in Premier League history could not possibly characterise falling out of the top four as failure. But that rather ignores the context of a 14-point gap to fifth that has been whittled down to just three. Circumstances change and so too expectations.

Leicester are grossly underachieving in terms of what they have shown themselves to be capable of. Rodgers was at pains to admit “we’ve not got the performance right” after defeat to Everton, but the “since we’ve come back” addendum suggests this is a recent, post-return development. The reality is that Leicester had won four of 13 Premier League games before the pause and were struggling. The damp has truly set in but only after a winter of negligence.

Crystal Palace thus have to be beaten at home on Saturday. A four-game run without a Premier League win – the second such sequence since February – cannot be countenanced.

Team to watch – Burnley
The most first-team injuries of any top-flight side. The mid-season loss of four players to expired contracts. The seven-man substitutes’ bench featuring two goalkeepers, two players yet to make their competitive career debuts and only one – Kevin Long – who has ever started a Premier League game. A manager at apparent loggerheads with the chairman.

Contemplating how Burnley are in the top half with more league wins than Arsenal and Tottenham this season is enough to induce an existential crisis.

It makes no real sense yet it works. Like putting worms in your mouth as “a bit of banter”. Good f**king luck to Sheffield United against Sean Dyche on Sunday. You’ll bloody well need it.

Football League game to watch – Derby v Nottingham Forest
Some of the games lost to the fanless ether this past month are cause for regret. How entertaining would it have been to watch Chelsea supporters fervently boo the goals against Manchester City that crowned Liverpool champions? Imagine the number of bubbles West Ham supporters might have blown upon beating the Blues at the London Stadium. Newcastle could have broken the world record for most shirtless men in one place against Bournemouth.

Derby and Nottingham Forest is a huge game that would have only been enhanced further by a crowd. A resurgent seventh hosts an efficient fourth in the race to safeguard against pandemic-related financial disaster by earning Premier League promotion.

Forest have been in or close to a play-off position shortly before and ever since beating their bitter rivals 1-0 in November. That defeat dropped Derby to 16th and they would sink a couple of places further by late December, but Phillip Cocu has steadied the ship with Wayne Rooney’s assistance. Five straight wins has left them a point off Cardiff in sixth.

It’s a televised Saturday lunchtime kick-off between storied local rivals on the day pubs re-open for the first time in 15 weeks. What could possibly go wrong?

European game to watch – Bayer Leverkusen v Bayern Munich
The double Double is on. Bayern Munich won the Bundesliga by two points before crushing Leipzig in the DFB-Pokal final last season. The German champions extended that gap to 13 points in defence of their crown this campaign, and only fifth-placed Bayer Leverkusen can prevent hotels being used in this particular game of monopoly.

Bayern have won 12 league and cup doubles in their entire existence, compared to the four managed by every other club combined in German football history. They have won five since 2010 alone. Leverkusen might need all the pharmaceuticals they can get.