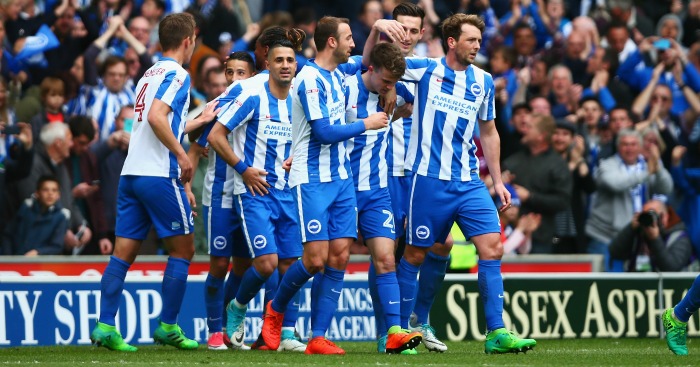 We are sharing our preview duties with The Set Pieces. On Monday, we have Arsenal and Brighton. They have Bournemouth and Burnley. Go read…

There are three ways to invest upon promotion. The first is to shun any loyalty towards the existing squad and splurge on new signings in an attempt to survive relegation, as Huddersfield have done. The second is to bring in players with tried and trusted Premier League experience, and the third is to reward your promotion squad with the shot at the top flight that their performances earned.

That third option is Brighton’s call, with Chris Hughton admitting as early as June that the club would struggle to bring in stellar names but instead look abroad for budget options that provide competition for places as much as guaranteed first-team starts. In fact, Brighton’s team on the opening day may only include three or four new players.

That may be admirable, but it does threaten to make Brighton’s debut Premier League season difficult. Getting goals out of Glenn Murray, Sam Baldock and Izzy Brown is a challenge, while impressive Championship players such as Anthony Knockaert, Lewis Dunk and Dale Stephens will be coping with the step up in class. Knockaert missing pre-season – and probably their opening league game – with injury hardly helps.

The suspicion is that Brighton’s squad is a little light on both quality and quantity, and that relegation is the most likely conclusion to this season. Yet supporters are happy to trust the judgement of owner Tony Bloom and manager Hughton, and see this season as part of the bigger picture. The broadcasting revenues provided by this season in the sun will keep this sustainable project firmly on track.

David Hartrick: Nothing will take away the positivity of last season, because it is amazing that we are even at this level. Hughton talking in June about leaving transfers until late August was a little concerning, because the squad does still need improving, and nobody is kidding ourselves that staying up will be easy. It will be interesting to see if a couple of poor results early on forces a mini-splurge in the final days of the window. Scoring goals in particular could be a problem, with Hughton relying on Glenn Murray and Sam Baldock.

Much depends on the form of Knockaert, the best player in the Football League last season, but behind him is a core group of players who have consistently improved their game when required to meet every challenge, and the goodwill within the club should at least count for something. One thing is for certain: no reasonable supporter is going to throw their toys out of the pram if we struggle.

Matt Stanger: 20th. Brighton will want to start in stronger fashion than the way ended their promotion campaign, when they handed the title to Newcastle in the final three matches. They have been careful in their recruitment, with midfielder Pascal Gross highly thought of in Germany, but replacing former number one David Stockdale with Premier League newbie Matt Ryan could be a risk. It looks set to be a long season for the Seagulls.

Daniel Storey: 19th. Much depends on Chris Hughton’s ability to maintain the fantastic squad morale from last season, but that is hard to do in defeat. Brighton’s promotion was memorable, but their first Premier League season promises to be a hard slog and none of their new signings scream consolidation. I’d love them to prove me wrong, but I think this fairytale is due an uncomfortable chapter.