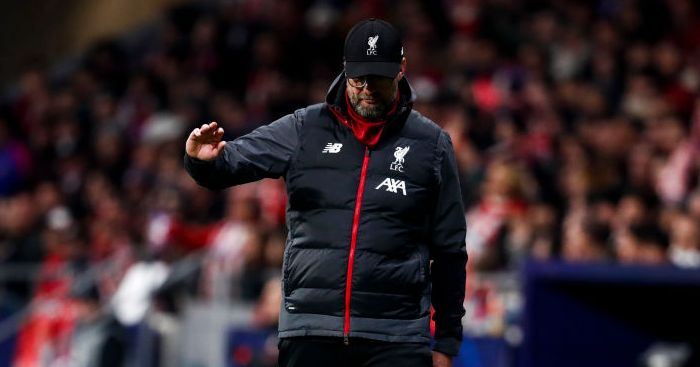 The 34 records Liverpool could yet break are mightily impressive, granted. But what about those milestones that are already beyond such a relentless side? Even Jurgen Klopp’s men can’t excel at everything.

And these are all Premier League era. Sorry, Preston.

It puts into perspective just how unforgiving Jose Mourinho’s first Chelsea team was that, with 11 games remaining, this incredible Liverpool side has already conceded more Premier League goals than the Blues did in the entirety 2004/05.

The Reds are barely even clinging onto second place in terms of 38-game campaigns. Arsenal conceded 17 goals in their 1997/98 title-winning season, meaning Liverpool will have to keep 11 consecutive clean sheets to match them.

Three sides are currently joint-third on 22 goals conceded, including Liverpool themselves last season, as well as Chelsea (2005/06) and Manchester United (2007/08).

Naturally, Liverpool lag behind that dominant Chelsea side in terms of clean sheets. Petr Cech kept a quite ridiculous 24 in 35 appearances during his debut Premier League season – Carlo Cudicini managed one in the other three games – with Alisson and Adrian combining for 12 in 27 matches between them. Maybe they should have played Andy Lonergan after all.

Manchester United might not have actually won the title as a result, but Old Trafford witnessed just 11 away goals in all competitions during the 1994/95 season. Goteborg and Barcelona both breached them twice each during their Champions League group-stage exit, while Wrexham and Leeds scored thrice between them at United in the FA Cup.

It was in the Premier League where United were the most curmudgeonly hosts. The first away goal at Old Trafford was scored by the presumably grinning Stan Collymore in December, followed soon after by Stuart Pearce in a 2-1 win for Nottingham Forest. Mike Whitlow struck in a 1-1 draw for Leicester later that month, with Simon Charlton threatening to ruin United’s final home game of the campaign before Southampton were beaten 2-1 in May.

Liverpool, on the other hand, have let Norwich, Arsenal, Newcastle, Leicester, Tottenham, Manchester City, Brighton, Everton and now West Ham score past them at Anfield this season. Their first home clean sheet inexplicably came in December.

Of course they can break the record Manchester City set a couple of seasons ago. Jurgen Klopp might start Mo Salah, Sadio Mane, Roberto Firmino, Takumi Minamino, Divock Origi, Xherdan Shaqiri, Harvey Elliott, Alex Oxlade-Chamberlain and the returning Robbie Fowler and Ian Rush with Trent Alexander-Arnold as rush goalie when the Premier League is secured. But the Reds will have to markedly improve their marksmanship to even finish as top scorers this season; City are currently four goals ahead.

To put it into perspective, Liverpool could score three goals in each of their final 11 games and still not even reach triple figures for the season. It won’t be happening.

Chelsea had so many games in the 2012/13 season that they felt they had to split them between Roberto di Matteo and Rafael Benitez. “They will say it’s my fault, because everything is my fault,” said the latter of the fixture congestion in March 2013. “If something is wrong some people want to blame me, I have to manage this too. I will try to lead by example and concentrate on the next game. My job is to be sure that we compete in every competition.”

They certainly tried. Chelsea finished third in a processional Premier League but won the Europa League and reached the semi-finals of both the FA and League Cups. Combined with their Champions League group-stage exit and Community Shield, Super Cup and Club World Championship finals, it made for an exhausting few months.

Liverpool could only actually have matched them at best this season. They will play a minimum of 57 games, with 65 their maximum if they reach both the Champions League and FA Cup finals. But the Reds would have required a third-round replay in the latter to make it to a satisfying and climactic 69.