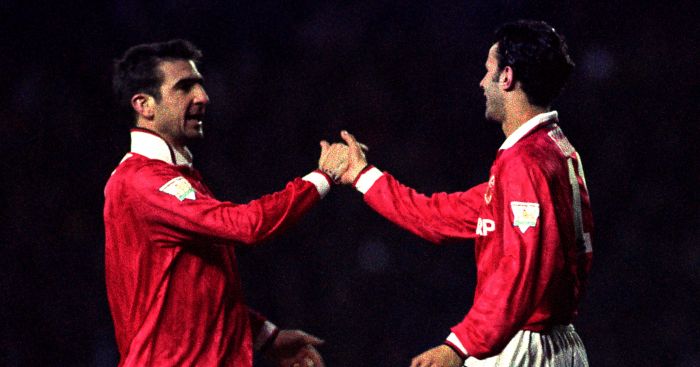 We are talking records that will NEVER be broken, not probably won’t be. Man Utd obviously make an appearance.

10) Oldest player – 43 years and 173 days (John Burridge)
More than one-third of the current managers in the Premier and Football League are younger than John Burridge was when he plucked the last ball out of his net in a top-flight game. It was in the most famous 3-2 ever involving Manchester City and QPR that the veteran last deputised for Tony Coton, Andy Dibble and Martyn Margetson towards the end of the 1994/95 season, having arrived the previous December as emergency cover.

Burridge owes his longevity – he played for 14 clubs in the final four years of his career – to an almost revolutionary attitude and approach towards diet. “I was the first one to be blending apples, oranges and pears and drinking it before a game,” he recalled in his autobiography, noting that “it was just dismissed as ‘Budgie’s strange brew’ then”.

Among his other groundbreaking ideas was to eat potatoes and pasta before a game – “I was regarded as a nutter” – instead of steak, fish and chips or a sandwich, or to have a glass of water instead of a cup of tea. Willy Caballero is the oldest player to make a Premier League appearance this season; he was 1,835 days younger than Burridge in their last games.

9) Most yellow cards for a single team in one game – Nine (Tottenham)
Some records will never be broken because they require too delicate a balance of skill, fortune, planning and timing. Others are in constant jeopardy as teams and players develop new ways of raising the bar. This will forever remain intact because of one variable: Mark Clattenburg.

It was he who let Tottenham “self-destruct” against Chelsea in May 2016, who sought to create “pure theatre” and had developed his own specific “gameplan” during that evening at Stamford Bridge. Toby Alderweireld (unsurprisingly) and Son Heung-min (really surprisingly) were the only outfield Spurs starters not to receive a booking as their title hopes dissipated. Mousa Dembele indulged in a spot of eye-gouging, Eric Dier displayed the sort of attitude he tends to reserve for the stands, Harry Kane even let the hate flow through him and Erik Lamela played completely normally.

8) Most goals in a calendar month – 10 (Luis Suarez)
The greatest players never to register a single double-digit season for Premier League goals must have watched Luis Suarez with envy in December 2013. The Uruguayan started the month with his customary demolition of Norwich, scoring four times in a 5-1 win. He then netted twice against each of West Ham, Tottenham and Cardiff to take his tally to ten goals – and four assists – in 17 days.

Mark Viduka had set the previous marker with eight goals to help rescue Leeds from relegation in April 2003, but this was something else. Perhaps the most impressive aspect of Suarez’s feat was that he shattered the record and still ended December with barren games against Manchester City and Chelsea.

7) Fewest wins – One (Derby)
It might rank low on Sam Allardyce’s list of achievements, below transforming Bolton, the relegation escapes, an England reign, making Cenk Tosun his most expensive ever signing and downing a pint of wine. But it should be remembered that he was the only manager to lose a game to Derby in the 2007/08 season.

The Rams were historically bad in the Premier League, made the fourth round of the FA Cup on penalties after a replay and exited the League Cup at the first hurdle. Yet Newcastle are not a serious footballing institution, so suffered a 1-0 defeat at Pride Park in the September evening breeze.

The loss of 14 players to international duty was blamed, even though it was the hosts who were forced to play Dean Leacock, be managed by Billy Davies and rely on a fine Kenny Miller strike. Derby would not taste victory again in the league for three days short of an entire year, and no top-flight team has ever won fewer than three games in a season before or since.

6) Most clubs managed – Seven (Sam Allardyce)
With that said, Allardyce’s reputation has been carefully cultivated over almost two decades of eating Ronseal on toast. Whether you are as volatile as West Ham, doomed as Sunderland or needlessly panicky as Everton, he is the one irrefutable guarantee of safety in an era of projects and philosophies.

When Division One was usurped as England’s top flight in 1992, Allardyce was a month away from becoming caretaker manager of Preston in the third tier. The 65-year-old has, as of 2020, been in charge of 14.3% of all Premier League sides. Mark Hughes and his six separate stints comes closest but the Welshman is now tainted goods, while Roy Hodgson, Alan Pardew, Steve Bruce and Harry Redknapp are next on five clubs each and all come with varying degrees of baggage. With clubs increasingly favouring logical structures that place the head coach as an interchangeable figurehead, firefighters of his ilk might already have gone up in smoke.

5) Most assists – 162 (Ryan Giggs)
It started with a cross from the right wing with the outside of his boot for Andrei Kanchelskis against Leeds in September 1992, and finished with a simple pass into the feet of Robin van Persie against Hull in his final Old Trafford game in May 2014. Ryan Giggs laid on goals for everyone from Wayne Rooney to Dwight Yorke, Mark Hughes, Denis Irwin, Michael Carrick and, in a routine 3-0 win over Tottenham in March 2004, David Bellion.

He saved the majority of his 162 Premier League assists for Eric Cantona (20), Paul Scholes (16) and Andy Cole (15), also supplying two of Gary Neville’s five career goals, with a pair of assisting hat-tricks against West Brom and Manchester City, both in 2009. With a lead of 51 over Cesc Fabregas in second, David Silva the closest active player on 90 and Kevin De Bruyne a full century behind, Giggs will never be surpassed.

4) Fewest points in a title-winning season – 75 (Man Utd)
Eric Cantona would privately cite the 1997 Champions League semi-final as the reason for his sudden retirement a month later. The Frenchman had missed chances in both legs against Borussia Dortmund, with his mistake directly leading to the only goal in Germany. His own performances had started to deteriorate, along with his importance to a side now vibrant with youthful talent.

He might also have considered United’s title-winning points total as an affront to the entire concept of competitive sport. They had conceded more goals than the four teams directly below them, as well as Leeds in 11th and 13th-placed Blackburn. Every other side had lost at least eight games in comparison to their five. The 75 points that guided them to a fourth championship in five would have been enough for third last season, fifth in 2017/18 and sixth on goal difference the previous campaign. The teams that finished second and third in 1997 – Newcastle and Arsenal – had both changed managers mid-season. The chasing pack was in disarray and Man Utd capitalised by stumbling across the finish line.

There are now so many contenders in the modern game, and the disparity between top and bottom is so great, that at least one side is bound to breach the 80-point mark. Even when the usual front-runners all contrived to trip over their own shoelaces four years ago, Leicester finished six clear of United’s winning total almost two decades prior.

For Liverpool, that moment came against West Brom in April 2003. Defoe matched the efforts of Michael Owen (x3) and Milan Baros (x2) over six-and-a-half years later when Tottenham hosted Wigan in a 9-1 shellacking. “I just felt unstoppable. I just had the feeling something special was going to happen,” the striker later recalled. Poor Chris Kirkland.

Two players – Andy Cole and Alan Shearer – had scored five goals in a Premier League game before, and another pair – Dimitar Berbatov and Sergio Aguero – have done so since. That feat in itself is so rare that accomplishing it within 45 minutes does not bear thinking about.

2) Longest unbeaten run – 49 (Arsenal)
This season’s Liverpool have put the Arsenal Invincibles in the most effective perspective yet. The Gunners had their unbeaten Premier League run ended just prior to a half-century by the same team that stopped Jose Mourinho’s Chelsea at 40 consecutive games without defeat a year later: Man Utd. Liverpool have developed a habit of winning such games against their direct rivals with comparative ease, but were tripped up by Watford at Vicarage Road.

Arsenal overcame similar obstacles. Mentions of Portsmouth, Leicester and Bolton will remind any fan of triumph in relative adversity, of those moments when they suffered stitch during an unstoppable run. But they captured the essence of refusing to lose better than anyone else. Those who refer disparagingly to the draws are the sort that would tell Picasso that he’d “missed a bit”; there is a reason no-one has been, nor ever will be able to match them.

1) Most goals – 260 (Alan Shearer)
If any Premier League record will remain untouched and enshrined forever as a permanent ode to personal brilliance, it is this one. Even the arbitrary removal of his 23 First Division goals leaves Alan Shearer with a lead of 52 over his nearest competitor, the distant Rooney.

In October 2015, a newspaper journalist theorised that Rooney ‘should be able to surpass Shearer to set a new goal record’. He did not. Shearer himself suggested Harry Kane could dethrone him. He will not. Sergio Aguero might come close but he is 80 goals behind, 31 and approaching the final year of what could be his last contract in England.

Therein lies the ridiculousness of Shearer’s record. If the peak of goalscoring ability is 30 in a season, it would take more than eight such campaigns to topple him. If the zenith of goalscoring consistency is 20 in a season, it would take 13 such campaigns to equal him. Any pretender to his crown needs to strike a balance between both after breaking through early and not leaving for European pastures new. And when you factor in his uncounted top-flight goals and numerous injuries, it really is a ludicrous target to have set.