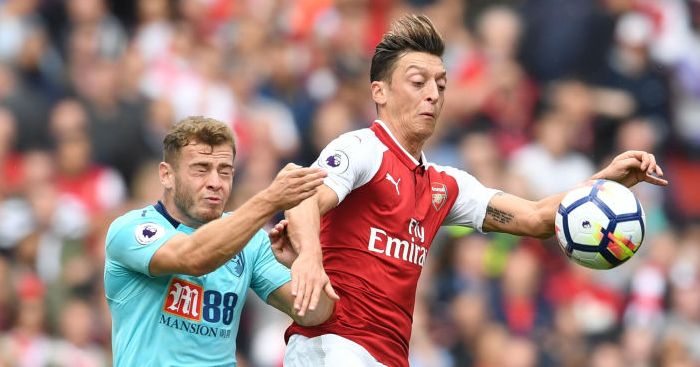 We did this a year ago and chose European champion and future Premier League-winning captain Jordan Henderson. So it sure will be fun to watch Mesut Ozil and Andreas Pereira compete for Player of the Year next season…

As before, we’re defining ‘regular’ as either playing in over 80% of games, or starting over 50%.

Mesut Ozil
It’s not so much that Mesut Ozil has been bad, per se. He was “brilliant” at Bournemouth, influential in both games against Chelsea and quietly effective at home to Manchester United. There have been glimmers of hope under Mikel Arteta that had been snuffed out by Unai Emery.

But he just isn’t a particularly natural fit. An improvement in work-rate, positional discipline and responsibility has seemingly negated his attacking threat completely. Ozil’s last Premier League assist from open play came so long ago it was for Henrikh Mkhitaryan, while Toby Alderweireld, James McCarthy, Phil Foden and Joao Cancelo are among the 241 players to have had more shots than his seven this season.

Ozil is simply too distinct to accommodate and integrate into a new and more specific system; he would not be playing so often if his wages did not dictate his inclusion. There are far more suitable cogs to slot into the machine and Arsenal would be foolish not to try and find them this summer. It is no coincidence that they have won just two of the last 19 league game Ozil has started.

Lee Camp has as many assists as Mesut Ozil in league football this season. Lee Camp is Birmingham's goalkeeper.

Ryan Fraser
“I think everyone knows by now what’s happened, to be honest,” said Ryan Fraser in January. “I’m just trying to play my football. Obviously it affected me the first four months of the season. I wasn’t myself, I didn’t play for the team. I’m honest enough to admit that. It shouldn’t have taken me that long to realise.”

There is sympathy for the Bournemouth winger, who might justifiably have assumed that 21 combined goals and assists for a team that finished 14th would have persuaded one of his many potential suitors to meet a £40m valuation. The Cherries, too, could have been expected to lower that asking price for fear of losing such an asset for nothing when his contract expires at the end of the season.

In this painstaking game of who blinks first, Bournemouth’s naivety has been eye-watering. It is easy to suggest in hindsight that they made a mistake by not capitalising on a situation where a player’s stock would never have been so high, but the decision to keep a disinterested player nearing the end of his deal never had a discernible upside. They kept Fraser, prevented themselves from refreshing an attack in need of far greater variety, and could yet pay with their Premier League place.

Emerson Palmieri
Lost in the haze of Kepa controversy was an even more pronounced and ruthless change to the Chelsea squad that faced Leicester at the start of the month. If Frank Lampard’s words were not loud enough, his actions of dropping Emerson completely spoke volumes.

Lampard said he didn’t leave Kante alone in corners to defend counter attacks. He mentioned that a player “ran forward instead of backwards” and left Kante isolated.

It was Emerson. #cfc pic.twitter.com/dx7TcQPkBQ

The left-back has never been a comfortable fit at Stamford Bridge, a peace offering to Antonio Conte that only helped further his transfer-based war with the club. Emerson provides too little in attack and not a great deal more in defence to be considered any sort of solution to the long-standing problem in his position. Having benefited by association with the unreliable Marcos Alonso, his time in the first-team spotlight has been unforgiving. A reputation that was enhanced when he did not play has been exposed when he has.

Nicolas Otamendi
One of Pep Guardiola’s first official actions as Manchester City manager was to eject an ageing Argentinean centre-half who was no longer fit for purpose. He should at least contemplating echoing the release of Martin Demichelis when he comes to address the future of Nicolas Otamendi.

The absence of Aymeric Laporte has not been kind to anyone at the Etihad Stadium. A 34-year-old midfielder having to drop into defence reflects poorly upon John Stones and even Guardiola himself, first for not replacing Vincent Kompany and then for not giving Eric Garcia enough opportunities.

But Otamendi is the designated defensive driver, the 32-year-old who should but does not know better, and who cannot be moulded into anything different at this stage. There comes a point where losses have to be cut and, after two titles in five years, that time is this summer. His is not really the sort of experience a young player would benefit from having around.

Happy birthday, by the way. Sorry.

Andreas Pereira
There is a reason that Andreas Pereira expressed a recent desire for Ole Gunnar Solskjaer to “stay for many, many more years” at Manchester United. Under no other coach would such bland, feckless and downright ordinary performances be accepted or excused by some spurious suggestion of ‘club DNA’.

Pereira started two games in as many campaigns under Louis van Gaal, both in the League Cup. Tony Adams was among his four different managers during a season-long loan at Granada. He scored a single goal in nine months at Valencia. He was almost completely ignored by Jose Mourinho upon returning from both of his temporary spells in Spain.

Yet he has made 49 appearances under Solskjaer – at least 20 more than any other manager has given him at senior level, and 36.6% of his overall career total. Had he not emerged from the club’s academy he would have been sold. Pereira is the fifth most-used player of the Norwegian’s managerial reign, and his own family would struggle to recall more than one or two of those displays.

Joelinton
Jonjo Shelvey is Newcastle’s top scorer this season. He has at least twice as many Premier League goals as any teammate. That is hilarious.