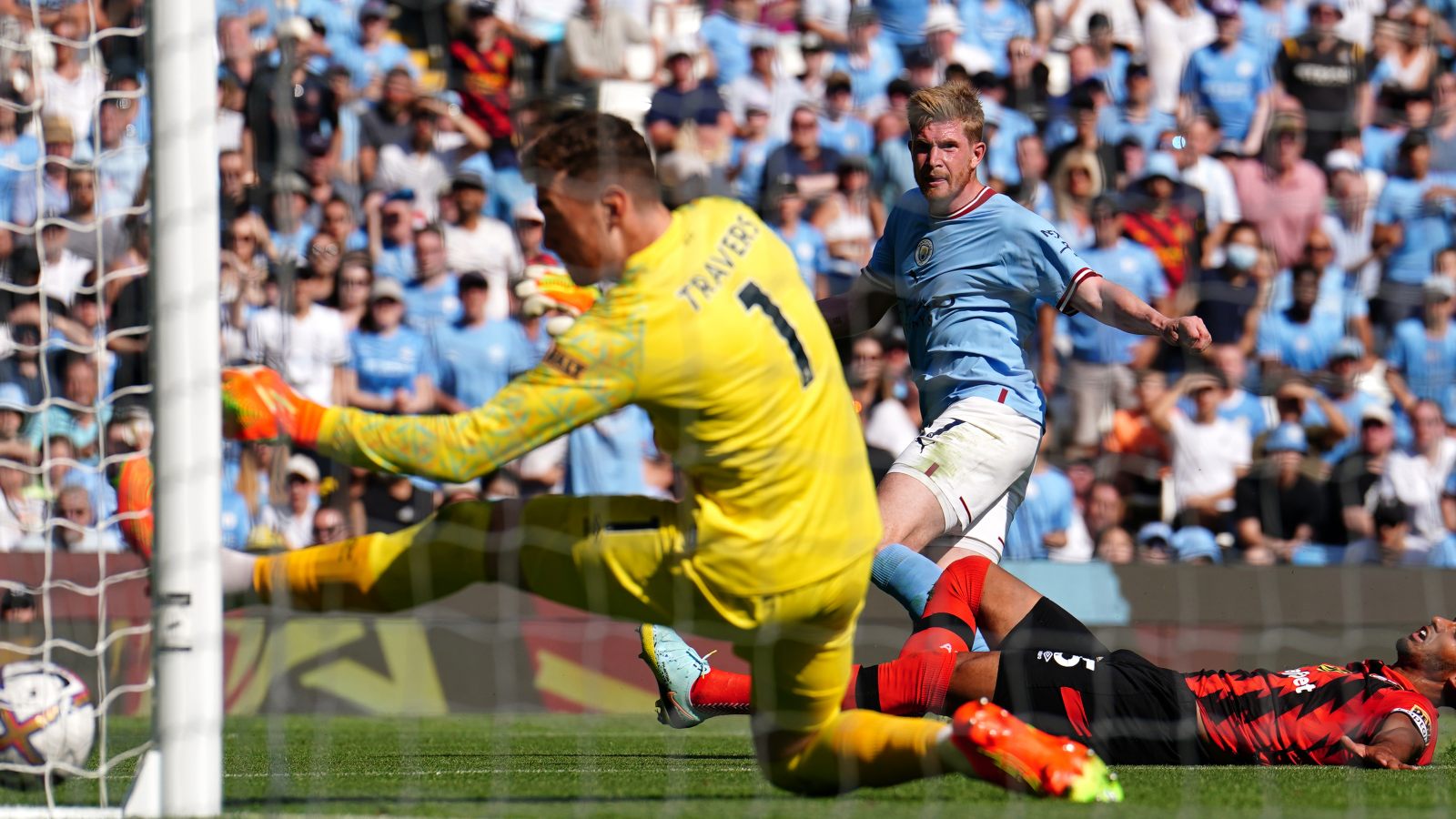 Erling Haaland had to settle for an assist on his home debut for Manchester City as Pep Guardiola’s side cruised to a 4-0 victory over Bournemouth.

All eyes were on the prolific Norwegian after his Premier League bow brought a match-winning brace at West Ham last weekend, but instead it was Ilkay Gundogan, Kevin De Bruyne and Phil Foden who did the damage at the Etihad Stadium before a late own goal from Jefferson Lerma.

Haaland teed up Gundogan for the opener but finished the first half with barely more touches, five, than City had goals, three. There were signs of frustration but it would be hard to call the giant Norwegian peripheral to affairs, his movement freeing up space for others to prosper.

He should have scored too – with Foden guilty of failing to square the ball for an easy early tap-in before he scuffed a shot with his final touch and was replaced by Julian Alvarez midway through the second half.

As a pall of blue smoke hung over the pitch from pre-match fireworks, City wasted no time in putting Bournemouth under relentless pressure. Nathan Ake and Rodri both missed with unmarked headers as they won six corners in the opening 10 minutes.

When a De Bruyne shot struck the heels of Foden, he swiftly controlled and brought a good save out of Mark Travers, but ignored the unmarked Haaland to his right.

It took another 10 minutes for Haaland to even register his first touch. When he did, it was an assist.

He exchanged passes with Gundogan on the edge of the area, Haaland holding off two defenders to return the ball while off-balance, leaving Gundogan with the more straightforward task of lashing the ball into the same net where his dramatic late goal won the title for City 83 days earlier.

Haaland then mis-controlled an opportunity to score himself, but City’s second was coming and arrived just after the drinks break through a sublime moment from De Bruyne.

The Belgian cut in from the right-hand side and, as defenders converged on the edge of the penalty box, curled home a shot with the outside of his boot.

20 – Kevin De Bruyne has both scored and assisted for the 20th time in a Premier League game, only Mohamed Salah (24) and Son Heung-Min (21) have done so on more occasions since the Belgian's Man City debut in September 2015. Maestro. pic.twitter.com/X7k4VExdB2

Haaland was a spectator again as City went 3-0 up seven minutes before the break. Bournemouth ventured over the halfway line for only the third time in the match but were swiftly hit on the counter.

Riyad Mahrez hoovered up a loose pass and played in De Bruyne, who waited for the run of Foden before slipping the ball through Chris Mepham’s legs for the England midfielder to apply the finish.

Haaland needs only a sniff to come alive, and he almost had City’s fourth when he got a boot to a high ball near the line, forcing Travers to tip a shot over.

Jack Grealish replaced Foden at the break but City were slower to get going, needing 10 minutes to threaten as Travers turned De Bruyne’s shot into the side-netting before Gundogan bent an effort narrowly wide.

Lerma then made a vital touch to keep Kyle Walker’s cross away from Haaland in front of goal.

Haaland’s big moment should have come in the 73rd minute when Grealish rolled the ball back to him on the penalty spot, but he scuffed a shot that went harmlessly wide – his final touch before being replaced by Alvarez.

The fourth goal came as a result of some fine play by Joao Cancelo to create space on the left-hand side of the penalty area.

His cross was intended for substitute Bernardo Silva, brought on to a rousing reception amid continuing links with Barcelona, but caught the heel of Lerma to deflect into the net.