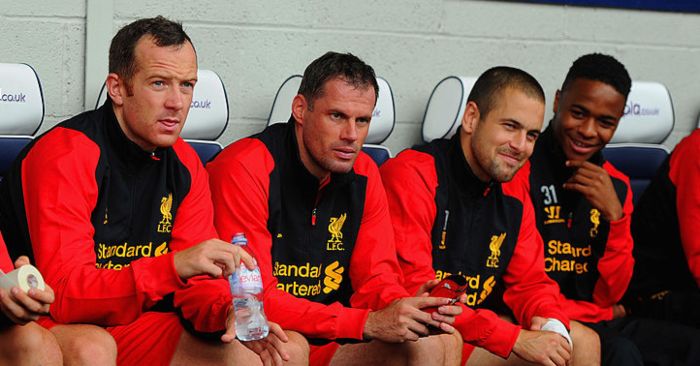 With Liverpool ‘thinking’ about bringing Raheem Sterling back to Anfield, it seems only appropriate to consider the Premier League returns that we have absolutely no recollection of…

Craig Bellamy (Liverpool)
Sterling would actually be the third player to have two spells at Liverpool in the Premier League era. Robbie Fowler returned in 2006 to finally usurp Kenny Dalglish for career goals for the club, while Craig Bellamy remains level with Mark Lawrenson and Georginio Wijnaldum on that particular list.

He can even boast the same distinction as the latter of scoring against Barcelona. That was the peak of his initial year at Liverpool, which culminated with perhaps the most Rafael Benitez story imaginable: a frank conversation on the flight home from defeat in the Champions League final during which the manager told the player he was free to leave as they were signing someone else.

After an even more brief sojourn at West Ham, as well as a period tormenting Rio Ferdinand at Manchester City, Bellamy was back at a rather different Liverpool to the one he left; Benitez’s Champions League runners-up had become Dalglish’s mid-table mess within four years by 2011.

The Welshman actually finished his second and final season at Anfield being outscored only by Luis Suarez. Fans will fondly recall his performances in helping Liverpool reach both domestic cup finals, but the rest of us would struggle to picture much beyond that golf swing at the Nou Camp.

Joe Cole (West Ham)
There was scant resentment towards Joe Cole upon his departure from West Ham in 2003. The 21-year-old had rejected the offer of a new contract but the circumstances – a relegation he did more than anyone to try and avoid, interest from new dominant force Chelsea and a collective realisation that a potentially generational talent would not waste a year in the First Division – were mitigating.

It was as unromantic as a slice of burnt, unbuttered toast for Valentine’s Day breakfast. Cynical and self-serving, too. But understandable and obvious. And as an “extremely sorry” West Ham themselves said: “This transfer now ensures that no further sales will be necessary following relegation.”

Cole added that “I would like to think that I could return here some time in the future”, achieving that goal as a three-time Premier League winner in a haze of Liverpool regret in January 2013. He thrilled on his second debut in an FA Cup draw with Manchester United, but inevitably failed to quite capture that initial magic from a decade before.

Carlton Cole (West Ham)
On May 21, 2013, West Ham announced that Carlton Cole would be leaving at the end of a season in which he scored two goals. “We felt it better he found pastures new,” said Sam Allardyce.

On September 3, West Ham approached Cole over the possibility of re-joining, having spent an entire transfer window “trying to sign one of three international strikers, but all opted for the lure of European football instead”.

On October 14, and after Cole proved his fitness, the move went through. He did enough to earn an 18-month deal the following January but generally underwhelmed throughout his ostensible second stay, save for edging ahead of Trevor Sinclair to become the club’s second top Premier League scorer behind Paolo Di Canio. Mark Noble would force him back down to third a few years later.

Roque Santz Cruz (Blackburn)
It feels apt that Roque Santa Cruz made his Blackburn debut as a substitute for Benni McCarthy, considering their respective and ridiculous single-season exploits. While McCarthy scored 18 of his 37 Premier League goals in 2006/07, Santa Cruz plundered an even more impressive 19 of his overall 26 a campaign later.

The curious thing is that form was not immediately leveraged into a move, but that the residual effect lasted through an underwhelming sequel. Santa Cruz scored four goals in 20 games in 2008/09, making a mockery of the reported £25m Rovers were demanding for him amid Manchester City interest that January.

But Mark Hughes does have a tendency to be Mark Hughes, and having overseen that blistering start to life in England, he insisted that City did not relent. They signed Santa Cruz for £17.5m. He was bad.

By January 2011, he was back on loan at Ewood Park, this time replacing Nikola Kalinic in a defeat to Chelsea. And that really does just about sum it all up.

Pascal Chimbonda (Tottenham)
If Tottenham were Samson, Pascal Chimbonda was their uncut hair. It was he they derived enough strength from to win the 2008 League Cup, he they sold to Sunderland that summer and he they brought back months later in January.

It was the 2008/09 two points from eight season and Harry Redknapp, appointed as successor to Juande Ramos in October, used his first transfer window to become a caricature: Carlo Cudicini joined on a free, Wilson Palacios was brought in from Wigan and Jermain Defoe, Robbie Keane and Chimbonda all returned for their second spells at White Hart Lane.

Quite why Chimbonda bothered is unknown. He played five games, winning none, before joining Blackburn for a minimal loss in August.

Jens Lehmann (Arsenal)
“You could see that it was a little bit an end of season game, especially with the fact that they didn’t open up at all,” said Arsene Wenger, who hardly helped change that mood against Everton in May 2008. He brought on Champions League runner-up, Invincible and professional #madcap Jens Lehmann for the final 20 minutes as “a farewell” before his exit for Stuttgart.

One would be forgiven for assuming it was his final Arsenal appearance, particularly considering his June 2010 retirement after a couple of years in Germany. Yet injuries to Wojciech Szczesny, Lukasz Fabianski and Vito Mannone meant Lehmann, in London to complete his coaching badges with the club anyway, was called in as emergency cover in March 2011.

When Manuel Almunia was struck down in his prime – sabotage, presumably – in the warm-up to a game against Blackpool a month later, Lehmann’s time had come. He played his final match for Arsenal in a 3-1 win, conceding his last goal as a professional to Gary Taylor-Fletcher. It’s what he would’ve wanted.

Pavel Srnicek (Newcastle)
There are three certainties in life: death, taxes, and Pavel is a Geordie.

It is incredibly endearing whenever a foreign footballer becomes an entire city’s adopted son. They understand the culture and form an unbreakable bond with the support. They get the club.

For Srnicek, that path was not straightforward. He was signed by Jim Smith in January 1991, initially struggled and conceded six goals in one game against Tranmere, lost his place to Tommy Wright, earned it back in time to help guide Newcastle to Premier League promotion in 1993, watched Manchester United be dismantled from the best seat in the house in 1996, then indulged in some healthy competition with Shaka Hislop before both were deposed by Shay Given in 1997.

The keeper returned to the Czech Republic after seven wonderful years, then moved on to Italy and Portugal in between brief spells Sheffield Wednesday, Portsmouth and West Ham. It was thought that he had played his last game, for Beira-Mar as a 38-year-old in 2006, but an injury to former foe Given brought him back home.

Srnicek was treated to a rapturous reception as a late substitute in December 2006, more than nine years since his last appearance for the Magpies. He featured once more but stayed for a season-long lap of appreciation.

There was an outpouring of Tyne grief upon his passing in December 2016. A minute’s applause was held for the keeper before the first home game since his death. Newcastle went on to pay the most fitting tribute possible: a 3-3 draw with Manchester United that would have done Srnicek and The Entertainers proud.