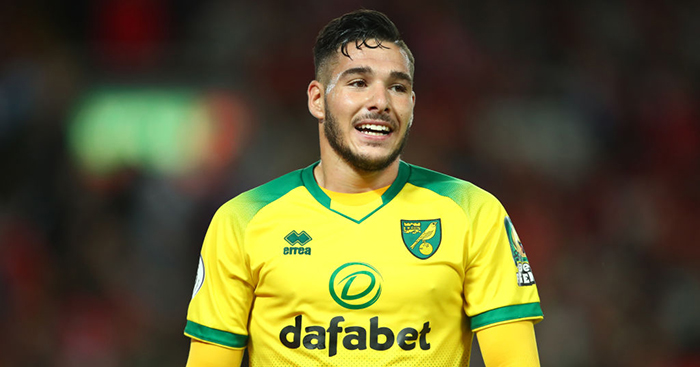 Best player: Emiliano Buendía
That Trent Alexander-Arnold, he’s quite a player, eh? All those assists, and it’s no fluke: among players with 1500 minutes, he’s second in the league in expected assists/90, behind only Kevin De Bruyne.

Actually, he’s in a virtual tie for second. With Emiliano Buendía of Norwich City.

That’s right. While we’ve all been marvelling at England’s brilliant right-back, there’s an Argentine who’s been creating chances at the same rate – for the team in last place.

Admittedly, it’s not quite the same, because Buendía is an attacking midfielder, and that’s his job. But then so are James Maddison, Bernardo Silva and Jack Grealish, and none of them are close to Buendía. Neither are high-powered wingers like Sadio Mané, Son Heung-min and Adama Traoré.

It’s not just expected assists, either. Buendía has seven real live assists, which puts him tied for fourth in the league. He’s assisted 28% of his team’s goals, a higher percentage than anyone in the division.

So why haven’t we heard more about the diminutive right-footed playmaker? Because football journalism. Teemu Pukki is Finnish and scores goals, Todd Cantwell is English and has the hair. And if a team’s in last place, we don’t have space for anyone else.

He’s not perfect. Playing off the right wing, sometimes he’ll dribble into trouble, and he’s dispossessed a bit too often. But make no mistake: Buendía is the sweetest singer on the Canaries. And he’ll be snapped up in no time if Norwich go down.

Emiliano Buendia is still only 23.

He got 12 assists and 8 goals in the Championship last season and had 7 assists when the Premier League was suspended. He’s been a shining light for Norwich, you’d assume plenty of clubs will be sniffing around him.

Biggest disappointment: Moritz Leitner
He’s a highly skilled player with plenty of Bundesliga experience, and made the bench when Klopp’s Dortmund lost to Bayern in the Champions League final. He was also excellent for Norwich City in the first part of last season. Injuries curtailed his output, but just about everyone expected him to be a key figure in the Canaries’ midfield in the Premier League.

It didn’t happen. He had a few good games in the first two months of the season, then dropped from sight.

There’s no doubt about his quality, and you’d have thought he’d get another shot with City in danger of the drop. But although Daniel Farke said publicly there’s no rift, he just hasn’t been deemed up to standard.

The Canaries thought about loaning him in January, but that didn’t happen either. And while he may have made the bench in a Champions League final, he’s made the Norwich match-day squad only once since early November.

Best performance: Everton 0 Norwich City 2
Not the best result: that of course was the famous victory against Manchester City. Nor the most dominant showing: that was early in the season home to a pathetic Newcastle. But the late November win at Goodison Park gets the gong for several reasons.

For one thing, it was their first (and still only) away win. It was their first away goal since the opening day of the season at Anfield. For another, City were coming off a dispiriting home loss to 10-man Watford, and Everton, although struggling under Marco Silva, had just dominated Southampton at St. Mary’s.

And then there were the tactics. Facing Everton’s high press, Daniel Farke dropped the pretty football and went Route One. The telling stat? In the matches just before and after, Norwich had nine and 11 attacking aerials, respectively; against Everton they had 24.

It worked. The hosts were off balance most of the first hour and Norwich were first in the 50-50s. Winger Onel Hernandez had his best match of the season, setting up chances for Todd Cantwell and Sam Byram, and was himself denied by an excellent save by Jordan Pickford.

The breakthrough came in the 55th minute, and fittingly it started with a long ball from Christoph Zimmermann. Kenny McLean outjumped Mason Holgate and headed the ball toward Teemu Pukki. The Finn outmanoeuvred Holgate and Yerry Mina and sent Todd Cantwell through for a fine finish.

Norwich could even have doubled their lead a few minutes later, when Byram missed an unmarked header from a McLean free-kick. Eventually Everton got in gear and put the pressure on, but Tim Krul saved well from Gylfi Sigurdsson and Cenk Tosun and sub Dennis Srbeny got the clincher in stoppage time.

The tactical success made you wonder if Farke was about to change things for a while, but it was a one-off. Might the season have turned out differently if he’d been less true to himself?

Worst performance: Norwich City 1 Aston Villa 5
There are plenty of candidates for this one. Losses at Manchester United and Brighton, both games in which City barely turned up, come to mind. But it takes a special effort to lose by four goals at home to Aston Villa.

Not that Norwich didn’t create a few good chances, particularly in the first 45. But their defence, unreliable at the best of times, simply didn’t function. In the first half, Wesley was left unattended twice for a brace, and McLean’s foolish challenge on Conor Hourihane was good for a penalty (saved by Michael McGovern). Elsewhere, after slack marking on a corner, Anwar El Ghazi hit the woodwork, and Villa wasted a couple of other decent chances as well.

It was just as bad, in a different way, after the interval. A giveaway allowed Jack Grealish to waltz through the middle and score with ease; a second led to a fine Hourihane strike; a third saw a Douglas Luiz curler finish the rout. The Canaries’ only goal came in the 88th minute through a comedy mix-up between Tyrone Mings and Tom Heaton.

Biggest VAR moment: Teemu Pukki denied against Tottenham
An easy choice. Hosting Spurs at Carrow Road, the Canaries took an early lead against the run of play through Mario Vrancic. They appeared to have doubled it in the 33rd minute when Vrancic’s beautiful long diagonal ball and Pukki’s classic chest trap sent the striker through. But unbeknownst to everyone but the man in the booth, Pukki’s right armpit had won its secret race with Toby Alderweireld’s right knee – and even when you saw the freeze-frame it didn’t look clear. No goal, and although City eventually took a 2-1 lead, a late penalty gave Spurs the draw.

Offside was invented to stop any sort of advantage….how the heck has Pukki got any advantage there….he’s behind Toby….absolute farcical…..

Did their recruitment work?
What recruitment? Norwich famously didn’t do much in the market in the summer. Sam Byram, acquired as an auxiliary right-back, eventually took over from Jamal Lewis on the opposite side. He did a creditable job from late November until February, when he was sidelined by a hamstring injury.

The club tried a bit harder in the January window, adding Ondrej Duda from Hertha and loanee Lukas Rupp from Hoffenheim to bolster the attack. Duda had his creative moments, but neither ever looked likely to make the difference.

Dick move: Daniel Farke criticises Emiliano Buendía
When a manager has to take seven minutes to answer a simple question, you know there’s trouble. For Daniel Farke, the very reasonable question was why he had decided to bench Buendía for a few matches, given the player’s obvious importance to the team. Farke bumbled his way through a tortuous answer: he did his very best to say that he was happy with Buendía, but at the same time wound up critiquing him all over the place for tactical and possibly attitude failures. He might have had an argument, but could have been much more circumspect. Farke also not very nicely pointed out that the team’s record was worse with Buendía than without him – true, but all the xG figures showed the team performing better with Buendía in the lineup. Listen and judge for yourself:

Manager’s job security:
No problem. Norwich know they’re a yo-yo club at this point, and Farke has revolutionised the squad. He got rid of deadwood, brought in some silky football and produced unexpectedly quick success. If they go down, there’s every reason to believe he’ll have them fighting for promotion again. He’s under contract until 2022, and doesn’t seem the sort to jump ship either.

What they need this summer:
Depends. Pre-virus, the squad looked fine for the Championship, with the real danger that Cantwell and Buendía would be poached by Premier League clubs. That would mean big holes in the attack, and the need for much more oomph from the wings.

But there’s at least a chance now that the table will be frozen where it is, with the Canaries still in the top flight. If so, job one will be upgrading the defence. Among the central defenders, Ben Godfrey has had some decent notices, and old hand Grant Hanley has been surprisingly effective in recent weeks. But the numbers speak for themselves: 52 goals conceded in 29 games. A young holding midfielder would help too. Alex Tettey has been a great servant, but in this system he can’t provide enough protection for the back four.