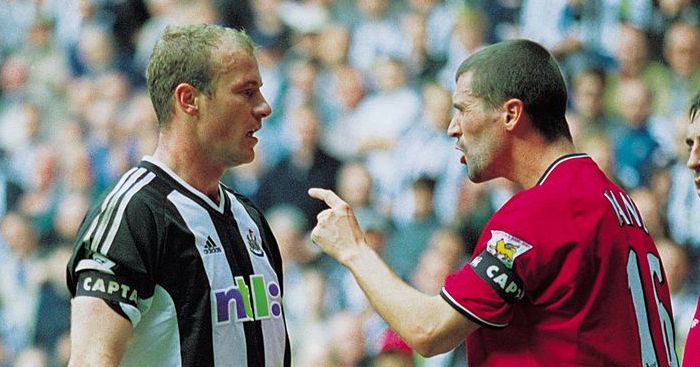 Let us know any Premier League rivalries we might have forgotten at theeditor@football365.com. Please.

10) Jamie Carragher v Lucas Neill
When Liverpool sought right-back cover in January 2007, they ran their collective finger down a list of potential targets and landed on one familiar name. Lucas Neill was a peculiar option for a number of reasons.

The Australian had hardly shone at Blackburn. He was a serviceable defender for an archetypal mid-table club, dependable enough if the bare minimum was required. The Reds were perhaps fortunate that, despite the offer of Champions League football to a professed boyhood Liverpool fan, he opted to join relegation-threatened West Ham on a higher wage instead.

But it was Neill’s history with vice-captain Carragher that raised the most eyebrows. The former had shattered the latter’s leg with a woeful challenge during a Premier League game in September 2003, an incident for which Carragher contemplated mafioso retribution.

‘My mates were ready to hunt him down if I gave the go-ahead,’ he wrote in his 2008 autobiography, adding that only the presence of Rovers midfielder David Thompson, a close friend of Carragher’s, prevented ‘an assault’ being carried out on Neill in a Manchester shopping centre. ‘The impromptu mission was aborted,’ apparently.

9) Nemanja Vidic v Fernando Torres
Not every rivalry has its foundations in contempt or hatred. Some are carefully cultivated through good-natured conflict and healthy competition.

The battles between Nemanja Vidic and Fernando Torres are a prime example. Neither made any salacious claims in books, and social media was too primitive for players to accidentally post digs at each other from their pockets, and even in their respective retirements there is a mutual respect but a curious reluctance to praise the other too highly.

But for 90-minute spells – often much less in Vidic’s case – between 2007 and 2010, there was a simmering tension between two Premier League greats. The misconception is that it was one-sided, fuelled by the enduring image of Vidic sprawled on the turf as Torres raced past to equalise in Liverpool’s 4-1 win in March 2009; the reality is that the centre-half could boast clean sheets and commanding performances to silence the Spaniard.

8) Roy Keane v Alan Shearer
“I don’t know why, but Keane threw the ball at Shearer,” said Martin Tyler on commentary, blissfully unaware of the inner workings of someone who would recommend Mick McCarthy “stick the World Cup” up both his arse and his b*llocks less than a year later.

And that is how it all started: the cynical gamesmanship of Shearer towards the end of a 4-3 Premier League win for Newcastle, pierced by the ridiculous hilarity of Keane aiming a throw-in at the back of his head, then accidentally making referee Steve Bennett drop his cards when throwing a punch in the ensuing melee.

“He didn’t actually cut his head off,” was Sir Alex Ferguson’s measured defence. The pair rarely saw eye to eye thereafter, with Shearer suggesting he would have treated Keane to a left hook of his own if the situation demanded it.

7) John Terry v Wayne Bridge
Handshake enthusiast Mark Hughes had thankfully been replaced as Manchester City manager by Roberto Mancini two months prior to Wayne Bridge socially distancing from John Terry’s outstretched palm in February 2010. News of the Chelsea centre-half’s attempt to impose a super-injunction on allegations of a four-month affair with the City left-back’s former girlfriend had broken a month earlier and the wound was still clearly fresh.

It is worth, by the way, refreshing one’s memory as to just how despicable the media were with Vanessa Perroncel at the time.

Terry was promptly removed as England captain, with Bridge announcing his permanent withdrawal from international selection soon after. He played just once more against his former teammate, again refusing to shake hands before a 3-0 defeat for West Ham in April 2011.

6) Jamie Carragher v El Hadji Diouf
Around the time he was putting hits out in the middle of the bloody Arndale, Jamie Carragher was developing a burgeoning animosity for an enemy far closer to home. El Hadji Diouf joined Liverpool in summer 2002 and proceeded to enact only the latter half of a charm offensive.

The spat did not become public until 2008, when Carragher said Diouf was the perennial “last pick” in five-a-side training games, and ‘the only No. 9 ever to go through a whole season without scoring’. Diouf’s response, pointedly given to The Sun, was that the defender was “like a make of ketchup or mustard to a normal person” and “was jealous of me”.

Neither have backed down since. Diouf called Carragher a “turkey” in 2015 and “a sh*t” and “a f**king loser” in 2016, with Carragher branding Diouf his “worst” teammate more than a couple of times since. They faced one another nine times upon a parting of the ways in 2004, with Diouf winning and scoring only once.

El-Hadji Diouf on Jamie Carragher: "He was a right-footed player with two left feet. If he wasn't a Scouser, a son of Liverpool, he would never have had the career he did." (BeIN)

5) Roy Keane v Alf Inge Haaland
Up until roughly a year ago, any quick Google search of ‘Haaland’ would conjure a few archived stories from the turn of the century, accompanied by some grainy images and video stills. Erling Braut has already usurped his father in terms of global notoriety, but Alf Inge has the family’s Premier League monopoly for now.

Haaland and Keane had not only played against each other before Leeds hosted Manchester United in September 1997, but they were almost teammates. Nottingham Forest had tried to sign the Norwegian in October 1992 but he would not arrive until December 1993, by which point Keane had left for Old Trafford.

Their first meetings passed by without incident but Haaland opted to poke the bear when Keane ruptured his cruciate ligament trying to trip him. The reaction was something Keane would cite in his autobiography five years later when explaining why he enacted his retribution:

‘Don’t ever stand over me again sneering about fake injuries.’

Keane had ‘waited long enough’, allowing residual tensions to boil over in the heat of a Manchester derby. He was sent off, fined and handed an even longer suspension after suggesting the knee-high tackle was premeditated. Haaland threatened legal action upon his retirement due to injury soon after. Neither came out of the situation in a particularly flattering light.

4) Graeme Le Saux v Robbie Fowler
By the time Liverpool visited Chelsea in February 1999, Graeme Le Saux had endured ‘allegations’ of homosexuality for roughly eight years. The left-back had dared to go on a camping trip with Ken Monkou, graduate university, visit art galleries and read The Guardian; he was positively flaming.

Rival supporters had long latched onto the rumours, but Robbie Fowler was the first player to bring them to the pitch. After fouling Le Saux at Stamford Bridge, he proceeded to point to his posterior and shout: “Come on, come on, give it to me up the arse.”

Le Saux refused to take the subsequent free-kick until Fowler relented, but the sense of injustice was heightened when he himself was booked for time-wasting. After retaliating with an unpunished elbow towards the end of the match, the FA waded in to dole out fines and bans for both, with their resentment easing over time.

3) Peter Schmeichel v Ian Wright
“And a good save by Schmeichel, the man who always seems to foil Ian Wright,” said John Motson, one of the live witnesses to the most tense game between two iconic rivals of the 1990s. Wright only ever scored once against Schmeichel, in a 1993 Charity Shield defeat, but their hostility was about much more than such trivialities.

Wright “genuinely hated” Schmeichel. Though the issue has long been cleared up, the Manchester United keeper was accused of racist abuse against the Arsenal striker during a Premier League game in November 1996. Criminal charges would not be dropped until a month after their next meeting the following February, when Schmeichel made a string of saves from Wright, both literally burst the ball after a 50/50 that would have made Lemar proud, and Wright launched into a two-footed tackle on the Dane that received not even a booking.

The pair reconciled in retirement as pundits at the 2002 World Cup. Schmeichel’s insistence a year later that “there was never anything serious between us” was patently untrue. His subsequent declaration that “he was the one guy I always wanted to stop” and Wright “looked at me and thought the same thing” was a much fairer assessment.

2) Patrice Evra v Luis Suarez
For some at Liverpool, there has been overdue repentance. That cannot be said for Luis Suarez, who declared in his 2014 autobiography that ‘I don’t ever plan to speak to Evra again in my life’, chastising the Manchester United left-back as ‘the innocent victim’ while he emerged ‘with my character tarnished forever’.

It was a shameful dispute that was soon entangled in tribalistic fandom. Liverpool and United fans became experts in lip-reading, colloquial Spanish and actual law, their opinions coincidentally married to the shirt they wore.

Suarez has only ever apologised for one aspect of his behaviour: refusing to shake Evra’s hand before a Premier League game in February 2012, four months after he was alleged to have racially abused the Frenchman, and two months after the FA handed him an eight-match ban, the Liverpool response to which was him, his manager and his teammates donning T-shirts supporting him before they played Wigan.

The obfuscation of his conduct and comments made it difficult for them to qualify for the criminal threshold of ‘beyond all reasonable doubt’, but more than a few lines had been crossed. Evra had his fun, celebrating in front of Suarez after a win at Old Trafford, then mocking his nemesis by biting into a severed arm during United’s title celebrations the following season. But the entire episode was deplorable.

1) Roy Keane v Patrick Vieira
The gold standard. A conflict that encapsulated the quintessential Premier League club rivalry, if not English football as a whole. In the top flight’s greatest period, Arsenal and Manchester United were the two greatest teams, managed by the two greatest managers, led by two of the greatest players.

It is impossible to do their storied history justice, from their clash in August 1999 to “I’ll see you out there”, Vieira suggesting that Keane “excited” rather than intimidated him in one of their many reminiscing sessions since feels apt.

So too does the fact they left within three months of each other, Vieira for Juventus in August 2005 and Keane by mutual consent that November. Iron sharpened iron and one seemingly could not exist without the other.

If you want to take your mind off coronavirus for a while, the excellent Keane-Vieira documentary is on ITV. The greatest rivalry the Premier League has ever seen. Two outstanding leaders and winners.