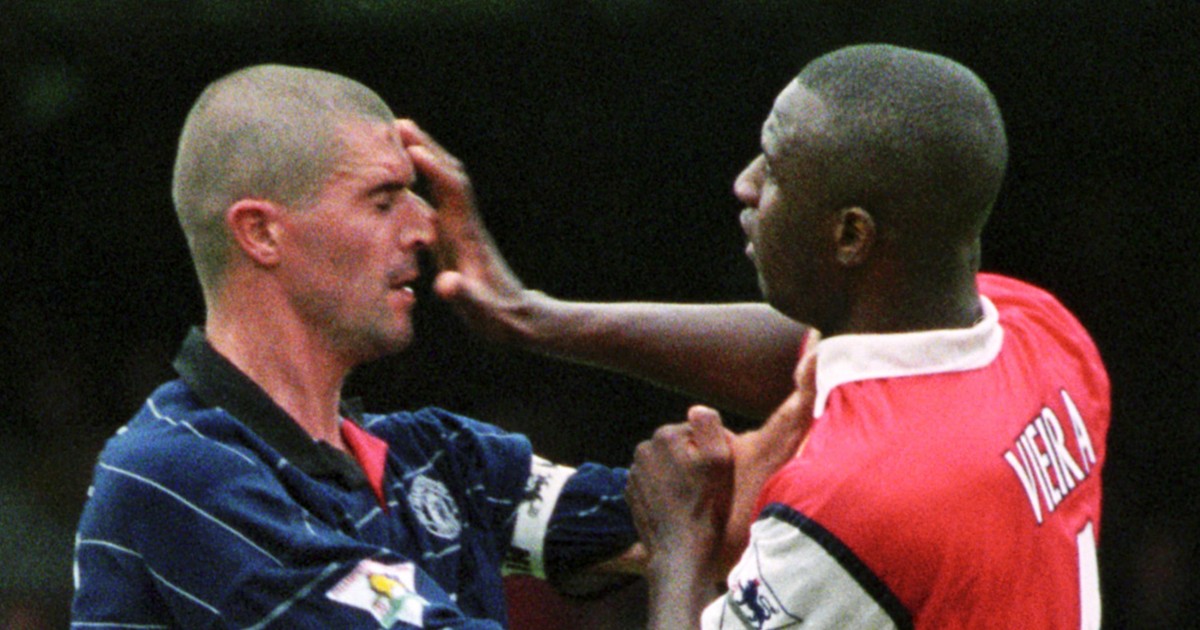 The 35th Royal Rumble is upon us so it’s time to announce and assess the entrants to the 30-man Premier League version. Roy Keane goes far.

Given the Super League proposal and television deals, it probably isn’t beyond the realms of possibility that the Premier League stage their own version of the WWE event. It might also be the only chance of anyone competing with Manchester City in the near future.

The rules are as follows:

Arsenal
Starting with an easy selection: the Swiss Superman, Granit Xhaka. He could win the whole thing, mouthguard and all, but is more likely to somehow get disqualified or eliminate himself. Obscenities towards fans guaranteed.

Aston Villa
Tyrone Mings is a wannabe hard man but lacks the talent for the Rumble, or a place in the England squad if we’re honest. Scotsman John McGinn will step in, channelling his inner Drew McIntyre and Groundskeeper Willy.

Brentford
The new kids on the block, they’ll be looking to make their presence felt in a battle royale. Pontus Jansson was considered but Ivan Toney gets the nod as a reward for his ability to deliver under pressure – he’s never missed a penalty so eliminations are a cert.

Brighton
A team far too likeable; it would be cruel to place a national treasure like Tariq Lamptey into the Rumble. Neal Maupay loves a bit of sh*thousery so he can rep the Seagulls. Like their xG, good build-up play and signature moves won’t be rewarded with actual eliminations.

Burnley
If this was managers, Sean Dyche would be odds-on favourite. From a squad used to scrapping for survival, Big Bad Ben Mee will look to go deep while exciting no neutrals.

Chelsea
Weirdly for a normally unlikeable club, their squad isn’t packed with the nastiness of old. Antonio Rudiger is probably the resident hard man – ask Kevin De Bruyne. Romelu Lukaku to complete his heel turn and throw Rudiger over the top rope?

Crystal Palace
After years of looking to compete at the highest level, Wilf Zaha gets his chance here. His tricks should make him a fan’s favourite and a good performance might finally get him that push from the Selhurst Park midcard.

Everton
A club experiencing civil war, the Rumble will see their own fans cheer against Jordan Pickford. Asked by no-one to compete, the English No. 1 will talk the talk but is predicted to be eliminated in record quick fashion.

Leicester City
Simple. Jamie Vardy. Born to battle against the odds. Fuelled by a strict diet of skittles and vodka. Winding everyone up. His wife’s account getting into it with Coleen Rooney at ringside. Icon. Should go far and nailed-on to give it the Hulk Hogan poses at some point, particularly if The Hawthorns plays host.

Liverpool
Virgil van Dijk’s hard and Andy Robertson is a pain in the you know what, but the honour goes to James Milner. Probably the only competition he’s not competed in during his career, his staying power and endurance should ensure an hour-long showing as the iron man from one of the first two positions.

Manchester City
The easy pick here is Ruben Dias, seeing as he’s made of granite. But like previous big games, Pep overthinks and sends out Jack Grealish as his representative. His new-found villainous status will likely lead to rivals teaming up on him. City will then sign the winner.

Manchester United
A club lacking much fight these days. Continuing the comedy club routine, McFred will enter as one; they’re really nothing without one another. Sir Alex Ferguson running down with a steel chair can’t and won’t be ruled out.

Newcastle United
Representing the Beautiful City of Jeddah and the Kingdom of Saudi A… sorry Newcastle, will be Jonjo Shelvey. The Toon Army terminator and Voldemort doppelgänger will try and buy his way out of trouble ala Ted Di Biase, ensuring he is backed up by outside interference. But possible Mike Ashley antics will undermine him.

Norwich City
The regular Canaries keeper moves from between the sticks to between the ropes to wreak havoc with his finisher, Krul Intentions. Norwich fans are just thankful relegation doesn’t exist in the Rumble. Delia Smith to accompany the Dutchman to the ring as his manager in a sort of Vickie Guerrero role.

Southampton
Another likeable side and club with limited options of nefarious players. Oriol Romeu is their stand out bad boy, so he’s going in to wind up Grealish and put someone through the Spanish announce table. National pride and all that.

Tottenham Hotspur
Antonio Conte gets banned from ringside for attempting to enter himself. Harry Kane dons a red and black mask with long-haired wig attached and wades his way through hellfire and brimstone as he looks to finally win something.

Watford
No Troy Deeney means Moussa Sissoko is forced to compete. Watford are undone by stable infighting as Roy Hodgson and Harry the Hornet get into it at ringside.

West Ham United
Michail Antonio is the pick of the bunch here, although Tomáš Souček can feel hard done by. Jamaica’s finest son will look to fellow Iron, Mike Tyson, for inspiration in landing the knockout punch.

Wolves
Completing another step in his road to full recovery, Raul Jimenez is the latest Mexican to enter the Rumble, mask and all. Jorge Mendes to use his stroke to ensure a No. 30 entry comes to Molineux.

Now that we’ve got the current players out of the way, onto the legends looking for one last shot at the big time, and really just an excuse for a scrap.

Roy Keane
Wrestling? Do me a favour. The obvious selection. The Stone Cold Steve Austin of the Premier League era. You just know he’d love a go at a few of the modern players, too.

Patrick Vieira
But where there is Keane, there is Vieira. The stand-off in the middle of the ring would be worth the entrance fee alone. It also gives Palace a player-manager duo, before one of them inevitably betrays the other and throws them over the top rope with a shrug.

Duncan Ferguson
Another manager, if a temporary one, strapping up for a last hurrah. Arguably the favourite to win it all, his patented headbutt finisher will be seen on more than one occasion.

Craig Bellamy
The Scrappy Doo of Premier League football – picked as you just know he’d be mouthing off the entire time, while armed with a golf club. A run-in from Graeme Souness is one to look out for.

Jose Mourinho
A master of the dark arts, Jose would have no friends in the Rumble – exactly how he likes it. He’s hidden in laundry baskets so he’ll likely scurry under the ring like a bigger and more annoying Hornswoggle. Machiavellian.

Sam Allardyce
He’d probably do anything if the money was right. A ring entrance to a Big Sam variation of the Big Show’s theme song could be an unexpected highlight.

Luis Suarez
The dirtiest player in the game – the no-rule format of the Rumble suits Luis down to the ground. He’ll leave his mark on the event, and probably on a few shoulders.

Thomas Gravesen
A man nicknamed ‘Mad Dog’, Gravesen prepared for the Rumble through brawling numerous teammates down the years. And if he tires, Lee Carsley can always be his body double sub.

Stuart Pearce
The man has ‘Psycho’ as his nickname.

Eric Cantona
Picked for the pre and post-bout promos he might cut as much as for what he’ll do in the ring. He probably won’t be there for long, as he disappears into the crowd in search of a Crystal Palace fan telling him to take an early bath.