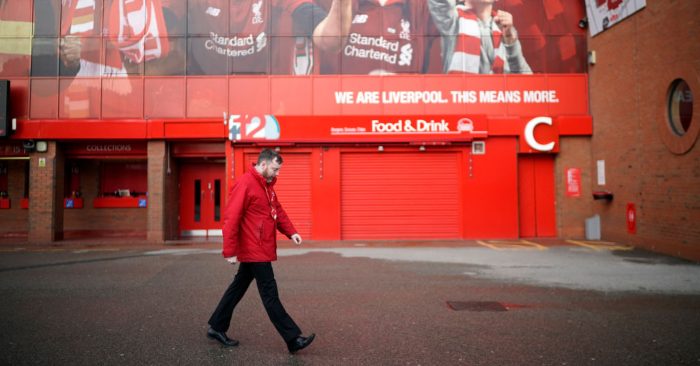 We have all had our fun. We have speculated about how every Premier League club would prefer this season to be decided (the punchline, of course, is that nobody but Liverpool wants Liverpool to be declared champions) and laughed at various invested parties for declaring their entirely objective opinion. But it’s becoming clearer every day that – megalolz aside – this season eventually has to be played to its conclusion.

When we say ‘has to’, it’s not with the misguided sense that any of this is incredibly important in the context of thousands of deaths and economic collapse, but because the idea that a season could ever just be abandoned is just too much for many of us to take right now. With the prospect of months inside with our previously loved ones looming, the very real possibility and in some cases inevitability of lost jobs, and the gnawing fear that we might lose vulnerable members of our families, we need the certainty that football brings. Matches last 90 minutes and seasons end with glory and promotion and relegation.

Right now, it does not and should not matter that we are talking about Liverpool or Leeds or Aston Villa or West Brom. We are way past the point of ‘wouldn’t it be funny if…’ or at least we should be; tribalism has now gone so far that we would not be surprised to read that somebody’s last breath was taken with an ‘at least I never saw Liverpool win the….’. But to echo the handwritten signs on a hundred high street pubs back when pubs were a thing, ‘no club colours’ should be seen in this debate.

Much has been written about pressure from broadcasters to finish the season, of avoiding the billable hours monsoon of an abandoned season and of issues surrounding the registration of footballers past June 30 but frankly, that kind of talk is for people in suits who can afford to work in their offices and studies (a word which will never not make me think of Uncle Quentin in the Famous Five) rather than on their sofas or at their kitchen table. For the rest of us, it really is simple: Football seasons should be finished.

UEFA and the FA seem to agree, with the latter’s chief executive Mark Bullingham saying that completing the season remains “the starting point of every scenario being mapped out”. Yes please. But this is a sport that – less than a week ago – was still planning to go ahead with the weekend Premier League fixtures, so we would not entirely be surprised if we have to wait 12 months to see another ball kicked. But when it is kicked, we want to see a one-sided Merseyside derby, a real Manchester United 3-3 Tottenham and a 0-0 shitfest between Burnley and Watford. We deserve that.