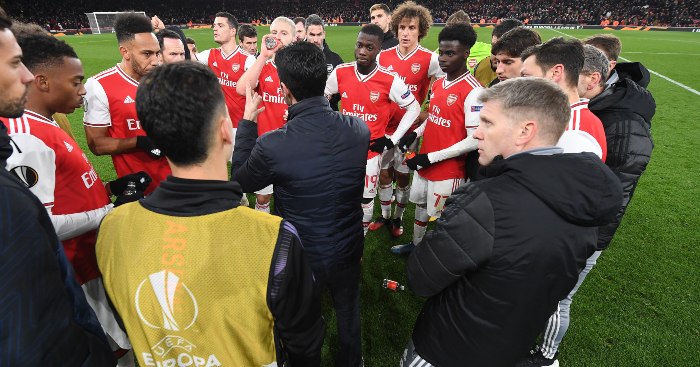 If the season is finished – some suggest it might be – then now is the time to review each club’s work during a curtailed campaign. We start with Arsenal because, the alphabet…

Best player: Bukayo Saka
Pierre-Emerick Aubameyang has done more than his fair share of the heavy lifting to carry Arsenal this season while Bernd Leno has bailed them out a little too often for the liking of any of their three managers. But Saka, a winger by trade, has been a revelation as an attacking left-back in his breakthrough season under Mikel Arteta.

His emergence has almost been an accident and due largely to the injury woes of summer signing Kieran Tierney and Sead Kolasinac. But Saka, who has played as a full-back in England’s youth teams, has seized the chance initially handed to him in Unai Emery’s final game in charge. Since then, he has missed only one Premier League match.

While finding his feet in senior football, the 18-year-old has posted some ridiculous numbers for a left-back. He has 10 assists in all competitions, more than any other Arsenal player; he’s the youngest player to assist in consecutive Premier League appearances since Francis Jeffers for Everton in 1999; he’s the first teenager to hit double figures for assists in a single season for Arsenal since Cesc Fabregas; only three players have recorded more assists in the Europa League this season.

No wonder Arsenal have hurriedly brought forward contract talks while big six rivals reportedly hover. Arteta says the club are doing ‘everything it can’ to tie down the teenager to a deal set to be a ten-fold increase on his current £3,000-a-week wage. Tierney’s fitness is not the only obstacle between the Scotland star and a regular game at Arsenal.

Biggest disappointment: Nicolas Pepe
The winger would not be the first player to take a year to settle in the Premier League and he spent the first half of his maiden campaign in an environment hardly suited for growth. But Arsenal fans have to hope that time is all Pepe needs because there is no doubt they expected more from their record signing.

It isn’t as though the 24-year-old is a kid. Yet Arteta, not the manager who signed him from Lille (though Unai Emery denies responsibility), has recently pulled Pepe up for his predictability. Playing on the right, opponents already know that the £72million man is going to cut inside on to his left foot.

“He needs to open more doors to be more unpredictable for the opponent and give more options as well offensively to us,” said Arteta recently of Pepe, who has given Arsenal four goals and six assists in the Premier League. Arsenal really expected more for their money.

Best performance: Arsenal 2-0 Manchester United
There had been glimpses of improvement in the three games after Arteta’s appointment but his first win as Arsenal boss – the Gunners’ first of the season against a team in the top half – soothed some of the edginess around the appointment of a managerial rookie. The Gunners were in full control of United, especially in a first half which produced a two-goal advantage by half-time.

Granit Xhaka and Lucas Torreira dominated their United counterparts while even Mesut Ozil put in a shift – the playmaker ran 11.54km, further than anyone else on the pitch. Winning with marginally less possession than United was a much-needed show of defiance at the perfect time after Arsenal had surrendered a lead to lose to Chelsea in their previous home game.

Worst performance: Watford 2-2 Arsenal
Arsenal were 2-0 ahead at half-time in this one too, but under Unai Emery, the Gunners wilted woefully in the face of a winless side at the bottom of the table.

Aubameyang scored twice to give Arsenal something to hold on to, but they willingly offered up that advantage first by fannying around at the back, before David Luiz suffered another brain fart to concede a late penalty. The Hornets finished with a club-record 31 shots on goal, 23 in the second half, while Arsenal hastily retreated from their position of superiority.

“No-one wanted the ball. In the end we are happy to take a point,” Granit Xhaka said afterwards.”We didn’t show our game in the second half, we were too scared.”

Biggest VAR moment: Alexandre Lacazette’s winner v West Ham (H)
The pivotal moment in their last game was only decisive because VAR overruled the on-pitch view that Mesut Ozil was offside when setting up Lacazette to score the winner in a barely-deserved London derby victory over West Ham. But it maintained their recent good form and allowed Arsenal to finish with five wins in their last six matches, with four clean sheets to boot.

Did their recruitment work?
In the short term, no.

Arsenal stunned everyone last summer, prior to which it was reported Emery had £40million to spend, by spluffing £72million on Pepe. As we’ve already discussed, it’s been a frustrating maiden season in England for the Ivorian winger. Most of their other summer signings struggled to impress for a variety of reasons. William Saliba because he’s at St Etienne; Kieran Tierney because he’s been crocked; Dani Ceballos because he’s been inconsistent; and David Luiz because he’s David Luiz.

Gabriel Martinelli bucked that trend, though, and he looks like a very astute addition. Pablo Mari, another recruit from Brazil, might be another, but the lurgy struck immediately after his Premier League debut. Still, at least he has pulled on an Arsenal shirt, which is more than can be said for Cedric Soares.

Dick move: Their captain telling 60,000 fans to ‘f*ck off’
Sticking with Emery for so long was one; suggesting that the fans’ negativity and ‘noise’ was in part to blame for the Spaniard’s struggles was another. But an undignified public fall-out between the Arsenal supporters and their captain surely takes the cake.

Xhaka has copped flak from the home support at the Emirates ever since he arrived. Some of it fair, some not. Regardless, there are right and wrong ways to respond. Xhaka chose the latter when he was jeered upon being substituted during a home draw with Crystal Palace.

The £35million midfielder was taking his sweet time to exit the stage, giving Arsenal fans more time to vent their fury at a player who had become a symbol of everything that was wrong with Emery’s Arsenal. Xhaka responded by goading the crowd, removing his shirt while appearing to tell most of the home support to ‘f*ck off’.

“He is now devastated – devastated and sad,” said Emery after, who had little choice but to take the armband from Xhaka. Fair play, though, to the midfielder. After being shown some love by Arteta, he turned down a January exit to Hertha Berlin and is steadily rebuilding his reputation under the new manager.

Manager’s job security:
Arteta is perhaps the safest of any manager in the Premier League not named Jurgen. Like Ole Gunnar Solskjaer, he has the ‘one of us’ factor with supporters and though he too has no top-level management experience, it is presumed that some of Pep Guardiola’s magic must have rubbed off on the Spaniard.

It looked as though Arteta was falling into the trap of trying be Pep MkII when he stood on the sideline dressed as his mentor’s clone but there is evidence of the rookie boss trying to be his own man, and copying the best coach in world football over the last decade is hardly the worst policy. He will need time and resources to turn Arsenal into what he wants them to become, but Arteta will surely get both.

What they need this summer
Very similar to what they needed last summer: a centre-back, a midfielder, a wide forward and a centre-forward should Aubameyang, 31 in June, decide he’s too old for this sh*t.

Arsenal have signed centre-backs in the last two windows, but we know little of what to expect from either Saliba or Mari. Arteta admitted he was ‘obligated’ to reinforce the heart of his backline and you can judge for yourself whether that objective was achieved. But there seems little question that a proven, dominant leader in the centre would still make a huge difference to a defence which has spent much of the last couple of seasons treading on rakes.

With Ceballos set to return to Real Madrid and doubts over Torreira, Guendouzi and Xhaka, Arteta would doubtless love to pick his own man to boss his engine room. Atletico Madrid’s Thomas Partey has been heavily linked, while Diogo Jota has also been named as a target as the Gunners look to reinforce their front line amid speculation over Aubameyang and their ongoing quest to rid their books of Ozil’s salary.