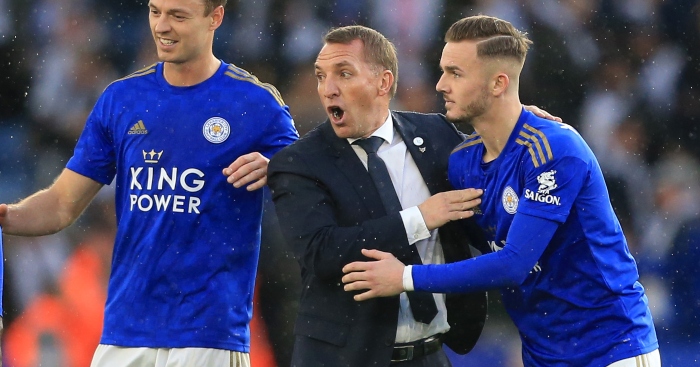 Leicester are Champions League-bound and Jamie Vardy’s on fire. Brendan Rodgers is on to something…

Best player: Jamie Vardy
This a close call – and we’re still not convinced it’s the right one. Jonny Evans has been outstanding at the back, probably worthy of the spot next to Virgil van Dijk in the PFA Team of the Year, should they ever get around to deciding upon one.

Ricardo Pereira, Leicester’s reigning Player of the Year, and Wilfried Ndidi would also be deserving of this title. But in a crowded Premier League field of top-class strikers Vardy, aged 33, leads the Golden Boot and was on course to match his most prolific season ever.

Vardy has done that despite going through a two-month drought between Christmas and February that coincided with five of Leicester’s eight defeats, which highlights the importance of the veteran to the Rodgers grand plan to storm the Champions League.

30% – Since the start of last season, Leicester have only won 30% of their Premier League games when Jamie Vardy hasn't started (3/10), compared to 49% when he has featured in the starting XI (27/55). Quandary. pic.twitter.com/IHdYWlQvTG

Biggest disappointment: Youri Tielemans
The Belgium midfielder is merely a victim of his own exceptional standards set last year during his loan spell at the King Power Stadium.

Tielemans snubbed the advances of grander clubs to sign permanently for the Foxes after scoring three goals and creating another five while on loan from Monaco for the second half of last season. He has matched that tally once more – but in more than double the number of matches.

Rodgers sat Tielemans on the bench for a couple of games in January – defeats against Southampton and Burnley – and the 22-year-old admits he had “a bit of a set-back” with his form. He wouldn’t be the first foreign talent to suffer in that difficult second season and the fact he is being picked on at all only highlights the quality throughout Leicester’s squad. No one has stunk the joint out. Except perhaps Demarai Gray.

Best performance: Southampton 0-9 Leicester
There’s no point trying to be contrary – the Foxes demolition of Saints was one of the Premier League’s most ruthless-ever performances.

Scoring nine equalled the division’s biggest ever win, a record previously held by Manchester United when they pulled Ipswich’s pants down at Old Trafford. But Leicester should take the record with the tie-breaker being that the Foxes enjoyed their rout away from home. Indeed, it was the biggest ever victory by an away side in the top flight in the 131-year history of the Football League.

“I’m very pleased how we defended,” said Rodgers, somewhat burying the lede. “And we were ruthless. We were ruthlessly simple in our game.”

It helped that Saints were mind-bogglingly sh*te. Leicester mustered up 25 shots, of which 15 were on target. Only two sides have had a better shot conversion rate in any game this term – one of them is Leicester themselves when they tonked Newcastle 5-0.

Worst performance: Leicester 1-2 Southampton
Although Ralph Hasenhuttl insisted they weren’t motivated by revenge – come on, Ralph – Southampton reclaimed some of their pride by taking back three points from their trip to Leicester in January.

Rodgers’ side looked heavy-legged from the off, which is perhaps not surprising since they had played nine matches in 28 days before Saints came to the King Power. The visitors were thoroughly good value for their victory, having peppered Leicester’s goal with 16 shots, 10 of which were on target, while the hosts could only conjure up five efforts.

After back-to-back home defeats for the first time under Rodgers, the manager admitted it wasn’t good enough: “The performance probably didn’t merit anything from the game,” he said. “We didn’t press the game strong enough, or well enough, and then when we had the ball, we made too many mistakes when we had the ball.

“So, it looked like up until the end, it was going to be a draw, which we would have taken because we didn’t play well. However, they played through our midfield too easily and then they get in and get the goal, so a disappointing result for us.”

Biggest VAR moment: Kelechi Iheanacho’s winner against Everton
That defeat to the Saints might have been a draw were it not for VAR after Evans’ 90th-minute equaliser was ruled out for offside. But Leicester had their fun against Everton back in December.

It was typical of Marco Silva’s luck for his side to hold the Foxes into injury-time as they edged towards a creditable point. It seemed that Everton had escaped a hammer-blow defeat when Iheanacho was flagged offside after a ruthless finish past Jordan Pickford, but the officials in the Stockley Park cupboard dropped Silva deeper into the mire when they adjudged the Leicester substitute to be onside by a cat’s c*ck hair.

The linesman’s decision being overturned kept the Foxes on a seven-game winning run and it was celebrated as joyously as any goal at the King Power this term.

Dick move: James Maddison’s casino trip
Maddison has struggled to convince Gareth Southgate of his credentials for this England side but the Leicester playmaker received a call-up for the Czech Republic qualifier in October. Falling ill with flu couldn’t be helped. Being pictured at a poker table on the night the Three Lions fell to a defeat definitely could.

Rodgers tried to defend his player, saying he went to the casino to watch the game after catching the first-half at home. He couldn’t go to his parents because they were in Prague having booking a trip to watch their son. So, obviously, the only alternative was a casino…

“Probably he’ll make better decisions in his life,” admitted Rodgers. You think? “You want to be high performance, low maintenance,” responded Southgate, who appears to have given Maddison the benefit of the doubt.

Did their recruitment work?
Leicester’s greatest success was not in the players they recruited but those they did not.

With £80million burning a hole in their pocket, the Foxes resisted the temptation to splurge their Harry Maguire windfall on an over-priced replacement, choosing instead to trust Caglar Soyuncu. It was an inspired decision, with the Turkey defender forming a hugely impressive partnership with Evans.

Maguire’s sale meant Leicester had a net spend of around £15million last summer. There were no qualms over spending a club record £40million on Tielemans, though chucking £30million at Newcastle for Ayoze Perez raised a few eyebrows. The attacker is yet to convince anyone that he was worth that outlay.

Dennis Praet and James Justin both looked like rather more savvy acquisitions and the season shut-down has come at the wrong time for both, with Praet starting to show some impressive consistency in Leicester’s midfield, while Justin was due a run in the side in Pereira’s absence.

Leicester’s recruits from last summer may not have made a huge impact this season but there is plenty of optimism that it will turn out to be an astute window’s work.

Manager’s job security:
Now less than four months into a new five-and-a-half-year contract, B-Rodge is sat smugly and snugly in the Foxes hot-seat. Having been offered new terms to persuade him to snub Arsenal, only the lure of one of the truly big-hitters might tempt him away from a role which reportedly pays him more than Jurgen Klopp gets for bossing Liverpool. Apparently, only Pep Guardiola and Jose Mourinho have a fatter Premier League pay packet at the end of each week.

Rodgers has everything he needs at Leicester: an exciting young squad; the financial clout to add to it; the Champions League platform he feels he deserves; and a shiny new training complex under construction. Likewise, the Northern Irishman has demonstrated to Leicester in a year that he is a suitable candidate to lead them into a potentially exciting future.

What they need in the summer:
Not signing a centre-back worked splendidly last summer. This time, with European football crowding their schedule, there is a need to add cover in the heart of their defence. Rodgers borrowed Ryan Bennett for the second half of the season but the Wolves loanee hasn’t yet made a matchday squad since his deadline day arrival.

At left-back, a bad summer could see Rodgers could lose both senior specialists. If anyone meets their valuation, then Chilwell could get his big move and Christian Fuchs is out of contract, even though Leicester are tempted to dangle another extension under the nose of the Austrian who will be 34 next month.

In a perfect world, Rodgers might like to add a winger and another centre-forward since cover in both areas requires players to operate out of position. But once again, the priority for Leicester is preservation and the retention of players like Maddison and Chilwell. Achieve that and add some depth, and the Foxes will be set.