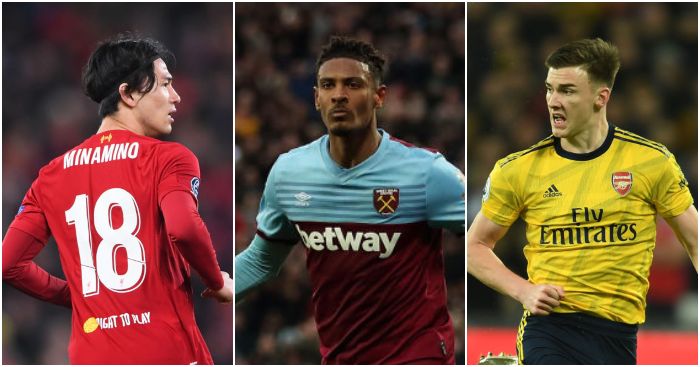 92) Emil Krafth (Amiens to Newcastle, £5m)
He has lovely hair but just six Premier League starts, although two of those were wins over Tottenham and Chelsea.

91) Ignacio Pussetto (Udinese to Watford, £6.8m)
That’s a Pozzo. Nigel Pearson has seen fit to give the forward no more than 16 minutes each in  his six Premier League appearances. He will be sold to Granada for at least £10m soon.

90) Panagiotis Retsos (Leverkusen to Sheffield United, loan)
There can’t be many players in history who have featured in the Champions League and been bound to the Sheffield United bench in the same season.

88) Angelino (PSV to Manchester City, £5.3m)
He wasn’t bad – except during an “absolutely awful” pre-season – he was just never suited to City. RB Leipzig, who could make his January loan permanent after an impressive start, is much more like it.

87) Callum Robinson (Preston to Sheffield United, £7m)
They can never take Stamford Bridge away from him. He has dropped back to more familiar climes with West Brom on loan, scoring twice in eight games.

86) Arnaut Danjuma (Club Brugge to Bournemouth, £13.5m)
“He’s understandably been very frustrated by his injury,” said Eddie Howe last month. You’d be a bit pissed off if two lengthy spells out restricted your first Premier League campaign to nine appearances, of which none were wins.

85) Luke Freeman (QPR to Sheffield United, £5m)
It feels an awful long time ago since he became the record signing for the newly-promoted Blades, who appear to have outgrown him.

84) Erik Pieters (Stoke to Burnley, £1m)
Rarely has a transfer ever seemed so right. The ordinary Dutchman started the season at left-back but has long been phased out.

83) Andy Carroll (unattached to Newcastle, free)
*Checks notes*. Has been out since mid-January after exacerbating an existing injury in training by trying to volley a ball. Of course. But he did assist four goals in five December games.

82) Ondrej Duda (Hertha Berlin to Norwich, loan)
No goals or assists in seven Premier League games is not the most compelling argument for a permanent move.

81) Danny Rose (Tottenham to Newcastle, loan)
Presumably still Googling his way through his new teammates. He had better finish up by the summer because he hasn’t done all that much to persuade Newcastle to keep him.

80) Scott Banks (Dundee United to Crystal Palace, £250,000)
Signed from Dundee United, currently top of the Scottish Championship, and loaned out to Alloa in eighth. Savvy.

79) Nathan Bishop (Southend to Manchester United, undisclosed)
“He just said to enjoy it and work as hard as you can and give everything you’ve got and be positive and just have a smile on your face,” was the purest form of Ole Gunnar Solskjaer advice possible handed down to the 20-year-old goalkeeper.

78) Luke Matheson (Rochdale to Wolves, £1m)
Is locked in a perennial, narrative-guided cycle of having an exam the morning after every game.

77) Craig Dawson (West Brom to Watford, £5.5m)
Has started 17 league games but missed both the wins over Manchester United and Liverpool. And is somehow still 29.

75) Harvey Elliott (Fulham to Liverpool, undisclosed)
He was thought to be “not too far” away from the first team of the world champions in December. Imagine what he’ll be like when he’s not still bloody 16.

74) Joao Pedro (Fluminense to Watford, £2m)
Liverpool apparently tried to hijack a deal last summer for a teenager who is yet to make his Premier League debut.

73) Pablo Fornals (Villarreal to West Ham, £24m)
Two goals and five assists in his debut Premier League season is not terrible, but it took him until November 30 to register one of either.

72) Mbwana Samatta (Genk to Aston Villa, £8.5m)
Who else can claim to have scored against Liverpool and Manchester City this season?

70) Takumi Minamino (Salzburg to Liverpool, £7.5m)
It’s not easy getting past that Liverpool front three. But he’ll bag a Premier League winner’s medal for his troubles.

69) Moussa Djenepo (Standard Liege to Southampton, £15m)
Scored in consecutive league games in August and September but not since. The 28th-minute red card in his last match against Newcastle will be enshrined as his most recent contribution for a few months yet.

68) Trezeguet (Kasimpasa to Aston Villa, £8.75m)
Can’t live off the winner in the Euro 2000 final forever. He sent Villa to Wembley again but three league goals have all come in defeats.

66) Valentino Lazaro (Inter Milan to Newcastle, loan)
Five wins in six Serie A appearances, then one win in four Premier League games. It seems that Inter Milan are better than Newcastle.

65) Jean-Philippe Gbamin (Mainz to Everton, £25m)
Came, played 135 minutes of Everton’s first two games in which they drew and won, then succumbed to an injury that has sidelined him since.

64) Sebastien Haller (Eintracht Frankfurt to West Ham, £45m)
Much like everyone else, just needed David Moyes to come along and rescue him.

63) Matt Targett (Southampton to Aston Villa, £11m)
Has the second highest cross success rate of all Premier League full-backs this season. You could say he has become rather adept at hitting the…*ahem*…spot! Or target. You choose.

62) Tariq Lamptey (Chelsea to Brighton, £3m)
Frank Lampard clearly liked him. He hasn’t actually played for Brighton yet but that cameo for Chelsea against Arsenal probably elevated him to greatest Lamptey in Premier League history.

61) Douglas Luiz (Manchester City to Aston Villa, £12.5m)
Only Jack Grealish and Tyrone Mings have been given more minutes for Aston Villa in all competitions this season. It’s just a shame he’s been…not great for the last few months.

60) Kieran Tierney (Celtic to Arsenal, £25m)
“Being injured at the start of my Arsenal career was hard. Mentally, it was probably the toughest time of my life,” said Kieran Tierney earlier this month. Recovering only to be sidelined with a different issue will only make things worse.

58) Pedro Neto (Lazio to Wolves, £16.5m)
He has had an impact – VAR permitting – in the Premier League, but also scored an equaliser against Olympiakos in the Europa League last 16 first leg. Room for improvement but not bad.

57) Tomas Soucek (Slavia Prague to West Ham, loan)
Ran really far (in a game where West Ham were forced to chase the ball throughout) that one time. He does look decent.

56) Pepe Reina (AC Milan to Aston Villa, loan)
His last Premier League clean sheet came in May 2013, which would be damning were it not for the fact he has an entirely fictional defence in front of him.

54) Joao Cancelo (Juventus to Manchester City, £60m)
Manchester City are really good at spending money on defenders who do not solve escalating problems.

53) Bjorn Engels (Stade Reims to Aston Villa, £7m)
And through it all, he offered them protection at the start of the season. But he is now on an eight-match Premier League losing streak.

52) Jack Stacey (Luton to Bournemouth, £4m)
He has not quite wrestled that right-back spot from Adam Smith. Next season will be the one, but when and in which division?

51) Pablo Mari (Flamengo to Arsenal, loan)
Managed to almost completely nullify the world’s best attack. But as good as he was against Michail Antonio and Sebastien Haller in his only Premier League game to date, he was also excellent against Liverpool in the Club World Cup final.

50) Cenk Tosun (Everton to Crystal Palace, loan)
Etihad. Corner. Kelly. Limbs. It won’t be enough for a permanent deal at the figures mentioned, but still.

49) William Saliba (Saint-Etienne to Arsenal, £27m)
Perhaps the only Arsenal centre-half to have his reputation properly enhanced. Even then, Saliba’s Saint-Etienne are a place above the relegation zone with the third worst defensive record.

48) Daniel Podence (Olympiakos to Wolves, £19m)
Liverpool might be the only Premier League club with a forward line as comparatively difficult to dislodge as Wolves’. Diogo Jota, Raul Jimenez and Adama Traore aren’t going anywhere anytime soon but Podence is pushing.

47) David Martin (Milwall to West Ham, free)
Has as many Premier League clean sheets in five starts as Adrian in nine and Hugo Lloris in 12. If he carries on he’ll breach the Golden Oldies XI.