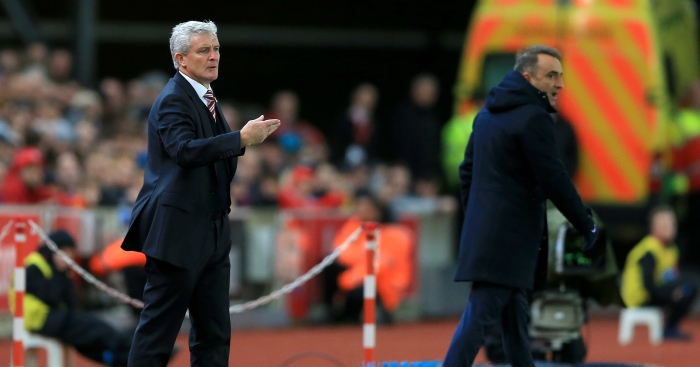 Why do managers play it safe?

The obvious answer: they think it’s the best chance at a result. Or, in the larger sense, to save their phony baloney jobs (it’s a line from Blazing Saddles). A few disasters always look worse than a series of meh results. But the safe play happens so often that you get the sense it runs deeper, that it’s a fundamental instinct, something on the order of fight-or-flight. When threatened, amoebas put out pseudopods and change direction. Wild deer run away. Managers invert the pyramid.

Hughes has considerable previous in this regard. Playing away against strong teams, his usual tactics are to sit back and get overrun. Check Stoke City’s results this season at Chelsea, Manchester City, Tottenham and Manchester United. Or rather don’t, because they’re much too ugly.

But the opponent this time was Arsenal, and although the Gunners play well at home, and had won their last two league matches at the Emirates by 3-0 scores, the hosts were, in principle, vulnerable. All their eggs are in the Europa League basket these days, and they had played on Thursday night. Plus, this was Arsenal, weak at the back, subject to odd bouts of what one might call mental un-strength. This was an excellent opportunity to come out firing and fighting.

Hughes would have none of it. The Saints came out in a conservative 5-4-1. When, in the 17th minute, Shkodran Mustafi was caught daydreaming about how he used to be a footballer, it seemed the right strategy.

At which point it was back to the usual program: sit back, get overrun. Arsenal found their stride, took the next 10 shots in the match, and scored twice. Only the early second-half heroics of Alex McCarthy kept it close. Finally Southampton realized that, to get something out of the game, they had to commit players in attack. The Gunners proved as vulnerable as expected, and Southampton were the better side the rest of the way. They outshot Arsenal 10-3, equalising in the 73rd minute, only losing to Danny Welbeck’s late goal when McCarthy might have come off his line to punch.

I know what you’re thinking: it almost worked, didn’t it? Yes, almost. But this is a relegation scrap, and almost doesn’t count. You absolutely need results, particularly if you start the day three points deep in the drop zone. Maybe if Hughes had gone for it from the beginning his side would have lost 5-0. But he was unprepared to risk, and unless you’re a great defensive manager, like Mourinho, Dyche or Allardyce, sitting back is just waiting for the axe to fall.

After the match Hughes was quoted as saying “I think we came here with a game plan which for the most part worked.” Q.E.D.

Going into the match at The Hawthorns, Swansea were three points above the relegation zone. Their following three opponents would be well above them in the table: Everton (H), Manchester City (A), Chelsea (H). They were playing away, but against by far the worst team in the league, one which had lost their last nine games in all competitions. Yes, Alan Pardew was gone, but he hadn’t been replaced by Pep Guardiola. Three points were a real possibility. Everything screamed ‘take the game to the opposition’.

They didn’t. Swansea set up in an ultra-conservative 5-4-1, simply letting Albion have the ball. At half-time, West Brom, a team averaging less than 44% possession this season, were cruising with 58%. And it’s not as if the Baggies were doing anything dramatic themselves. Darren Moore, the caretaker manager, had put his side out in an absolutely conventional 4-4-2. But in the first half Swansea managed only three shots, none on target, although admittedly Andre Ayew’s 39th minute chance was quite presentable.

In one sense the tactics had worked: West Brom had managed only one shot on target themselves, and that from a set-piece – although Lukasz Fabianski had been forced into a brilliant save on Jay Rodriguez’s blast. Swansea went into the locker room comfortable enough. But in a game like this one, to play for 0-0?

It almost cost them, too. In the 54th minute Rodriguez scored in a sequence following a set-piece, and suddenly the Swans were facing defeat. (There was a disputed handball in the buildup, but that’s beside the point.) Only then did Carvalhal switch personnel and formation, bringing on Nathan Dyer and going to an attacking 4-3-3. Even so, Swansea only equalised from a corner kick, Tammy Abraham doing the honors.

Afterwards Carvalhal said he had expected to play more on the front foot, implying that Swansea’s two previous matches, against Spurs and Manchester United, had led the team instinctively to protect their goal. But of course it’s the manager’s job to say “it’s West Brom, lads” and follow through.

But he got away with it. Given the results elsewhere, a draw was a decent result. Swansea are farther from the drop zone now than when the weekend began. They’re still good odds to survive. Yet two more points would have been very useful, especially since they won’t get an easier opponent until the last week of the season, and even then only if Stoke City are already relegated.

I’m not saying the riskiest move is always the best. There’s a time and place to risk. But for both Hughes and Carvalhal, this weekend looked as good a time as any. Well, OK, maybe I’ve been too tough on them. It’s easy to be wise after the event, and instinct is very hard to override. I don’t expect wild deer to be eating out of my hand any time soon. But when it comes to the so-called higher animals, I admit I’d like to see a little less wondering ‘Do I dare?’ and a little more of the audere est facere.