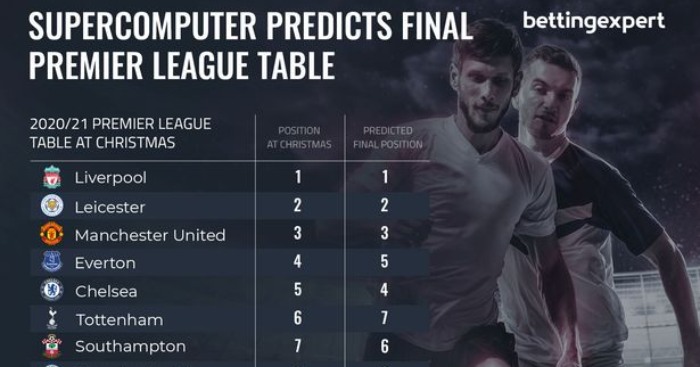 Supercomputer studies
There’s nothing Mediawatch likes more than a supercomputer predicting the Premier League table. Especially when the supercomputer is actually just a person working out some averages with a calculator.

‘Premier League supercomputer predicts Arsenal will get WORSE but just avoid relegation… with Chelsea in top 4’ – The Sun.

‘ARSENAL will escape relegation this season… but only JUST.

‘That’s the verdict of a Premier League supercomputer which predicts the floundering Gunners are going to get even WORSE before surviving by the skin of their teeth.’

At what point will they explain that the ‘Premier League supercomputer’ simply worked out average finishes of teams in every position at Christmas and this is not a ‘verdict’ at all but a calculation based on the team (any team) in 15th on December 25 finishing in an average of 16th place?

We could dwell on the fact that the prediction is entirely skewed by this Christmas coming at an entirely different juncture of the season, but surely The Sun will soon explain that this is not a ‘prediction’ at all but simply a list of averages based on the last ten years…

‘There’s better news for fans of London rivals Chelsea though, who are set to squeeze into the final Champions League spot.’

‘While Manchester City are predicted to finish EIGHTH after their uninspiring beginning to the campaign.’

Of course they are. Because they are already EIGHTH. And this supercomputer takes no notice of games in hand. Or form. Or indeed the fact that this is Manchester City.

‘Arsenal are 15th in the Prem at Christmas with manager Mikel Arteta odds on to no longer be their manager by the end of the season.

‘The North Londoners have made their worst start to a top flight campaign since the 1974-75 season.

‘And things aren’t going to get much better with Arsenal set to be leapfrogged by FULHAM and finish 16th, according to Bettingexpert.com’s Super-computer.’

Alternatively, it’s a person with a calculator working out averages.

Swipe Out
‘ARSENAL outcast Mesut Ozil has appeared to take a thinly-veiled swipe at boss Mikel Arteta by stating the club are ‘really missing’ Arsene Wenger’ – The Sun.

Listen, if you’re having to caveat your ‘thinly-veiled swipe’ with an ‘appeared’ then you know full well that you are talking absolute monkey bollocks.

The man was asked if Arsene Wenger was like a ‘father figure’ to him and he replied: “He was really a fantastic manager – yeah, and also like a father figure for me and many other players. I think many people around Arsenal are really missing him.”

Mediawatch is really missing its mum this Christmas; is that a thinly-veiled swipe at the missus? Well it appears to be.

Clone star
Elsewhere on The Sun website, Jon Boon is taking a break from allowing us to ‘meet’ (look at Instagram pictures of) WAGs by bringing us news of a promising young Arsenal player, who – the headline tells us – ‘has been likened to Man City legend David Silva’. Wow. He must be some player.

‘FORGET dipping into the transfer market this January.

‘Arsenal could well promote from within, if they are looking for a creative spark to fill the void left by Mesut Ozil’s absence.

‘And it comes in the shape of 5ft 5in playmaker Ben Cottrell.

‘The talented midfielder is highly thought of at London Colney and is one of the more regarded prospects in the academy, along with Miguel Azeez.

Then he really must be the real deal. Who has compared him to the great David Silva? Mikel Arteta? An Arsenal youth coach? Team-mate? David Silva himself?

The kid is outstanding. He might be out David Silva

After that glowing recommendation from none other than Good Ebening, why the hell isn’t Mikel Arteta playing this David Silva clone? Sack him now.

Shithouse tweet of the day
The Mirror know exactly what they are doing with this big stirring stick:

Toddle off
Oh and…

He’s a professional athlete battling for his career, he wasn’t having a ‘tantrum’. pic.twitter.com/KsM9U4PSFC

And as for ‘wasting chance to impress’…Spurs fans voted him their man of the match.

Enough about you, let’s talk about me…
Some excellent opportunism from the Manchester Evening News here…

And, pray tell, what is the ‘Manchester United news and transfers LIVE Mauricio Pochettino latest’?

Scrolling down we are told ‘How the PSG managerial change could affect United’.

Is it ‘not at all because Manchester United already have a manager’?

Yep yep. As you were.

Echo beach
Still, at least they are not writing a slug that includes the words ‘transfer-news’ and ‘coutinho-liverpool-transfer-premier-league’ and a headline of ‘Philippe Coutinho on Liverpool, Jurgen Klopp and a future in the Premier League’ that contains absolutely nothing but old quotes.

Because who would do such a cynical, wretched thing?