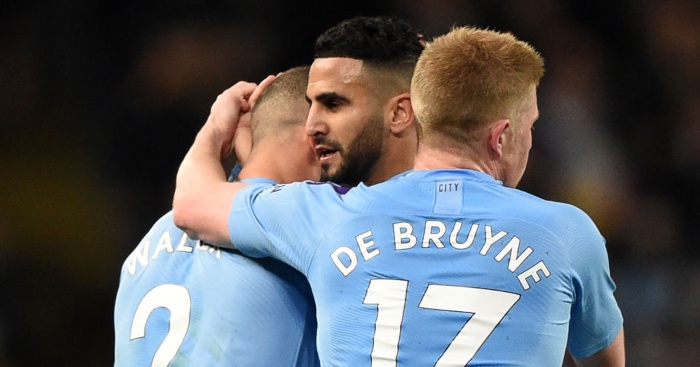 So we might have seen the last football of this Premier League season. So it’s the perfect time to work out the perfect team.

Before we start, players must have started at least 15 of the 28/29 Premier League games that make up this not-quite-finished season.

Was it ever in doubt? With just 11 goals from 56 shots on target, the Brazilian has a ridiculous save completion percentage of 80.4%. Next on the list would be Crystal Palace’s Vicente Guaita with 75.9%, with Dean Henderson (75%) the only other three-quarters man who fits our criteria.

Alisson because very little gets past him. https://t.co/9sFR0ndEM5

The man with the lowest save percentage with 15 Premier League starts? Dodgy Kepa with an near-unbelievable 53.4%.

Now this is awkward. While Trent Alexander-Arnold creates all of the chances – taking corners and free-kicks certainly helps that particular cause – it’s in the tackling department where Djibril Sidibe, Ricardo Pereira and Aaron Wan-Bissaka excel. But Sidibe gets the nod because he emerges with the ball more often than Pereira and tackles at a greater volume than Wan-Bissaka, though that sounds basically impossible.

And yet he is definitely not a favourite among Everton fans…

Find a club for any of them in the summer and I’ll drive them there myself.

Mistakes, he makes a few. And he is far too often still turning (and then dragging down) when an opposition player is clear between him and the goal. But deliver him the ball at his feet and 92.4% of the time he will find a teammate, giving him the best pass completion rate of any Premier League footballer, never mind centre-half. Basically he is like a sh*t Fernandinho. And City need an upgrade.

Keeping good company not far below the City boys are Norwich’s Ben Godfrey and Leicester’s Caglar Soyuncu, both in their maiden full season in the Premier League.

We told you back in November that Wily Boly would likely be replaced in this team because injury would see him fail to match our criteria. The next cab off the rank was then Joel Matip, but the Liverpool man was foiled by a) his knee and b) Joe Gomez.

So we land on Steve Cook, who makes more clearances per 90 minutes than any other Premier League player and wins more aerial duels than all but James Tarkowski, Virgil van Dijk, Harry Maguire and a pair of Everton leapers. Odd then that Bournemouth’s defence is still sh*t.

The perfect left-back. No wonder we studied him to discover what a left-back actually does during a Premier League game. He creates more chances than any other left-back – by some distance – and is not too shabby at tackling either, coming away with the ball 58 times from 83 attempts.

Wolves’ Jonny would have got the nod on tackles alone, but creatively he falls way short of Digne, Andrew Robertson and a host of others. Digne was poor against Chelsea last week but he was absolutely not alone; they were rotten to a man.

Digne is shocking in 442. Doesn’t have the legs or the pace to get up and down

Seriously so far ahead of the competition that we will not embarrass them by mentioning their names here. The man is a machine. He made nine tackles in a game Leicester won 5-0, for God’s sake. With him, Leicester have won 63% of their games this season; without him, that figure drops to 43%. So wonderfully consistent, his last three Premier League starts have all brought seven combined tackles and interceptions.

A list of elite passing midfielders happy to dominate possession is made up entirely of Manchester City and Chelsea players with Rodri being joined by Mateo Kovacic, Ilkay Gundogan and Jorginho. The Spaniard also has the second best pass completion rate in the Premier League behind City teammate Otamendi. The observant among you will have noticed that all that passing did not earn them a proper title challenge. City should still build around him, mind.

He is simply without equal. He creates 4.0 chances per 90 minutes, which makes this the most productive season of all KDB seasons. No other attacking midfielder comes close to the Belgian, who has been credited with 16 assists in 26 Premier League games.

Second in this particular list would be Norwich midfielder Emiliano Buendia, who creates 3.3 chances per 90 minutes but has seen his chances converted just seven times. Oh to be supplying the bullets for Sergio Aguero…

What an astonishing season from an astonishing player. Traore – long derided as having no end product and no discernible control over his own limbs – goes past the opposition an incredible 6.8 times per 90 minutes. Which puts him way ahead of Allan Saint-Maximim, a bit more ahead of Wilfried Zaha and a lifetime ahead of everyone else.

Adama Traoré completed more take-ons vs Brighton (5) than any other player on the pitch.

He came on with 26 minutes to go… pic.twitter.com/TVgcMNoBqP

You would be forgiven for thinking that Manchester City were the best team in the Premier League by some margin when you see that Mahrez – who only just sneaks into this XI having started just 15 games – is far more dangerous than Sadio Mane (our player of the season) or Mo Salah when it comes to creating chances and getting shots on target.

On the metric of shots on target per 90 from an attacking midfield position, he sits behind only Marcus Rashford and Salah (and ahead of Mane), but he creates more chances than all those players by a massive margin. Only De Bruyne and Alexander-Arnold have logged more assists this season and the Algerian has played roughly half the available minutes in the Premier League. Has Pep Guardiola erred by not playing him more?

Most chances created/90 mins in the PL since Bruno Fernandes’ debut (among players with 90+ mins):

19 goals from 57 shots. And that includes a wretched seven-game spell when he took 11 shots but did not score once. The xG tells you that Vardy should actually have scored about 14 goals – the same number as Dominic Calvert-Lewin and Chris Wood. He is simply a supreme finisher.