Home F365 Features Time to go: One from each PL club still looking for an escape 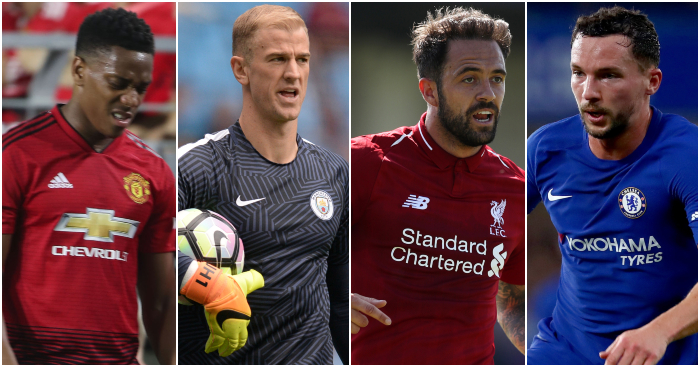 Arsenal: David Ospina
There were already too many goalkeepers at Arsenal before Unai Emery signed Bernd Leno, who is almost certain to start as No.1 ahead of Petr Cech. The Czech veteran, despite being the subject of far-fetched links with Chelsea, is not agitating to move so he appears willing to fight what seems to be a losing battle. For Ospina, though, his days are numbered. The Colombian has a year remaining on his contract but almost no hope of playing at the Emirates.

Bournemouth: Harry Arter
Eight years after signing for Bournemouth in League One, it seems Arter is ready for a fresh start. The 28-year-old, who was linked with West Ham last summer, drifted between the bench and the stands during the second half of a season during which he did not play a Premier League minute after New Year’s Day. The signing of David Brooks from Sheffield United does nothing for Arter’s hopes of regaining his place at Bournemouth. Fulham have been linked and a move seems best for the sake of his Republic of Ireland prospects.

Brighton: Oliver Norwood
The midfielder spent last season on loan at Fulham but with the Cottagers having spluffed a record amount on Jean-Michael Seri, it seems a return to Craven Cottage is unlikely. Norwood’s prospects look even more bleak with his parent club, despite a creditable pre-season so far. Hull have apparently had a loan bid for him and Jiri Skalak rebuffed but it seems likely the Tigers or another Championship club will give the former Manchester United youngster a regular game this season.

Burnley: Jon Walters
The 34-year-old striker only moved to Turf Moor last summer but managed just 36 minutes of Premier League football due to injuries. Sean Dyche is said to be keen to bring another striker in before the deadline and Walters has been honest in his desire to move on again in the hope of extending his Republic of Ireland career.

Cardiff: Lee Tomlin
The attacking midfielder joined the Bluebirds last summer but while Neil Warnock’s squad were celebrating promotion, Tomlin was on loan at Nottingham Forest. A return to the City Ground has been mooted but his wages could scupper a permanent deal. Warnock expects interest in Tomlin, as well as Anthony Pilkington and Omar Bogle to increase.

Chelsea: Danny Drinkwater
The £35million midfielder barely played last season so his chances of featuring this term after new boss Maurizio Sarri brought Jorginho with him from Napoli appear even more remote. West Ham and Crystal Palace could offer the chance to stay in London while Leicester are apparently willing to offer Chelsea £20million of their money back for the 28-year-old.

Crystal Palace: Wilfried Zaha
Does Zaha want to leave? We don’t know. There is plenty of speculation that he has turned down a new £125,000-a-week deal to stay with his boyhood club but the winger, even if he would prefer to move on, is never likely to agitate for a move away from the club where he is adored. But nor could anyone blame Zaha for wanting another crack at the big time. Arsenal, Chelsea and Tottenham have all been sniffing and it seems highly unlikely that Palace will get to the deadline without having to fend off some serious interest.

Everton: Ashley Williams
There is a plenty of fat to trim from Marco Silva’s squad, with Sandro Ramirez and Kevin Mirallas both searching for a move away. Williams might also be joining them. Silva is said to be keen to recruit a centre-back, with reports on Tuesday suggesting the Toffees will pay £30million for Marcos Rojo. That means Silva is likely to shed one of his current central defenders. Skipper Phil Jagielka is arguably still the best centre-back at the club; Michael Keane will get another chance largely because no one else will pay for him; Mason Holgate is coming through the ranks; meaning Williams is the odd man out.

Fulham: Rui Fonte
The Portuguese forward saw his playing time cut by Aleksandar Mitrovic’s arrival last winter and now the Serbia striker has signed permanently, Fonte’s prospects appear even more bleak. Fonte only moved to Craven Cottage from Braga last year and Fulham’s outlay coupled with the fact he still has two years remaining on his contract means the 28-year-old might be tough to shift.

Huddersfield: Michael Hefele
Played a big role in getting Huddersfield to where they are but not quite up to standard to help keep them there. A queue of Championship clubs were interested in a loan deal for the German defender in January and Aston Villa are said to be keen on the centre-half with a year remaining on his current deal.

Leicester: Islam Slimani
The £28million striker was loaned out for the second half of last season to Newcastle where he did nothing to suggest he could force his way into the Foxes reckoning this season. Leicester will reportedly accept £18million for the 30-year-old, though there is hardly a queue of clubs willing to pay that for a player they could wait and get on loan.

Liverpool: Danny Ings
One of two strikers named Daniel who were looking to leave Liverpool, Ings is searching for the right opportunity to restart a career that was so cruelly hampered by injury while Sturridge has had a change of heart. Despite having made only 14 Premier League appearances over the last three seasons, it seems Ings isn’t short of possible options, with Crystal Palace, Leicester, Newcastle and Southampton all looking to do a deal with Liverpool.

Manchester City: Joe Hart
Man City were prepared to let the former England No.1 leave for £5million but even that price was proving prohibitive to getting Hart off the books. So, apparently, City are willing to allow the 30-year-old to leave for nothing. But still there’s no queue forming outside the Etihad. Another loan doesn’t appeal to Hart: “I did what I did in the previous two seasons because I needed to play to be involved in the World Cup – and look where that got me.” That’s because you weren’t very good, fella.

Manchester United: Anthony Martial
The French winger might be desperate to escape the clutches of Jose Mourinho but, quite rightly, United aren’t prepared to let Martial leave on his terms. The 22-year-old clearly doesn’t have the attitude Mourinho demands, and under a manager who might be more willing to indulge his moods, perhaps Martial might achieve the potential he clearly has. But he needs to give himself a shake, wherever he finds himself come the deadline.

Newcastle: Freddie Woodman
The vast majority of the talk around Newcastle involves new recruits but it cannot be forgotten before the deadline that Rafael Benitez’s squad is currently overloaded with goalkeepers. Martin Dubravka has made his move permanent after claiming the no.1 spot during the second half of last season, while Karl Darlow and Rob Elliot are also ready with the gloves. Woodman, aged 21, needs game time and he won’t get it at St James’ Park.

Southampton: Fraser Forster
The giant keeper has gone from England’s No.3 to Southampton’s third choice with the £10million arrival of Angus Gunn so his time at St Mary’s is almost certainly up. But Forster is one of the Saints’ highest earners after signing a new deal last summer so shifting him off the books permanently could be tricky. A loan move seems most likely, with Burnley said to be interested.

Tottenham: Vincent Janssen
“The situation for Vincent is clear,” said Mauricio Pochettino. Not wanted at Spurs but not wanted at many other clubs either, it would seem. Fenerbahce have apparently turned their attention to Islam Slimani instead. Janssen’s agent needs to spend the next week or so on the phone. Before everyone forgets that he exists.

Watford: Younes Kaboul
Injuries restricted the centre-back to just two Premier League appearances last season and he returns to fitness to find the Hornets now have a wealth of defensive options. The 32-year-old has only a year remaining on his deal so the time is now if Watford want to recoup a transfer fee, though the former Spurs and Sunderland stopper’s inactivity means suitors are thin on the ground.

West Ham: Sam Byram
The former Leeds defender looks most likely to be heading back to the Championship after the Hammers signed Ryan Fredericks from Fulham to compete with Pablo Zabaleta, who still has a year remaining on his contract. Nottingham Forest seem extremely keen and a season away from the London Stadium could enhance his West Ham prospects.

Wolves: John Ruddy
Unless the former England keeper fancies being back-up (there’s a theme developing here) then Ruddy needs to look elsewhere after the arrival of Portugal international Rui Patricio. “Just because they’ve brought a goalkeeper in doesn’t mean it’s the end of me,” he said earlier this month. But it probably is.