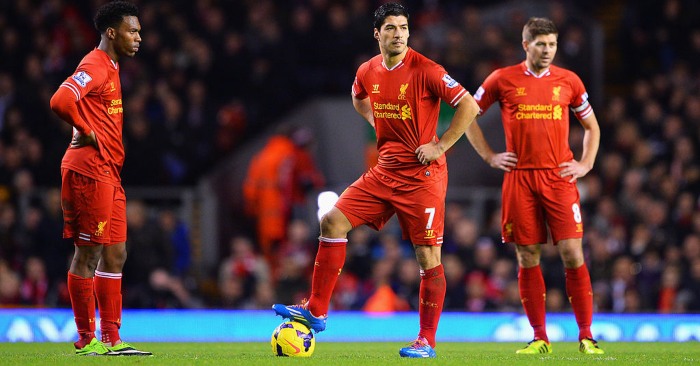 Notice that we say ‘trios’ and not ‘front threes’; not all these trios would have played in a traditional front three. Gary Neville argued that the Ronaldo/Tevez/Rooney triumvirate was the best in Premier League history – ahead of Liverpool’s current front three – but the truth is that four other trios have scored more…

5=) 17/18: Liverpool – Salah, Firmino, Mane (57)
What is more astonishing? That these ridiculous goalscoring exploits only reaped fourth place for Liverpool (clue: Dejan Lovren played 29 Premier League games that season)? Or that they pretty much repeated the trick a season later with 56 Premier League goals? This was the season Salah scored an astonishing 32 goals in the top flight – a record for a 38-game season – while Roberto Firmino (15) outscored Sadio Mane (10). Something special was starting to come together.

5= 07/08: Man United – Ronaldo, Tevez, Rooney (57)
The pace. The power. The precision. Aesthetically speaking, this was an astonishing trio. Sir Alex Ferguson enabled this trigonometry by selling Ruud van Nistelrooy, a phenomenal goalscorer but a man who could never operate in this kind of fluid set-up. This was by far the best goalscoring trio in Europe that year, with Ronaldo logging an astonishing 42-goal season in all competitions. “Tevez for a year with Ronaldo and Rooney was just breathtaking, it was out of this world. Not just because of the actual quality of the players, but there was a real selfish, horrible, nasty determination to those three,” said an understandably erect Neville.

4) 16/17: Tottenham – Kane, Alli, Son (61)
This is the season Tottenham contrived to come second despite scoring more and conceding fewer goals than Chelsea, with Harry Kane hitting 29 goals and Dele Alli (18) winning the PFA Young Player of the Year as a No. 10. That all three remain at the club three years later – and that a poor Spurs are on course for a mid-table finish – tells a sad tale of a golden era that actually produced no silver. Oh what might have been…

3) 93/94: Newcastle – Cole, Beardsley, Lee (62)
This trio had the advantage of four extra games but this was still pretty astonishing from a Newcastle side that finished 15 points behind Manchester United but outscored than 82 to 80. And 55 of those 82 goals were scored by Andy Cole (34) and Peter Beardsley (21) with Rob Lee chipping in seven from midfield. No fewer than six St James’ Park matches saw four Newcastle goals or more. No wonder they began to answer to the name of The Entertainers. That seems an awful long time ago now.

55 – Andrew Cole (34) and Peter Beardsley (21) scored 55 Premier League goals between them in the 1993-94 campaign; the highest scoring partnership in a single PL season. Prolific. #OptaPLSeasons pic.twitter.com/7qDyYmlDIu

2) 09/10: Chelsea – Drogba, Lampard, Malouda (63)
A team too often forgotten when discussing the great attacking sides of the Premier League era, Carlo Ancelotti led the Blues to an astonishing 103-goal Premier League season which featured four players on double figures: Didier Drogba (29), Frank Lampard (22), Florent Malouda (12) and Nicolas Anelka (11). Drogba was – for two campaigns at least – possibly the most complete striker of the Premier League era while Lampard enjoyed one of those seasons when the concept of missing the target was an alien one. Together they were powerful, magnificent and incredibly bloody annoying.

1) 13/14: Liverpool – Suarez, Sturridge, Gerrard (65)
In the end, they f***ed it. But that was a phenomenal attacking Liverpool side, with Luis Suarez (31), Daniel Sturridge (21), Raheem Sterling (7) and Philippe Coutinho (5) forming a fluid front four, with Steven Gerrard (13) contributing from the penalty spot and beyond. They were the small matter of a defence and a goalkeeper away from being a truly great side. Astonishing fact: Jon Flanagan played 16 Premier League games at left-back that season, which pretty much explains it all.

Best Liverpool team of the decade based on individual seasons? For me: