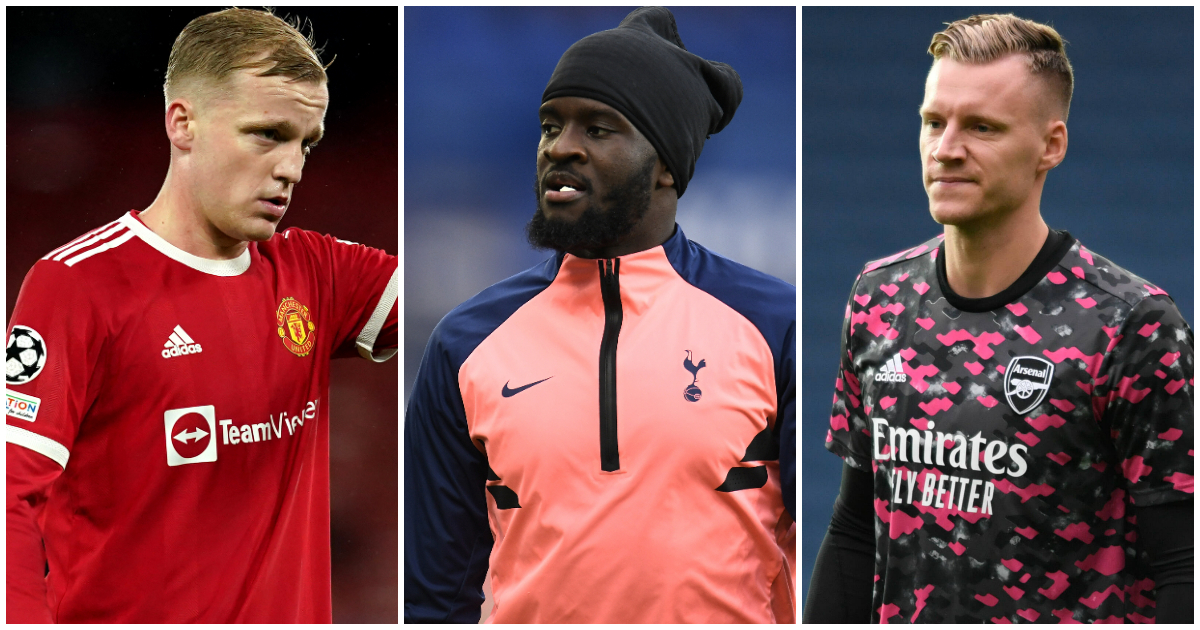 Record signings, bit-part players, promising youngsters… here are 20 players with only six days to get themselves away from their current clubs…

Arsenal – Bernd Leno
With Leno having lost the gloves to undisputed No.1 Aaron Ramsdale, the German has no intention of bench-warming for much longer, especially with his Germany place to consider in a World Cup year. Arsenal have already sourced his replacement and are working on a deal for New England Revolution stopper Matt Turner. Leno could go to Newcastle, who have reportedly been offered a loan deal with the obligation to buy, but the keeper is apparently reluctant to commit to the Toon.

Aston Villa – Trezeguet
The winger is currently away at AFCON but Steven Gerrard isn’t in a hurry to get him back having offered him on 10 minutes of Premier League action this term. “He could find getting game time here challenging,” admitted Gerrard after he signed Philippe Coutinho. “So we’ll be respectful to him and we’ll see what lands from now until the end of the season.” We kind of forgot he existed.

Brighton – Kjell Scherpen
The giant keeper, signed in the summer from Ajax, made his first-team debut in the FA Cup win at West Brom but that only whetted the Dutchman’s appetite for action. “I am now looking for opportunities to get out and play for this last six months of the season,” he said after his first appearance for the Seagulls. Over a fortnight later, he’s still looking.

Brentford – Tariq Fosu
Now that Joel Valencia has joined Agrupacion Deportivo Alcorcon (Spanish second division, apparently) for the rest of the season, it’s Fosu’s turn to find a new club. Thomas Frank, taking time out from his p*ssing and moaning, said last week that the Bees will assess Fosu’s situation now he’s fit after a hamstring injury, before which he played only in the Carabao Cup.

Burnley – Dale Stephens
If Burnley can afford to let anyone go – they probably can’t – then the former Brighton midfielder is probably towards the front of the exit queue since he’s played only once in the Premier League (half an hour in the defeat at Man Utd between Christmas and New Year) and his only start came in the FA Cup when Burnley were embarrassed by Huddersfield.

Chelsea – Ross Barkley
There appeared a glimmer of hope for Barkley before Christmas when Thomas Tuchel offered the midfielder minutes in four games out of five and a start against Burnley. But one 25-minute cameo in 13 games since suggests Tuchel wasn’t much fussed with what he saw from the ex-England international. Barkley was linked with a return to Everton, and there will be other managers who fancy themselves to get the 28-year-old back to something approaching his best.

Crystal Palace – Scott Banks
Now that Jean-Philippe Mateta seems to have conjured up some form just as Palace were happy to let him go, the next cab off the rank could be Banks, a Scotland Under-21 forward described by Patrick Vieira as “a really smart kid” who needs some senior experience beyond pre-season run-outs.

Everton – Cenk Tosun
The Turkey striker is out of contract at the end of the season so it’d be wise to put himself in the shop window somewhere before free agency rolls around. Twenty-seven million quid…

Leeds – No-one
All season, Leeds have been a knock or a sprain away from issuing a recall for Eddie Gray to play alongside his 15-year-old nephew Archie so to contemplate allowing any able-bodied footballer to leave Elland Road would be daft. But, Leeds…

Leicester – Nampalys Mendy
Brendan Rodgers said on Sunday that he couldn’t afford to lose any more players, but the Foxes have managed just fine without Mendy, who wasn’t named in the Premier League or European squads. The midfielder, presumably, is hoping AFCON might act as a shop window since little has changed since he said this in November: “I would really love to leave Leicester, It is normal and logical.”

Liverpool – Nat Phillips
The Bolton Baresi has barely had a look in at Anfield this season and Liverpool can make a few quid from moving on the 24-year-old. West Ham and Watford are both sniffing around Phillips, while PSV Eindhoven have also been linked, but the Dutch side can only afford a loan deal. A prediction: Phllips will spend his deadline day hurtling towards east London to drop his pants and cough for West Ham’s doctor.

Manchester City – James McAtee
Pep Guardiola won’t be looking to shift any of his senior squad, while the City boss also likes to keep his young players at close quarters, rather than risk their development in the hands of a lesser coach. Liam Delap and Cole Palmer will likely remain around the first-team squad, but midfielder McAtee, who has been likened to David Silva (no pressure, kid), could follow Tommy Doyle and Taylor Harwood-Bellis out of the City exit for a stint of senior football elsewhere. Apparently, Southampton have been sniffing around McAtee, who has attracted plenty of attention from the Championship.

Manchester United – Donny van de Beek
For Jesse Lingard there is a light at the end of the tunnel in the form of free agency in the summer. For Van de Beek, the exile will go on unless he can get away, even on loan for the rest of the season. Even playing at Newcastle must be better than picking splinters on Ralf Rangnick’s bench.

Newcastle – Dwight Gayle
Eddie Howe clearly doesn’t fancy Gayle since he’s given him just seven minutes of Premier League action since taking over at St James’ Park. There will be a few Championship clubs looking at taking a punt on the 32-year-old.

Norwich – Todd Cantwell
The midfielder can’t get in Norwich’s team at the moment – Dean Smith attributed his absence in the win over Watford to ‘a selection thing’ – but the Canaries could still make £15-20million by selling the 23-year-old, with Newcastle and one other unnamed Premier League club said to be interested.

Southampton – Harry Lewis
The Saints stopper must surely have taken the hint when Ralph Hasenhuttl opted to sign 427-year-old Willy Caballero when his goalkeeping options were stretched, rather than allow Lewis anywhere near his net. Lewis, 24, has not played a first-team game since a loan spell at Dundee United in 2018.

Tottenham – Tanguy Ndombele
Dele Alli and Giovani Lo Celso are also up for grabs having failed to impress Antonio Conte, but Ndombele clearly needs a fresh start after five managers all reached similar conclusions over the club’s record signing. Maybe a loan at PSG will enhance his long-term prospects at Spurs but it seems both parties need a clean break.

Watford – Danny Rose
Whatever happens between now and next week, it appears unlikely that the former England left-back will be named in Watford’s Premier League squad, and it’s hard to tell which Rose would prefer: a move to play football elsewhere, or six months on his arse picking up his salary.

West Ham – Armstrong Okoflex
The 19-year-old winger has been earning rave reviews in the Under-23s – 11 goals in 15 games – after joining on a free from Celtic last summer and certainly looks ready for some senior fun beyond a few bench appearances of late. But that’s not likely while the Hammers remain in with a shout of the top four. So half a season on loan in the Football League would seem to make sense.

Wolves – Fabio Silva
Bruno Lage needs to think about the long term and send Silva out on loan for six months. The teenager made his first Premier League start of the season on Saturday – and his lack of action showed. An impressive display at Sheffield United in the FA Cup prompted hopes that the striker might be ready to kick on but Silva is likely to spend the rest of the season on the bench, which won’t aid his development. If Wolves are to see any return from their £35million investment, Silva needs to play.