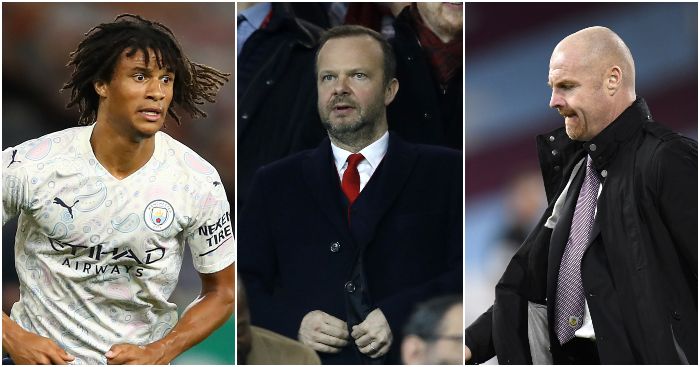 It was July 5 when Borussia Dortmund’s decision to impose a deadline on the sale of Jadon Sancho first became public knowledge. Manchester United had, by all accounts, agreed personal terms with the player, giving them five weeks to choose between two options: decide on the structure of a fee the German club had made explicitly clear they would not deviate from; or move on.

Their response was equal parts arrogance and ineptitude. For a club that has long lamented the fact other teams try to take advantage of them in the transfer market, they provided a compelling, months-long case as to why.

This is a side that entered this summer needing a centre-half, a holding midfielder and a right-winger, who had the benefit of seeing those deficiencies thoroughly exposed at the start of a dreadful season with time remaining to address them, who embarked on a deadline day panic akin to the sort they themselves induced in Arsene Wenger almost a decade ago, who still managed to stumble out of the transfer window with none of their problem positions solved, while providing the manager enough rope to finish the job.

Ole Gunnar Solskjaer has yet to even start the only player Manchester United had signed before Monday. Donny van de Beek was a great purchase, the only member of this squad who had enjoyed a full pre-season – a Champions League semi-finalist and Europa League runner-up. But he has done little more than adorn the bench at a time his new club desperately needs an injection of inspiration and something different.

It is not difficult to see the reasoning behind his signing, nor that of Edinson Cavani. He is an improvement on Odion Ighalo and can aid the development of the club’s young forwards. But he was released in July; if he was ever a serious Manchester United target, why the three-month wait to sign him?

Amad Diallo, Facundo Pellistri and Alex Telles similarly have their uses in this squad but one will join in January, another has been supposedly tracked for a year on the recommendation of sacked former Penarol manager Diego Forlan and still bought only mere hours before the deadline, the other excels going forward but less so in defence, and none genuinely improve the starting XI enough to make their arrivals worthwhile in isolation.

None of those five signings would have been within Solskjaer’s top 20 or so ideal targets this transfer window. If they had it would not have taken so long to get them, nor required an embarrassing result at home to a direct rival to force interest to the surface. But there is a blatant disconnect between what the manager says in public and what the club does in private. As understandable as some of that is – it is often necessary to keep face and retain a sense of unity – it jars with what is happening at every other team around them.

Arsenal, Aston Villa, Chelsea, Everton, Leeds, Leicester, Sheffield United, Tottenham: clubs at opposite ends of the Premier League spectrum but each of whom have displayed trust in their manager by emphatically delivering what has been requested. United have shown the opposite. They would have signed Sancho if they had believed in Solskjaer. They would have gift-wrapped the one player the world knew he wanted. They would have found the money, the will and the way to swallow their pride and meet Dortmund’s ultimatum instead of using it as a convenient smokescreen to stumble through yet another aimless, wasted transfer window.

This transfer window has amounted to little more than a vote of no confidence in the man in charge.

Now that is how to secure a podium finish on this list. Seven years in this job and the entire concept of a transfer window still seems to baffle him.

He deserves better. Sean Dyche has now been a victim of his own overachievement twice in as many years at Burnley. Taking them to 7th was deemed worthy of just three signings in Ben Gibson, Joe Hart and Matej Vydra in 2018; that makes the 2020 outlay of £1m on Dale Stephens after finishing 10th seem positively lavish in comparison.

For a manager that spoke in July of “trying to rinse every drop out of every situation we can”, Dyche himself knows Burnley would be taking the piss if there was anything left to come out. The hierarchy are resting on their laurels and banking on another minor miracle to stay in the Premier League.

He has discussed the “challenge” of coaching under such circumstances before but where once his tone implied a certain relish, enjoyment and appreciation of the obstacles placed ahead of him, there is only apprehension, weariness, lethargy. Every magician has a signature act but ask them to keep performing it with a microscope in their face and props that need replacing, and the effect will soon wear off as resentment grows deeper and deeper.

Had Dyche been imperceptibly worse at his job, Burnley would have offered more backing in the market. They signed Charlie Taylor, Jonathan Walters, Jack Cork, Phil Bardsley, Chris Wood and Nahki Wells after coming 16th in 2017, and Erik Pieters and Jay Rodriguez following a finish of 15th in 2019. As it is, they are risking losing the most important individual in their recent history through inaction: Dyche could walk tomorrow and no-one could blame him.

While reunited with the four loanees who proved so crucial to West Brom’s promotion season, Slaven Bilic surely cannot be content with a transfer window that has almost consigned the Baggies to an immediate return from whence they came. Matheus Pereira and Grady Diangana are sensational players and Filip Krovinovic, along with Callum Robinson, will and already have had their moments. It just won’t be enough.

A defence that looked nowhere near the requisite standard in August has had a centre-half from Wigan and a 36-year-old free transfer added to it. Cedric Kipre and Branislav Ivanovic are not ingredients included in any realistic recipe for survival.

The paradoxical truth is that West Brom do not look good enough in any starting position other than the wide forwards, who were signed permanently at such great expense that no other area of the squad could be improved. Pereira and Diangana, as exciting as they are, ripped £26m out of an already modest budget and proved the folly of relying so heavily on players owned by other clubs.

It is hindsight to suggest the money would have been spent better elsewhere and spread more evenly. It is honest to point out that it probably won’t have mattered and the result will be all the same.

No club started the summer in a stronger negotiating position. Manchester City were effectively safeguarded against the stark financial realities faced by most of their contemporaries, ended the Premier League season with five consecutive wins at an aggregate score of 21-1 and were simultaneously far enough away from Liverpool all campaign to induce a concentrated spend on specific targets that should have been planned for half a year at the very least.

Ferran Torres and Nathan Ake are good players independently but were never enough to bridge that gap in quality to the champions. Ruben Dias only joined for a stratospheric sum in the aftermath of a chastening home defeat to Leicester, and even then as third choice behind Kalidou Koulibaly and Jules Kounde.

It speaks to a lack of coherent planning for which there is no excuse. Lionel Messi was a convenient distraction for a week or so while obvious issues have been highlighted and ignored in these opening weeks.

This is essentially a smaller scale example of the disaster across the city. Guardiola needed a left-back, another midfielder and a striker this summer and ends with none. Benjamin Mendy is not adequate for this role and the jury remains out on Rodri and Gabriel Jesus, at least in this current system. Fernandinho and Sergio Aguero are sublime players but will soon need replacing at 35 and 32 respectively.

The lack of proactivity is particularly baffling from a club that stared at a festering Vincent Kompany-shaped wound for more than 12 months before deciding it ought to be treated. Lessons are not being learned at the Etihad.

It does not feel as though signing more players on loan than permanently is particularly conducive to stability, but then this is a club with a director of football who felt it necessary to issue a public condemnation of his centre-halves for conceding three goals to an Aston Villa side that put seven past the reigning champions the next week.

Tony Khan belatedly delivered on his “promise” of “players in” but it remains to be seen whether that leads to “better efforts”. A deadline day scramble has left them with undeniable upgrades on Denis Odoi and Tim Ream in Joachim Andersen and Tosin Adarabioyo. Ruben Loftus-Cheek is an odd cherry on a pretty sh*tty cake.

They all represent at least slight improvements in key areas – as does Ademola Lookman – but each were completed unnecessarily late and meant other issues will go unattended. Aleksandar Mitrovic could collapse under the weight of the goalscoring burden; Alphonse Areola seems a strange barrier to place in the way of Marek Rodak after a fine season; their depth is almost entirely non-existent outside of defensive midfield.

Their work has guaranteed one thing: Derby’s points record will remain intact. By how much is uncertain because Fulham still seem doomed.

The danger in having the transfer window close after the start of the season is that results and performances can obscure the perception of the business a club conducts. West Ham have had a phenomenal week on the pitch that ought not distract entirely from the problems off it.

Keeping Declan Rice is an obvious boon but it might have come at the expense of investment elsewhere in the squad. Their only real new signing was right-back Vladimir Coufal; Tomas Soucek joining on a permanent transfer was little more than necessary admin.

The gaps remain at centre-half and central midfield but the opposite problem also lingers: a bloated selection of more attacking players. Manuel Lanzini, Felipe Anderson and Andriy Yarmolenko could not be shifted and have no obvious part to play in the immediate or long-term future.

David Moyes’ penchant for Football League players might still prove useful ahead of the October 16 deadline for domestic deals. If not, the recent progress risks being wasted.

They probably needed another striker capable of doing the goals a bit more. And that is why I am paid the big bucks.