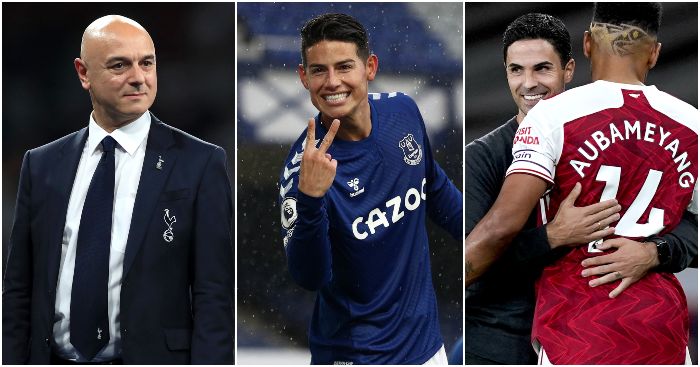 This way for the transfer window losers…

Aston Villa had many of the composite parts of a solid Premier League team last season. The four players handed the most minutes by Dean Smith were Jack Grealish, Tyrone Mings, Douglas Luiz and John McGinn: the sort of spine many of their rivals would envy.

The problems occurred when mining a little deeper into a supporting cast that did not deserve to share screen time with the leading actors. Anwar El Ghazi played 34 games. Frederic Guilbert and Ahmed Elmohamady engaged in an incredibly underwhelming battle to start at right-back. Four goalkeepers were used. Wesley Moraes and Mbwana Samatta posed more questions than answers. Grealish created 53 more chances than his closest teammate and completed 20 more dribbles.

The issues were obvious but no team has been more ruthless in identifying and rectifying theirs. Emiliano Martinez (28) brings the security and comfort Tom Heaton, Pepe Reina and Orjan Nyland could not. Matty Cash (23) is a laughably good upgrade in his position. Ross Barkley (26) will shoulder much of the creative burden. Ollie Watkins (24) already has more than half the Premier League goals any Villa centre-forward managed in 2019/20, with Bertrand Traore (25) sure to provide stern competition.

Grealish remains their jewel but the crown has rarely glistened quite so much.

More than most teams before them – and it should be said that billionaire owners do help – Villa have sought to build on survival rather than resting on their laurels and hoping the bare minimum will be enough again. Suso has gone as sporting director, with Johan Lange in his place. They spent £130.25m on 12 signings in the last summer transfer window and £78m on four this. The average spend per player has almost doubled.

“Quality rather than quantity” was the phrase Dean Smith used last week and it is the perfect summation of Villa’s business. No club had a better transfer window. The proof is already in a quite delectable pudding.

Everton run them an incredibly close second, a team completely transformed over the course of three days in September.

Allan arrived on the 5th, James Rodriguez on the 7th and Abdoulaye Doucoure on the 8th to instantly reshape a previously stodgy, uninventive midfield that lacked energy into a well-rounded engine room with equal levels of flair and industry.

Carlo Ancelotti could have asked for little more as Everton completed that rare feat of delivering a manager’s first-choice targets before the start of the Premier League season. A handful of clubs were able to do one or the other but the Toffees were one of scant few to accomplish both.

A breathtaking opening month of the season even allowed them the opportunity to be patient with their options at centre-half before bringing in Ben Godfrey at around half of his February valuation. There is perhaps a case to be made that Dominic Calvert-Lewin is propping up the centre-forward position entirely alone but a glance at Tottenham shows it is not so easy to sign a back-up for a generational English striker.

Everton can and have been accused of many things over the past few years but failing to support their managers in the transfer market is not one of them. The opposite is true: they have backed coaches almost too much. Ronald Koeman and Marco Silva both had £200m plunged into their grand visions while Sam Allardyce was given a lavish budget in a panicky 2018 winter. Those three spent more on the individual signings of Yannick Bolasie, Davy Klaassen, Cenk Tosun, Jean-Philippe Gbamin, Moise Kean and Alex Iwobi than Ancelotti has been afforded on any one player, yet the Italian will be happier adding necessary coats of paint than throwing expensive shit at the wall in the forlorn hope that something eventually sticks.

His pulling power has helped but this has been an altogether more focused, studious and diligent transfer window than usual at Goodison Park. There is finally a connect between what the coach, the board, the players and the fans want. All it required was for Everton to appoint a manager they felt indebted to, one to show them how a proper club should operate, who they are probably petrified to lose.

“I have a very clear plan and the specificity of the players, the positions and squad balance that we need to compete with the rest of the top teams in the country,” said Mikel Arteta in July. “We cannot be a team that has to sell his best player to try to bring in and improve our squad, that’s for sure.”

Those words resonated but actions always speak louder. Arsenal kept Pierre-Emerick Aubameyang, essentially paid for the signing of the excellent Gabriel Magalhaes with the sale of someone who had been their back-up goalkeeper for all but two months of a ten-year spell in north London, and accepted Willian’s three or four bad games in exchange for every brilliant one.

What was a great transfer window became an excellent one once Arteta sent out his late Partey invitations. Central midfield was the last position Arsenal felt genuinely short of quality options in and for the club to make its fourth most expensive signing ever to correct that is a remarkable statement of intent.

Most of all, it has outlined the faith Arteta has earned in such a short space of time. The mess he inherited at Arsenal included a transfer committee that involved Raul Sanllehi, Francis Cagigao, Huss Fahmy, Edu and the manager: cooks with apparently equal amount of sway that led to a confused broth. That has been streamlined – regrettably so in the case of scouting redundancies – culminating in Arteta’s promotion last month from head coach to manager. His claim that everyone at the club is finally “on the same page” is no vague, hollow platitude but a sign they are headed in the right direction since long before Arsene Wenger left.

Even ignoring the concept of paying fees in instalments, otherwise known as the method used by pretty much every club across the world in most deals, Liverpool have had an excellent transfer window. The temptation might have been to stick after the success of relative inaction in the transfer window last summer, but the squad needed a slight refresh for the challenges ahead.

Thiago, Diogo Jota and Kostas Tsimikas provide competition in key areas yet Liverpool once again excelled when it came to sales. Dejan Lovren and Ovie Ejaria generated around £15m between them; Rhian Brewster and Ki-Jana Hoever were moved on for more than twice that amount despite neither having made a single top-flight league appearance in their larval careers.

The Liverpool premium is real, and no longer an affliction isolated to Bournemouth. Michael Edwards puts most of his contemporaries to shame.

But no Premier League club executive will consider themselves to have had a more successful few months than Daniel Levy. The release of an ostentatious documentary and the arrivals of an Olympic, world and European champion to accompany a returning prodigal son who won every trophy possible at the biggest club in the sport has breathed elite life into a team who have so often seemed to be winging it on this stage, off the pitch if not on it.

Few can blame Levy for finally parlaying Tottenham’s modern prominence into a more recognisable brand and global platform. Alex Morgan, Gareth Bale and Jose Mourinho transcend the game as personalities. But they each still have plenty to offer their respective teams outside of social media engagement and superstar status. That is an important but often difficult balance and Levy, who tends to favour the latter, has struck it well.

This was also his first summer transfer window since 2015 in which he made no deadline day signings, aside from the entirely barren 2018. Well done for handing your coursework in early for once.

The four clubs that finished immediately below the Champions League qualification places have taken that setback in their collective stride. Each have completed the sort of remarkably sensible business that points towards an overarching strategy led by an intelligent manager and scouting team, guided by results but never driven by them entirely.

That is to say that Leicester would have pursued Timothy Castagne, Cengiz Under and Wesley Fofana regardless of whichever competition they were in; that Tottenham’s sensible summer never depended on reaching the Europa League; that Wolves’ meticulous and logical squad churn was inevitable; that Arsenal had specific targets in mind for months rather than weeks and delivered on almost all of them.

Between Brendan Rodgers, Mourinho, Nuno Espirito Santo and Mikel Arteta, the closest challengers to last season’s top four all have managers with a clear, realistic and pragmatic vision of what they want, and structures around them to facilitate it. At least two of the teams that qualified for the Champions League cannot say the same. Throw in Ancelotti at Everton and, at this rate, Smith at Aston Villa, and the VIP party at Europe’s top table seems sure to be crashed.

There is something to be said for settling on one transfer target and obdurately pursuing them until the contract is signed. Liverpool made quite the habit of identifying specific players and refusing to even contemplate alternatives, waiting for Virgil van Dijk to become available and hardly blinking at the eye-watering cost of bringing Alisson to Anfield.

But Marcelo Bielsa is different. His system is designed with transfer flexibility in mind, never dependent on any one player coming onto a crowded market. While Pep Guardiola demands the very best to implement his style properly, Leeds have a coach capable of adjusting his requirements if necessary.

Watkins was their primary striker target at a time Rodrigo was deemed unrealistic. Ben White and Josko Gvardiol were the centre-halves they patently wanted but Robin Koch and Diego Llorente were fine choices to have in reserve. Raphinha was only brought in on deadline day after numerous other avenues had been pursued and abandoned.

It is not a case of Leeds settling for second best, more an example of a manager not too stubborn to see past the end of his spectacles. He and they have only been in the Premier League for four matches but both have conducted themselves like top-flight mainstays this summer.

It remains to be seen if any of it actually works but it was bloody fun while it lasted. Chelsea are an eternal reminder that fantasy tends to be better than reality.

Not perfect, but still very practical and manager-proof, which is particularly handy when said incumbent is probably one bad run of form away from being sacked.

The man made by far his most expensive signing ever at the age of 73 and that really is beautiful. Eberechi Eze, Michy Batshuayi and Nathan Ferguson are solid additions, particularly in light of Wilfried Zaha staying. For a team that has not finished higher than 10th nor lower than 15th in seven consecutive Premier League seasons, this was an ideal consolidation of their stability.

Getting £10.5m for Anthony Knockaert is tantamount to witchcraft.

Let that be a reminder as to why swap deals barely ever happen.