Home Arsenal One per Premier League club: The ones that got away 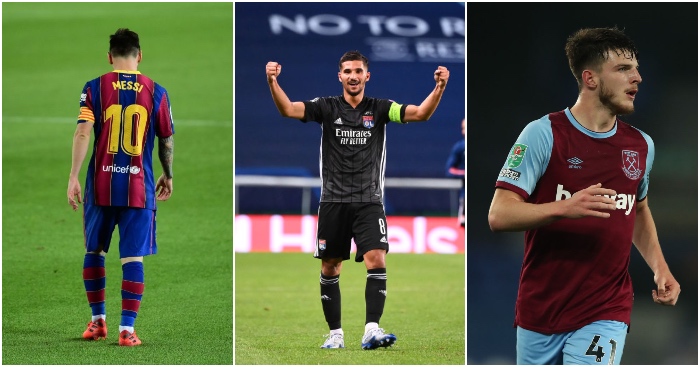 There were winners and losers; sensible gambles, splurges and missed deadlines. It was another transfer window. But what about the nearly and not-so-nearly deals? We’ve picked the players who were linked but never made a move, one per Premier League club.

Atletico Madrid were ‘furious’ with Arsenal as the Gunners waited until 32 minutes before the transfer window shut to activate Thomas Partey’s release clause. They were marginally less pissed off than everyone else quickly became with the puns…

The Ghanaian is far more than a midfield enforcer; he had the best dribble success rate in Europe’s top five leagues last season. But Arsenal may come to regret the absence of a playmaker to unlock a deep defence. The Arsenal Partey may be lacking in cig-Aouars (sorry).

Villa were reportedly in ‘advanced negotiations’ with the the left winger on Sunday morning, but – for some reason – felt they didn’t need him by Sunday night. The Kosovo international was close to sealing a move to Bayer Leverkusen from Werder Bremen on Monday, but the deal fell through at the last minute.

Dean Smith said Villa “can’t stockpile players”, but wide areas will remain a concern despite the signing of Bertrand Traore. They can’t play Liverpool every week.

Tariq Lamptey on the right and Ryan Sessegnon on the left would have been pretty sweet. But the Tottenham full-back opted to join Hoffenheim on loan instead, where he is doing his best to adhere to social distancing guidelines, while pandering to his new club’s need for a classic announcement photo…

The Sun’s headline ‘HARRY SQUATTER’ is a little unfair – he’s not turned up with a shire horse and started farming the potatoes at Melwood – but the idea isn’t miles wide of the mark: do Liverpool really want him?

Burnley however, needed more. They signed Dale Stephens for £1million and Anthony Gomez Mancini on loan from Angers. But Sean Dyche – who may now have outgrown Burnley – said after Saturday’s defeat to Newcastle: “We’ve got the most stretched squad I’ve ever had since I’ve been here.”

Rice has been brilliant for West Ham so far this season, both at centre-back and at the base of midfield. Frank Lampard reportedly sees Rice as a future captain, a leader, perhaps even a legend. If you squint really hard he even looks a bit like John Terry.

This photo of John Terry and Declan Rice makes me so happy. 💙 #CFC pic.twitter.com/W5iDd57c3v

Thiago Silva was impressive on Saturday after he succumbed to the Chelsea defender hoodoo on his Premier League debut against West Brom. He may be a solution in the short term, but Rice is the long-term future they will continue to seek.

Theo Walcott’s a nice guy; we like nice guys.

“I will probably cry, I bet, when I first play, and it means so much,” Walcott said, after it was announced he would be returning to boyhood club Southampton on loan. “All the people that made it happen, I can’t thank them enough. Honestly, I’m so pleased.”

Crystal Palace’s interest – if there was any truth to it – seemed strange anyway. With Eberechi Eze, Wilfried Zaha and Andros Townsend, Theo would probably have taken up his customary position on the bench. Which of course may also be the case at Southampton, but at least it’s the bench he first emerged from; that’s also nice.

The 20-year-old centre-back moved on loan to Benfica from Barcelona in the end, while Everton instead plumped for Ben Godfrey from Norwich. What a bloody brilliant window. Everton backed their world-class manager who has brought in a mixture of world-class players and emerging talent: that’s how you do it.

Can’t help but feel the PSV Eindhoven centre-back dodged a bullet here. It’s Tosin Adarabioyo and Joachim Anderson who will instead be peppered with Premier League gunfire.

They didn’t get anywhere near as close as last time, but there was the odd rumour of James not only being pictured holding a Leeds shirt, but actually wearing it. They instead landed Raphinha.

The one plus for Burnley in this window is that they didn’t lose any of their star players. Nick Pope, Dwight McNeil and James Tarkowski – who was linked with West Ham as well as Leicester – will remain at Turf Moor.

Caglar Soyuncu will have easier opponents than Michail Antonio, but his and Leicester’s capitulation on Sunday illustrated the need for a new centre-back. They got one in Wesley Fofana for £32million.

Adrian proved a good stand-in for Alisson at the start of last season. Not so on Sunday. Had his ricks come a week before he may well now be third choice rather than second. Just one day to decide you need another goalkeeper, look for one and sign one, is a tall order.

Spurs back-up Gazzaniga was a reported target while Harry Redknapp claimed they should have gone for Sergio Romero, whose girlfriend isn’t happy with Manchester United for not allowing him to leave.

It was never going to happen, but it would have been marvellous.

It was almost certainly going to happen. It didn’t and it’s marvellous.

If there hadn’t been a failed takeover bid, their summer transfer business would likely be deemed excellent by Newcastle fans as well as the wider footballing fraternity. Callum Wilson’s got off to a flyer; Ryan Fraser and Jamal Lewis are very solid additions. But the scuppered potential for some Toon Galacticos may – for now – still weigh heavy on Geordie shoulders and make any signs of progress feel sluggish compared to what could have been.

Still, it could have been worse…

How Newcastle could line up after takeover collapse with Mbappe dream over https://t.co/1IDJR4W1Ql

The ball crossed the line, Hawk-Eye was on the blink, Aston Villa earned an undeserved point, stayed in the Premier League, and beat the Blades to Ollie Watkins. Chris Wilder admitted Villa had priced his team out of a move for the Brentford striker, who the club had been monitoring for some time.

Sheffield United have scored one goal in four games, while Watkins scored a hat-trick against the champions. The sub-text knife plunges deeper.

Chelsea were prepared to pay £100,000 of Loftus-Cheek’s eye-watering £173,000-a-week wages to secure a loan suitor. Even that sweetener wasn’t enough for Southampton.

On moving “next door” to Fulham, the Chelsea midfielder said: “I watched Fulham at the start of the season and they looked like they’re playing decent football. With this manager, I think I can get back to my best football. That’s the main thing for me, to find my form and help this team win games.”

Lucky he’s not been watching this season.

The Athletic claimed Rudiger pulled out of a loan move to Tottenham because he ‘felt wary of the potential fall out from supporters for playing for one of Chelsea’s biggest rivals’. But having been at the Tottenham Hotspur Stadium the last time he played there in front of fans, there may be other compelling reasons for turning them down.

The former QPR winger may not have scored or assisted for Crystal Palace yet, having joined for £16million this summer, but, by gum, does he look comfortable in the Premier League. West Brom sort of have the wide playmaker roles covered having secured permanent deals for Grady Diangana and Matheus Pereira, but any club linked with Eze looks set to regret not upping their offers.

The Chelsea centre-back reportedly pulled out of his proposed loan move to the Hammers just 10 minutes before the deadline on Monday, instead opting to fight for his place at Chelsea. A big old kick in the teeth for David Moyes, who saw his summer search for a centre-back come to nothing. He’s doing pretty well, given the circumstances.

Diogo Jota’s surprise move to Liverpool sparked rumours that Wolves would ‘enter the race’ for Douglas Costa. He was tipped as a Jadon Sancho alternative, but United didn’t want him, and was seemingly linked with any club with a dearth of options in wide areas. But Juventus’ desperation to get rid of him was a little suspicious. But Bayern Munich have signed him on a season-long loan, so sh*t, he probably is still pretty good.