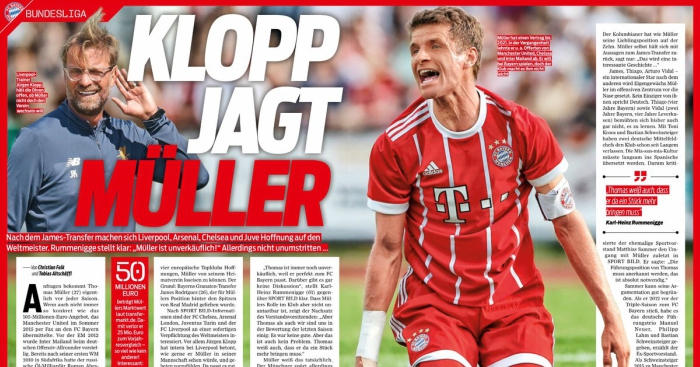 Arsenal, Chelsea and Liverpool are three of four clubs interested in signing Thomas Muller, according to reports.

SportBild claim that the Premier League trio, as well as Juventus, are investigating the possibility of signing German international Muller.

The German daily claims that each club are ‘interested in an immediate commitment from the world champion’, whose place at Bayern is under threat.

Liverpool manager Jurgen Klopp appears to be the keenest of all, with SportBild adding that he ‘has emphasized internally’ how ‘he would like to see Müller in his team’.

Further, the Reds boss has ‘asked to feel’ Muller. Crikey.

Bayern manager Carlo Ancelotti dismissed the idea that Rodriguez was signed as Muller’s replacement on Monday.

“Of course we didn’t buy James to replace Thomas Muller,” said the Italian. “If you think this way you can think he will replace Thiago (Alcantara) because he can play in the centre.

“We didn’t buy James to replace anyone. We bought James to add to the team. He is a good player. I know about his quality and his personality. I think he can help us.”

A reminder that Muller is one of Ed Woodward’s four ‘fantasy’ Manchester United signings.