Home F365 Features One per club: The unsung Premier League heroes of the season 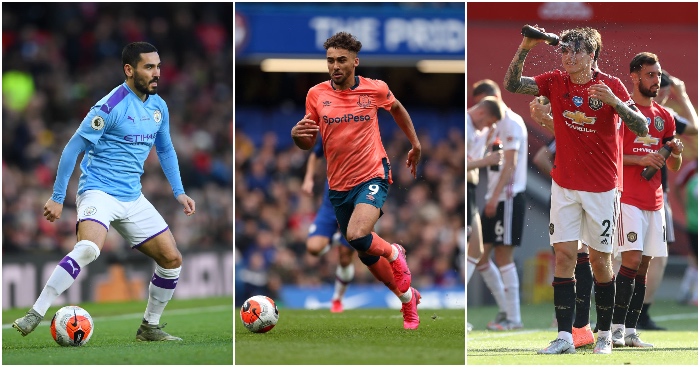 Footballers in the last few weeks and months have shown their heroism through charitable donations, support for the NHS and in standing together in support of Black Lives Matter. But who are the on-pitch heroes? Not the Mo Salahs or the Marcus Rashfords – these are the unsung heroes of the season. And we have one per Premier League club.

Arsenal: Bernd Leno
Bernd Leno is rarely included in a conversation about the best goalkeepers in the Premier League, but certainly should be. Perhaps it’s because he doesn’t play 60-yard raking passes on to the toe of Sergio Aguero like Ederson, or because he hasn’t had the astounding impact of Alisson at Liverpool, with Petr Cech a slightly superior predecessor in north London to Loris Karius at Anfield. In fact, have Arsenal ever had a better goalkeeper in the Premier League? I never really got the David Seaman obsession.

Aston Villa: Frederic Guilbert
Such is the buzz around Jack Grealish, anyone other than the playmaker ends up being unsung in this Villa team. And in truth they don’t have many options besides him – they are staring relegation in the face even with Grealish, one of the best Premier League players of the season. But Frederic Guilbert has been a good summer addition, topping the Villa stats for tackles (3.1 per 90mins) and interceptions (2.1 per 90mins), as well as contributing on the front foot with two assists.

Bournemouth: Diego Rico
To pick any heroes at Bournemouth is tough. The one player that has obviously emerged with any credit this season is Nathan Ake, who is inevitably being linked with a move away as big clubs target easy pickings from those flirting with relegation. Diego Rico has been left on the bench for Bournemouth’s last five games, and Eddie Howe needs to seriously consider getting him back in the line-up. The Cherries have picked up just one point in those matches, and to leave a full-back out who makes the most interceptions (3.3 per 90mins) and is the most creative defender in terms of both assists (two) and key passes (1.2 per 90mins) is an odd decision, even for Eddie Howe, whose head must be in tatters right now.

Brighton: Dan Burn
He’s a two metre tall full-back with dancing feet who once compared Manchester United to a conference team – we love Dan Burn. Other than a four-game spell on the sidelines due to a collarbone fracture, the former Wigan and Fulham man has not missed a Premier League match this season.

Burnley: Ben Mee
The Burnley skipper scored his first first Premier League goal since January 2017 in Monday’s win over Crystal Palace to send the Clarets into eighth place, and pole position for a second foray into Europe. The goal was particularly poignant for Ben Mee, who last week spoke eloquently and passionately about the disgraceful banner the Burnley fans organised to fly over the Etihad Stadium. A hero on the pitch, as well as off it.

Chelsea: Cesar Azpilicueta
The rise of Reece James this season has led many to question Cesar Azpilicueta’s place in the Chelsea team. But write ‘Dave’ off at your peril. Not only is he one of the most consistent players in Premier League history, but also one of the most competitive. You can tell by the way he bites down on his tongue when he’s concentrating and through the almost childlike frustration he shows, whether castigating teammates for silly errors or throwing his hands in the air when a decision goes against him. Frank Lampard will often move Azpilicueta to left-back or into the centre just to have him on the pitch, and if he does leave him out, he’s the first he brings on when the game goes awry.

Crystal Palace: James McArthur
Luka Milivojevic is so often described as underrated that he has become simply rated. But James McArthur – perhaps partly because of the McCarthy-McArthur which one do you mean situation – rarely gets the credit he deserves. He’s started all but one of Crystal Palace’s Premier League games this season, works tirelessly with and without the ball, and leads the club for assists with three.

I didn’t think Calvert-Lewin was good enough to be our long-term answer. Big enough man to admit that he’s proved me wrong in the latter part of the season, blossoming into a Premier League-worthy centre forward. I like being proved wrong on Everton players.👍🏻 pic.twitter.com/Se4PiLCshG

Leicester: Ricardo Pereira
Leicester look very lopsided without him. James Justin is talented but Ricardo Pereira was superb before his cruciate ligament injury, and they really miss providing balance with Ben Chilwell on the opposite flank. If Leicester continue their implosion and fail to qualify for the Champions League, Pereira’s absence will be a big reason why.

Liverpool: Georginio Wijnaldum
If there has been anything more notable than the all-round greatness of Liverpool this season, it’s been the incessant talk of just how great they all are, which means no player is truly unsung. But Georginio Wijnaldum does get some stick in a roundabout sort of way. Liverpool fans are constantly willing on Naby Keita to finally come good and fill the position Wijnaldum currently occupies. He is appreciated, but there seems to be a feeling that his is an area Liverpool can strengthen, whereas others are beyond improvement. In reality, Jurgen Klopp will have to spend a huge amount of money to find a box-to-box midfielder with a game as good as the Dutchman’s.

Manchester City: Ilkay Gundogan
Kevin de Bruyne may be the best midfielder in the world, but he owes an awful lot to Ilkay Gundogan (and Danny Murphy). He’s so uncomplicated and elegant, rarely misplacing a pass and always looking forward, probing for gaps to make the pass before the assist, or to lay the ball on a plate for the goalscorer himself. Pep Guardiola has described Gundogan as a “tactical gift”; what a snip at £24million.

Manchester United: Victor Lindelof
Harry Maguire – the odd tanker-like turn aside – has been a very good signing for Manchester United. The difference in the defensive statistics between last season and this illustrate that. But a significant proportion of that improvement is down to Victor Lindelof, whose stock should have risen to be on a par with Maguire, but is for some reason still languishing, perhaps because he was for a while unfairly lumped in with Phil Jones and the other Manchester United centre-backs deemed simply not good enough.

Newcastle: Isaac Hayden
A classic unsung hero. Isaac Hayden is an easy name to forget when recounting the Newcastle starting line-up, but he’s been a near ever-present in the first XI this season. He’s got two assists, scored the injury-time winner against Chelsea in January and even Matty and Sean ‘best-things-since-sliced-bread’ Longstaff can’t displace him from Steve Bruce’s side.

Norwich: Kenny McLean
Kenny McLean has featured in all but one Premier League game this season, starting 27 of them. He’s scored just once, but that was the opener in their most memorable game of the season – the 3-2 win over Manchester City. Now you can Google what he looks like.

Southampton: James Ward-Prowse
He’s not undervalued by Southampton supporters, but James Ward-Prowse’s performances remain under the radar in terms of the Premier League as a whole. Only super Danny Ings has scored more goals than the midfielder for the Saints (18:5), and he leads the way with three assists. There are few better over a dead ball, and he has the wonderful combination of experience – after seven full Premier League seasons – and relative youth; he’s just 25. A criminally underrated footballer, and one Southampton should be constantly facing a battle to keep hold of.

Tottenham: Harry Kane
Turns out your best player and club talisman can still be unsung. Jose Mourinho recently read out some very questionable stats about the goalscoring records of strikers under him at previous clubs, after Paul Merson claimed Harry Kane would struggle in his Spurs side. This was of course Mourinho defending his own honour, rather than Kane’s, and it only served to ramp up the pressure on the England captain to rediscover his goalscoring form. Kane had scored two in his last four, or hadn’t scored this year, depending on your bias. He of course broke that drought by scoring the winner against West Ham and has 12 Premier League goals in 22 games. They’d be deep in the bottom half of the table without him.

Watford: Etienne Capoue
The less fashionable but more consistent member of Watford’s midfield. If Abdoulaye Doucoure is the name and the face on the front cover, Etienne Capoue is the ghostwriter doing the bulk of the work but taking none of the glory. He tops the Watford statistics for both interceptions (2.4 per 90mins) and tackles (2.7 per 90mins).

West Ham: Michail Antonio
David Moyes has been criticised in some parts for not starting the likes of Manuel Lanzini, Andriy Yarmolenko or Felipe Anderson – players with a huge amount of talent and the ability to unlock defences. The problem is, in a relegation battle you need players that definitely give a s**t. And while that can’t be said with any certainty with those three, Michail Antonio plays like he gives the most s**t out of anyone, ever, in the history of football. The guy is an absolute machine, but is also technically very accomplished. You might really care about West Ham, Michail, but you won’t be struggling for Premier League suitors should the Hammers get relegated.

Wolves: Jonny
Such is the demeanour of Nuno Espirito Santo, he’s essentially built an unsung team, though the pressure is now starting to build. But the most unsung of the unsung is Jonny. He’s started all but seven Premier League games since Wolves’ promotion from the Championship, tops the statistics for tackles (3 per 90mins); interceptions (1.8 per 90mins), and has two assists and a goal to his name this season.