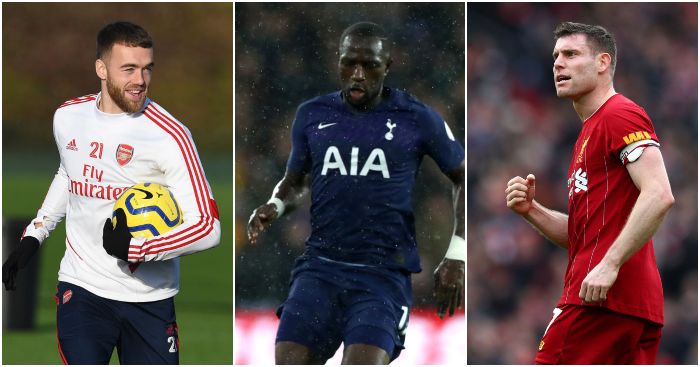 After the news that Manchester United manager Ole Gunnar Solskjaer wants to keep Diogo Dalot because his versatility makes him useful, we take a look at every club and their most useful squad man…

ARSENAL: Calum Chambers
Third-choice right-back, lord-knows-what-choice centre-back after the arrivals of William Saliba and Pablo Mari and central midfield ‘option’ Calum Chambers has somehow played more Premier League football than Dani Ceballos this season, though he missed the entirety of the Gunners’ impressive eight-match top-flight unbeaten run with a cruciate ligament injury that will sideline him until next season, whenever that might be.

ASTON VILLA: Conor Hourihane
He’s no John McGinn but he can ‘do a job’ either as the deepest midfielder or further forward as a replacement in a No. 8 role. He has chipped in with three Premier League goals this season from just 948 minutes so he can be even more than useful. If and when Villa are relegated, he will have a role to play in the Championship.

Conor Hourihane has made some useful contributions for Villa this season. At Newcastle & Norwich (twice), the quality of his left foot made a massive difference. While his general work-rate could improve, his technical ability and set-piece quality is a very useful asset to have. pic.twitter.com/fH4QhovfqD

BOURNEMOUTH: Dan Gosling
Below Jefferson Lerma, Philip Billing and Lewis Cook in any sensible Bournemouth midfield running order but when injuries have struck hard and often this season, Gosling has predictably stepped in and up. Should they survive, he will long remember that winner against Chelsea, even if he was only on the pitch because an injury crisis left Eddie Howe fielding four central midfielders.

BRIGHTON: Solly March
He started the season as a left wing-back and ended it on the right wing, but injuries left us wondering if he would have nailed down any position at all in Graham Potter’s new-look Brighton side. He even had a spell as a No. 10 and left the pitch saying: “It was tough, but you learn the more roles you play.” It’s a bloody good job, Solly. He will presumably stay forever.

BURNLEY: Jeff Hendrick
Unlike most of the other names on this list, Hendrick plays more often than not. But he rarely plays in his favoured central midfield position and instead toils away on the right wing as Dwight McNeil produces magic on the other flank. Two goals and two assists all season tells the story of a reluctant winger.

Jeff Hendrick about as useful as a chocolate fire guard how is this man a professional footballer.

CHELSEA: Cesar Azpilicueta
The Chelsea captain actually lost his place briefly in November but when you can play right-back, right wing-back, centre-back and left-back to a decent standard, you are always going to be needed somewhere. Well in, Dave,

CRYSTAL PALACE: Jeffrey Schlupp
A spell on the left wing ended with the Ghanaian on the bench and him coming on for cameo appearances on the left, right and even as a No. 10. And then just as he was enjoying a little run-out at left-back he got injured. He is Mr Utility Man and a Premier League title winner.

EVERTON: Fabian Delph
The definition of useful, Delph is yet to play at left-back but we have no doubt he would do it without hesitation. He has played in a holding role for the Toffees but has also filled in further forward, though an awful lot of time has obviously been spent in the treatment room.

Fabian Delph would be a good buy for us. Turn your nose up at him all you want but he is a useful hard working player who can slot into different positions. Better then Mccarthy, Davies, Schniderlin, Besic etc.

LEICESTER CITY: Marc Albrighton
What could be more useful than a Premier League title winner happy to play on either flank. He has started just three Premier League games this season (two right, one left) and the Foxes have won them all. He has also chipped in with three assists in 477 minutes of top-flight football; James Maddison has managed the same in 2404 minutes.

MANCHESTER UNITED: Diogo Dalot
He probably did not join United to become the new Ashley Young but that appears to be his fate. Right-back, left-back, right wing-back, occasional defensive-minded right-winger.

The benefit of Diogo Dalot returning is that whilst he will not start as a RB over AWB he will be an option off the bench at LB, RB, RWB (formation switch) and even as a RW. He keeps width well and has a decent level of creativity.

NEWCASTLE UNITED: Matt Ritchie
Having been a right-winger for the whole of his career, Rafa Benitez converted the Scottish international into a left wing-back. Steve Bruce stuck with that plan until injury and then Danny Rose struck, with Newcastle’s switch to a back four leaving Ritchie with no role in the defence. Nae bother – Ritchie just went back to the right wing, where Miguel Almiron had never really looked comfortable.

NORWICH CITY: Sam Byram
Neither first-choice right-back nor left-back but the former Leeds prospect has taken his opportunities when they have appeared. “I knew I was going to have to be patient but I’ve always believed in my ability and I’ve always worked hard, so I tried to keep my head down and try to impress the manager, to be as reliable as I can really,” he said. It’s not sexy talk but managers like that sh*t. It’s useful.

SHEFFIELD UNITED: Billy Sharp
Not useful as a utility man  – he only has one trick –  but it is very bloody useful to have a dedicated striker who can score three Premier League goals in just 666 minutes of football. Devilish useful, you might say.

First game back in premier league and the boy hood blade legend Billy Sharp with the goal, you couldn’t have wrote it! pic.twitter.com/SKCzBYH0fv

SOUTHAMPTON: Stuart Armstrong
Central midfielder in a 3-5-2. Right wing-back in a 3-4-3. A conventional right-winger. A conventional left-winger. And then one of two No. 10s in an unusual 4-2-2-2. But this Jock of all trades was proving something of a master of goalscoring – three in his last six games – before the lockdown. “It didn’t look good, but I always knew in a different shape that I would have more chances for him to play,” said boss Ralph Hasenhuttl.

TOTTENHAM: Moussa Sissoko
Two years ago the answer would have been Eric Dier every time, but it’s Sissoko who has stepped up to become Mr Useful, playing as the deepest central midfielder, in a more advanced role, on the right wing or even at right-back. Spurs were sixth when he got injured in January and they have dropped to eighth and been ejected from two other competitions in his absence.

Watching this back:
1) Sonny was so good and so frustrating.
2) Lucas existed
3) Sissoko was such an unquantifiable midfield presence that we absolutely had to have and still weirdly miss even though it was often not productive.
4) We were legit good and unlucky at the same time https://t.co/C37704RKCs

WATFORD: Adrian Mariappa
To play as a full-back in the Premier League at 33 is quite some ask, but Watford’s fourth-choice centre-half and third-choice right-back stepped up to the plate just as he always has for the Hornets. Unfortunately, his season will be remembered for something other than ‘doing a job’ anywhere across the back four.

WEST HAM: Michail Antonio
Lord knows what he would list as his actual position because he has played left wing, right wing and as a centre-forward this season, with David Moyes somehow resisting the urge to play him at right-back. We do know that West Ham miss his pace and power when he is not available.

WOLVES: Leander Dendoncker
If you find a player equally comfortable at centre-half and in central midfield, hold him ever so tightly. Wolves fans prefer Dendoncker in central midfield but in the absence of Willy Boly he was very useful indeed at the back. He probably does not play anywhere in a first-choice Wolves XI (see first leg of Europa League clash with Olympiakos) but he is still one of nine Wolves players to log over 3000 minutes of football this season.