Home F365 Features One per Premier League club: Unwanted players up for sale 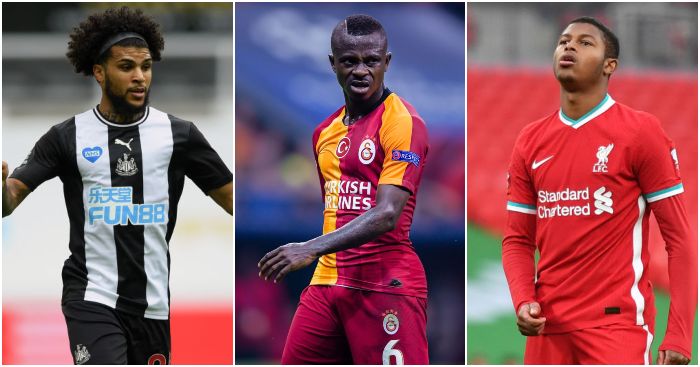 None of these players have even made a Premier League bench this season. We have ruled out those like Mesut Ozil who are pretty much unsellable.

ARSENAL – Lucas Torreira
There was a time when the Uruguayan midfielder looked really rather good and as recently as December, he was Arsenal’s Player of the Month. But he has fallen further and further out of favour; you know when Mo Elneny returns from loan and leapfrogs you in the central midfield standings that you have an issue. He is now waiting for Atletico Madrid and Arsenal to sort out their sh*t, though his stellar spell at Sampdoria guarantees that he has alternative options in Italy.

ASTON VILLA – Bjorn Engels
A year ago we wrote this: ‘Villa signed three centre-backs this summer and the assumption was that Engels might find himself the odd man out after Dean Smith bought Ezri Konsa from his former club Brentford. But Engels, the cheapest of the trio at £7million from Reims, has been the stand-out performer in Smith’s defence, taking to the Premier League like a 6ft 4in duck to water.’

It went downhill quite badly in the second half of last season and now Villa would like to recoup some of that £7million, thank you. But it seems unlikely that suitors Anderlecht will have that kind of money.

BRIGHTON – Tudor Baluta
He has played more games for actual Romania (7) than Brighton (1) and he has made it only as far as the EFL Trophy after a loan spell with Alan Pardew’s ADO Den Haag last season. The Romanians want him out of Brighton and just about anywhere else; we suspect Brighton feel the same.

Now let’s see what is happening with Tudor Baluta, Dragomir, Marius Marin… no news all this time especially for the first two. They need clubs ASAP.

BURNLEY – N/A
Good luck finding any Burnley players left at Burnley who are a) fit and b) surplus to requirements.

CHELSEA – Tiemoue Bakayoko
We could have chosen any of Victor Moses, Danny Drinkwater or Emerson, but Bakayoko is the only player on that list that could demand anywhere close to the £32m Chelsea apparently want for the Frenchman, who last played for Chelsea in the 2018 FA Cup final. PSG and AC Milan are both said to be interested. He is not quite as good as N’Golo Kante.

CRYSTAL PALACE – Christian Benteke
The big man has been injured, but it seems doubtful that he would have been anywhere near the Palace side even if he were fully fit. It is thought that the Belgian man mountain (who scored two Premier League goals last season) is available for as little as £10m, leaving Club Brugge looking down the back of the sofa for cents. This new version of Palace is rather good and has no room for Benteke.

Allow me to explain…

Benteke is on big money, we’d like to sell him, Wickham the same. Zaha plays wide and drifts in a free role, Eze is a 10/left winger, Ayew isn’t a natural striker, that leaves Batshuayi as the only out and out striker Hodgson trusts.

EVERTON – Fabian Delph
There was a time when Delph looked like an absolute no-brainer of a transfer for Everton (some idiot called it ‘the most basic, sensible deal of the f***ing summer’) but it has been nothing short of a disaster. He started only 13 Premier League games last season as predictable injury struck and struck again. And with Allan and Abdoulaye Doucoure both now signed to swell Everton’s ranks, there seems no way back for Delph. Links with Burnley have shocked literally zero observers.

FULHAM – Jean Michael Seri
Both club and player would like to end this relationship as soon as humanly possible. Seri struggled in the Premier League two years ago after his £27m move and will not be staying around for another shot. The first club that offers £18m for the Ivory Coast international can take a player once strongly linked with Barcelona long before we realised that somebody at Barcelona had lost the plot. The current favourites for his signature are Inter Milan. “Inter is the first choice for him. He is in love with the Nerazzurri,” says his brother/agent/hype man.

LEEDS UNITED – Barry Douglas
“I’ve been told by sources about the boy at Leeds, Barry Douglas. Maybe something is happening with that in the background, I do not know. I do not know what the situation is but I have heard that he is a really good player,” said Frank McAvennie this week as he discussed possible Celtic targets. The ‘boy’ is 31 and his season is likely over now Leeds are out of the Carabao Cup.

LEICESTER CITY – Islam Slimani
Yes, still a Leicester player along with Adrien Silva and Rachid Ghezzal, also expected to depart this summer. The 32-year-old Algerian scored goals in Ligue Un last season so there should surely be some desperate club willing to take a punt on a player who last played (and scored) for the Foxes in the Premier League in January 2018. He’s absolutely nailed on to sign for West Brom on deadline day.

Since you won’t leave it alone nor will I ..

I can assure you numbers have never been discussed with me so who tells you this stuff and for what reason 🤔
And why is it ok to just write it? https://t.co/GAAeGzyKw1

…but what was clear from the stories throughout the Liverpool media was that the club were prepared to sell the 20-year-old striker for a fee rising to £25m on the condition that the Reds could buy him back for £37m. Canny, canny business if they can pull it off.

MANCHESTER CITY – Nicolas Otamendi
We broke our own rules with this one because Otamendi did make it as far as a Premier League bench on Monday night, but the Argentine will make it no further once Aymeric Laporte is available and City buy another centre-half. The latest rumours are that Otamendi might be sent to Spain as a makeweight in the Jules Kounde deal. He will be oddly missed.

MANCHESTER UNITED – Jesse Lingard
Ole Gunnar Solskjaer is unlikely to admit it out loud – not when he wants a Carabao Cup tune out of Lingard – but the English midfielder is surely up for sale along with (takes deep breath) Marcos Rojo, Chris Smalling, Phil Jones, Andreas Pereira and Diogo Dalot. We chose Lingard because he seems the most likely to find a suitor who will pay upwards of £25m for his services. Everton links were predictable but we’re not sure he is quite as good as James Rodriguez. Spurs it is then…

Don’t mock the Jesse Lingard rumours, until you’ve looked at his stats.

NEWCASTLE UNITED – DeAndre Yedlin
“I’ve got huge respect for him because he’s done very well since I’ve been at the club but he’s probably another one where he looks at it and thinks, ‘Hang on a minute, I’m not in the team and we’ve got three right-backs,'” said Steve Bruce this week. In other words, ‘on your bike son’. Yedlin will not be short of options, with Besiktas and Inter Miami touted as possible destinations. It goes almost without saying that Henri Saivet, Rolando Aarons and Achraf Lazaar are still at the club and still up for sale.

SHEFFIELD UNITED – Jack Rodwell
“In a sense, because I can play anywhere across there and also midfield, the way the manager here sets his teams up, I reckon it’s just right for me. I suppose if you came up with the ideal system for how I am, this is it. A fresh season brings fresh opportunities and now I’ve got to set my sights on getting in the team on a regular basis,” said Rodwell last month. Having played a total of 73 minutes last season, it seems like a lofty ambition.

SOUTHAMPTON – Wesley Hoedt
They signed him for over £14m in 2017 but the Saints will only expect half that fee if he returns to Lazio this summer. The giant Dutch defender was an absolute disaster in English football but they seem to still rate him in Italy. As Lazio are reportedly set to choose between Hoedt and Shkodran Mustafi, we are left with more questions than answers. Meanwhile, Sofiane Boufal and Guido Carillo also remain on the books at Southampton, highlighting some truly rotten business.

TOTTENHAM – Danny Rose
Not being given a squad number is a hell of a hint that you are not wanted. Even Dele Alli got one. Expect West Ham to swoop any minute. Would he be an upgrade on Aaron Cresswell?

Danny Rose, no squad number and listed at the foot of the first team and in last years kit, fuck me we know how to treat a player with 13 years service. Might be outspoken but shocking behaviour IMO pic.twitter.com/9URDXXBzRS

WEST BROM – Kenneth Zohore
The best of luck to the Baggies in their quest to get a whole £8m from Sheffield Wednesday (or other Championship suitors) for a player who scored just three Championship goals last season.

WEST HAM – Jack Wilshere
There was talk of Wilshere being paid paid to bugger off and then there was talk of Wilshere joining Genoa. But then eventually, after positive coronavirus tests for Josh Cullen and Issa Diop, there was an appearance in the Carabao Cup. He was predictably tidy. There is no doubt that the Hammers would quite like his £100,000-a-week wages off their books, mind.

WOLVES – Ryan Bennett
He started last season as first-choice centre-half at Wolves and ended it as about fourth-choice centre-half at Leicester. And he starts this season entirely out in the cold, surely destined for a move back to the Championship. There’s literally nothing else to say about the man.