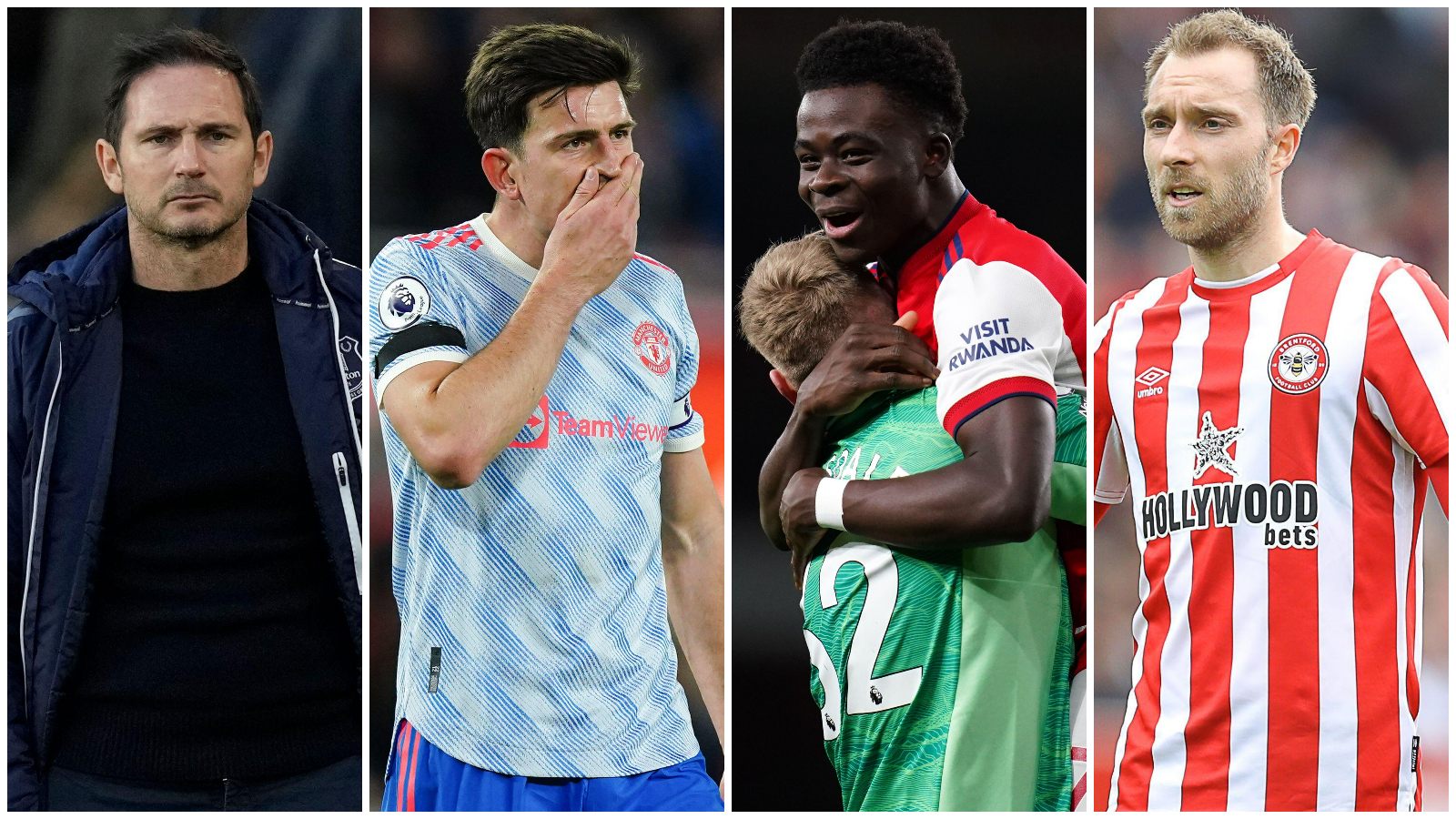 Game to watch – Arsenal v Man Utd
The weekend kicks off with one of the most pivotal games as the Premier League’s shiniest sh*te competition approaches a calamitously-exciting ending.

What are we to expect from United’s trip to Arsenal? F*** knows.

The hosts were in pole position for the final Champions League spot, then they lost three on the spin to Palace, Southampton and Brighton. So obviously they then went to Chelsea, scored four and claimed all three points.

United? Well, we can be a little more certain of what to anticipate from United. Nothing.

That’s what they offered at Anfield on Tuesday night when a season of perpetual disappointment slumped to a new, horrifying low. One that prompted United to rush through the announcement of Erik ten Hag as the latest sucker to sit in the hot-seat from next season.

Might that news and the knowledge that the new manager is watching provoke any kind of spark from Ralf Rangnick’s players? It really ought to. As much as United fans might want to dump the entire squad with the odd exception, many of these players will still be around when Ten Hag throws out the cones in pre-season. There must be some professional pride buried under all the apathy and self-interest to motivate some of these under-performers to make a rather more positive impression on the new gaffer in the final five games.

And, somehow, United are still in contention for the top four. These sh*tehawks can still qualify for the Champions League. A United victory at the Emirates would leave them, Arsenal and Spurs all tied on 57 points, even if the Red Devils have played a game more. But since Arsenal and Spurs are yet to meet and there’s b*gger all chance that any of them will go the remainder of the season without dropping points, fourth is still very much up for grabs.

In that respect, Saturday feels more must-win for United than Arsenal. But the Gunners are all about momentum, with the mood at the Emirates changing with the prevailing wind. To beat Chelsea then lose to this United would be very Arsenal, which is exactly the image they need to shake.

Player to watch – Christian Eriksen
When Tottenham have digested the result from the Emirates on Saturday afternoon, their focus must turn to Brentford, whom they visit in the evening kick-off.

Spurs have some bouncing back of their own to do this weekend after a hugely impressive run of form was brought to a shuddering halt by Brighton. The result, and the late nature of it, was bad enough but the performance offered a depressing reality check for any Spurs fans optimistic that Antonio Conte had shed them of their Spursiness.

Brentford offer an intriguing challenge after the Bees’ own resurgence in recent weeks. Only a few weeks ago, Thomas Frank’s side looked in danger of being sucked into the relegation fight, but after five wins in six and victories this month over capital rivals Chelsea and West Ham and London-ish Watford, Brentford find themselves one point off the top half.

Eriksen has been central to that revival after his own personal resurrection, with the Denmark star scoring once and offering a couple of assists in his last four games. Spurs know Eriksen well, of course, as does Conte after the pair worked together at Inter Milan. Indeed, reports suggest the manager is keen to be reunited with the playmaker this summer. But more immediately, Spurs need to find a way to deprive Eriksen of the space to pull Brentford’s strings. Which could see one of Conte’s favourites and the recipient of a new five-year contract, Oliver Skipp, return to the XI for the first time in three months.

Team to watch – Everton
Normally, before a Premier League derby, we might spin a chasm between cross-city rivals with some old trope about form going out of the window. But who in good faith can make a genuine case for Everton at Anfield on Sunday?

Manchester United fans trekked to Liverpool on Tuesday night with little genuine prospect of victory and next it’s the Toffees’ turn to cross Stanley Park on what appears to be little more than a fool’s errand. Anything other than an absolute pasting would probably be accepted by most Evertonians now.

That might sound odd given what’s at stake for the Premier League’s fourth-from-bottom side. But Frank Lampard would willingly accept no improvement in their status in the coming week or so as long as things don’t get any worse.

“We have to understand that the table might continue to look somewhat like it does for the next couple of weeks. And then we can look at the fixtures going on from that. But, for the players, they just have to focus game-by-game – because anything can happen in football. That’s why I’m not talking us down before Liverpool, because we have to go there with the belief and spirit to try and do something.”

As Lampard will have learned from his three-month reign so far, the need for spirit or belief is never enough alone to generate either. Another injury-time goal against Leicester on Wednesday might help, though that was supposed to have been the case after Newcastle were beaten last month. A few days later, Lampard was questioning Everton’s “bollocks” after being turned over at Palace in the cup.

But he’s right: for the sake of morale, Everton have to “try and do something”, which would at least better United’s Anfield effort. If Burnley buck up, they could plunge Lampard’s lads into the bottom three by the time they host Chelsea a week on Sunday. That prospect in the wake of a derby humiliation should be terrifying for the Toffees.

Manager to watch – Thomas Tuchel
Some managers have mastered their poker face; others find it impossible to keep it on the inside. Tuchel is firmly in the second camp, and we kinda love him for it.

The Chelsea boss could not hide his disgust with Chelsea for the manner of their defeat to Arsenal on Wednesday. He attempted some piffle about the pitch at Stamford Bridge but seemed to realise straight away it wasn’t serving as the distraction he hoped.

It was a chastening night for everyone at Chelsea. Tuchel’s frustrations were shared by the fans, who jeered record signing Romelu Lukaku after he was hooked again, and argued with captain Cesar Azpilicueta, who seemed more ready for some to-and-fro than the bloke who sparked it.

Some frustration is understandable, especially in the limbo Chelsea exist in until the sale of the club is complete. And their home record is certainly a concern; losing to Arsenal made it three Stamford Bridge defeats on the bounce for the first time in 29 years. But the sense of crisis around Chelsea feels somewhat extreme when you consider that they remain snug in third place with an FA Cup final on the horizon.

Still, Tuchel has some work to do to ensure that streak of home defeats doesn’t extend to four against a rather more buoyant West Ham on Sunday. Picking a stronger back three would be a start. Perhaps we shouldn’t have been surprised to see Chelsea cave in the absence of Thiago Silva and Antonio Rudiger, but Tuchel needs to find a way to cope without both, especially in the case of the German approaching free agency.

EFL game to watch – Huddersfield Town v Barnsley
This Friday night Yorkshire derby has plenty on it for both sides. If the Terriers triumph, they are guaranteed a play-off place. If Barnsley lose, they will be relegated to League One.

Find out why it’s a huge weekend, not only for Town and the Tykes, but also for Mitro, Millwall and Nathan Jones in Benjamin Bloom’s preview of the Championship match-ups.

European game to watch – Bayern Munich v Borussia Dortmund
It’s a Big Weekend in Serie A, where it’s a Milan v Rome double header. Roma go to second-placed Inter on Saturday night, which precedes AC Milan’s trip to the capital to take on Lazio. But while Jose Mourinho is back at the San Siro, in Germany, it’s Der Klassiker time.

The stakes are simple: if Bayern win, they seal an unprecedented 10th Bundesliga title on home soil against their closest rivals for the crown.

It bodes well for the Bavarians that they’ve had much the better of recent Klassiker clashes. Bayern have won nine of the last 10 including all of the last six.

But Erling Haaland has returned to goalscoring form just in time for Saturday and Bayern’s defence has shown vulnerabilities. The Saturday evening meeting also promises to be the final showdown between Haaland and Robert Lewandowski, with both hit-men set to embark upon new assignments this summer.