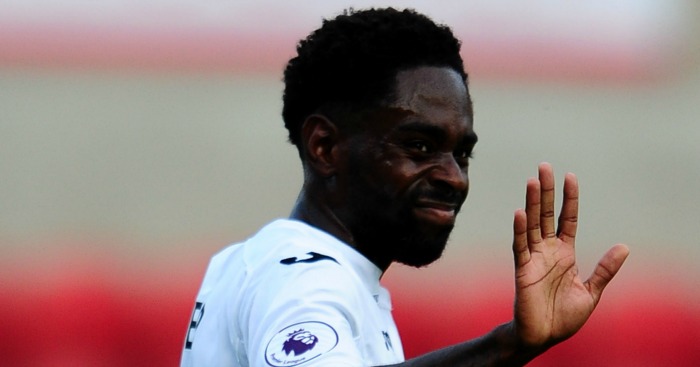 Winger Nathan Dyer has signed a new four-year contract with Swansea despite his last Premier League start coming in May 2015.

The 28-year-old, who picked up a Premier League winner’s medal during his loan spell at Leicester City last season, joined the club from Southampton in 2009.

Dyer, who had one year left on his previous contract, is the second Swansea player to commit to the club in as many days with Gylfi Sigurdsson also signing a new four-year deal.

Dyer, who has scored 31 goals in 271 appearances for the club, told Swans TV: “I was on loan last season, and had a good year at Leicester and the experience I got was unbelievable but I’m happy to back at the club that first gave me my opportunity to show what I can do.

“I want to repay the club so it’s nice to have signed a new deal.

“I was going into the last year of my contract but the new deal will keep me here until I finish (my career).

“I’ve always seen myself to be here, ‘once a jack always a jack’ so you can say, I came here when I was younger I’ve learnt my trade. We’ve won and achieved so much and we’ve made history at this club.

“In pre-season I had to show the manager (Francesco Guidolin) what I was capable of because he hadn’t known of me so it was nice to speak to him. He was obviously impressed and wanted me to stay.

“I’m excited with the boys here, I know there’s been a few talks about people coming and going but hopefully that will settle down in the next couple of days and we can focus on the start of the Premier League.”

During his time at the Liberty Stadium, Dyer has helped the Welsh club secure promotion to the Premier League and played an integral role in Swansea’s Capital One Cup triumph over Bradford in 2013 – the first major trophy in the club’s history.