Home All The News Premier League winners and losers 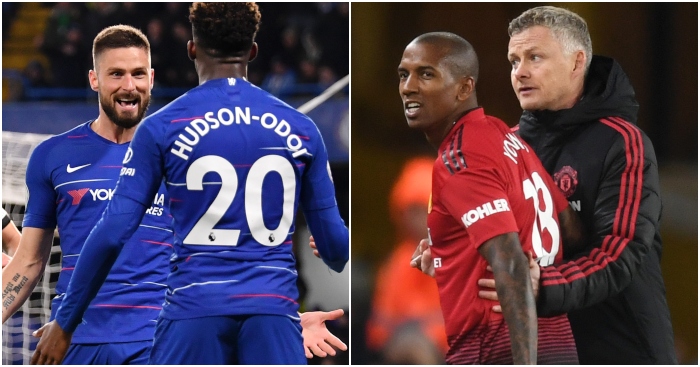 Chelsea’s young pair
Maurizio Sarri is in ‘cannot win’ territory, and he should not expect to leave it for some time. If Chelsea’s manager now picks Callum Hudson-Odoi and Ruben Loftus-Cheek on a regular basis and sees them thrive, his critics will reason that a grave error was made in not picking them earlier. If the pair are picked and perform poorly, it is because Sarri has eroded their belief. If they are relegated back to the bench now, Chelsea’s manager will have a mutiny on his hands.

All Sarri can do is win matches, ignoring the chants against him from the stands and getting on with a job that could still see Chelsea finish in the top four and win the Europa League (they are clear favourites for that competition).

But when you watch Hudson-Odoi’s dynamism on one wing creating more space and time for Hazard on the other, watch Giroud and Hazard link up and watch Loftus-Cheek dominate in central midfield and produce such a wonderful strike, it does raise several questions about Sarri’s persistence with Gonzalo Higuain, Pedro/Willian and Mateo Kovacic. And none of the answers are pleasant reading for Sarri.

Nuno Espirito Santo
The next cab off the rank for any discerning elite club. There is no suggestion that Nuno is looking to engineer a move (and he clearly has a natural loyalty to this project), but that shouldn’t stop the sharks from circling. Wolves are enjoying a sensational season. Nuno is more responsible for that than anyone else. Yes, even Jorge Mendes.

Plenty – *raises hand* – scoffed when Wolves outlined their plans to break into the Premier League’s top six, but that ambition now deserves to be taken seriously. Their form against the biggest and best in the division this season has been astonishing. Create a league table of matches between the current top seven, and Wolves sit third behind only Manchester City and Liverpool. Their 1.3 points per game is higher than Arsenal (1.18), Chelsea (1.2), Tottenham (0.91) and Manchester United (0.7).

And still they keep on improving. Wolves took their eye off the ball against Burnley on Saturday, but in the space of three weeks they have beaten Manchester United twice and reached their first FA Cup final in 21 years. If this club is reaching heights none considered possible before Nuno’s appointment, they are showing little sign of choking as the stakes get higher.

Tottenham
There’s no place like new home. Tottenham may not have sparkled and dazzled during their stadium debut, but Mauricio Pochettino won’t give two hoots about that. The new ground is everything anyone wanted and more, and the noise produced by the South Stand something truly extraordinary.

Pochettino has repeatedly stressed that this is a stadium which must host Champions League football, and after a run of one point from a possible 15 Tottenham are back up to third. Three of their next four games are against Manchester City, but Huddersfield, West Ham, Everton and Brighton are the other confirmed guests at the Tottenham Hotspur Stadium between now and the season’s end. That provides a chance to establish some home dominance and secure their top-four place.

Phil Foden
Finally a first league start. The next step is being selected for a match when City aren’t 1/14 to win, but that’s beside the point for now. Foden looked every bit at home in midfield. His greatest strength is playing with the composure of a 30-year-old at the age of 18. Now to lead England Under-21s to glory in the European Championship this summer, please.

Manchester City’s home dominance
It’s all getting a little silly. Since the astonishing home defeat to Crystal Palace in December, Manchester City have won 11 straight home games including fixtures against four of the current top seven. In those 11 games, City have conceded three goals and scored 48 times. A goal difference of over four per game. Christ.

Diogo Jota
A player who has drifted almost entirely under the radar. Jota only turned 22 in December, but has seven goals and four assists in the league this season.

More pertinently, he has benefitted from Nuno’s switch in formation and new role as support striker to Raul Jimenez. In 12 games as a striker Jota has contributed nine goals and assists including two winners against Manchester United. He now merits serious consideration for the PFA Young Player of the Year award.

Watford’s ruthless home form
If Javi Gracia had one regret during this excellent Watford season, it would be his side’s inability to regularly compete with the best. Their ten fixtures against top-six clubs have produced only three points, earned in a home win over Tottenham in early September.

But the flipside to that negativity is Watford’s ruthless home form against the rest. Vicarage Road is hardly the most intimidating atmosphere in the top flight, but it’s home sweet home for Watford. They have now taken 23 points from a possible 30 at home to non top-six sides.

Olivier Giroud and Eden Hazard
This column has been touting Giroud to start over Gonzalo Higuain for some time, and on Wednesday got its wish. If Loftus-Cheek and Hudson-Odoi starting was the obvious headline news, Giroud starting his first Premier League game since December 30 was another indication that Sarri may be ceding some of his stubbornness.

I wrote earlier this season that Giroud was the most important non-scoring striker, and I stick by that. Since August 2017, and including matches for Arsenal, Chelsea and France, Giroud has started 56 matches. His teams’ record in those matches: Won 43, Drew 9, Lost 4. Each performed better with him than without.

Most importantly for Sarri, Giroud enjoys a wonderful relationship with Eden Hazard that Hazard is only too happy to shout about. The pair have started ten games together in all competitions this season, of which Chelsea have won eight and drawn two (away at West Ham and at home to Liverpool). In those nine games, Hazard has scored seven goals. Or, to put it a different way, 59% of Hazard’s goals in all competitions this season have come when Giroud has been on the pitch and they have only started nine games together.

Scott McTominay
A mightily disappointing evening for Manchester United, but McTominay will remember it as the night on which he scored his first senior goal. Jose Mourinho might have picked him as a central defender as a loaded message to Manchester United’s hierarchy, but with doubts over the future of Paul Pogba and Ander Herrera it’s a good time to impress Ole Gunnar Solskjaer.

Fulham, footballing magpies
It is a decent measure of Fulham’s season that Scott Parker was talked up for the manager’s job on a permanent basis having lost each of his first four games in charge. Now four straight defeats has become eight, and an admission from Parker that his team lack nous. Add that to a long list.

Fulham have now entered their fourth month without an away point. Even when they establish a foothold in a game, as per their equaliser at Vicarage Road on Tuesday, you can have no faith in their ability not to let it slip out of their grip like a handful of sand. For all Huddersfield Town’s misery this season, Fulham spent £100m, are only three points ahead and were relegated three days later. They are the most spectacular Premier League implosion since QPR in 2011/12.

Now the soul-searching must begin. Fulham have alienated many supporters through ludicrously high ticket prices having reasoned that they were in the big boys’ club now. They allowed the son of the owner to remain in de facto charge of transfers and watched on as he got distracted by shiny transfer market objects like a footballing magpie. They signed a collection of individuals when they needed to improve a team. Fulham would have done no worse (and likely far better) had they kept the same team as last season and kept the same manager too. That should shame those who opted for the opposite approach, and act as a reminder to those who are promoted this season.

The bottom three, and the gap
As per football writer Richard Jolly, the Premier League’s current bottom three have played 31 league games against the current top six this season. Not only have they lost all 31 matches, they have conceded 91 goals at a rate of almost three per game. Anyone can’t beat anyone in this league.

Ole Gunnar Solskjaer’s tactical gamble
Jose Mourinho was mocked for picking McTominay in central defence, so it’s only fair that Solskjaer gets the same treatment. Ashley Young may be many things; winger, full-back, bird poo eater. But he is categorically not a central defender. And that must be the end of the least successful experiment since the builders of Pisa chose to build their tower on soft soil.

By playing Young on the right side of a back three and instructing Diogo Dalot to attack from right-back, Solskjaer was hoping to replicate England’s style in the World Cup when Kyle Walker played the Young role. But Walker is a better defensive full-back than Young, who was consistently caught between his two positions and then collected two yellow cards for his troubles.

In the immediate future, Solskjaer has a full-back problem: Young is now suspended for one game and Luke Shaw for two having reached ten yellow cards. In the bigger picture, Manchester United have now lost three of their last four games and have been pushed back into sixth place. Their next six matches include Barcelona (twice), Manchester City and Chelsea at home and Everton away, and they are now 3/1 in places to finish in the top four. Sh*t, as they say, is about to get real for Ole.

Benjamin Mendy
Players should never be dissuaded from being themselves and having a personality, but there comes a point when you just want to shake Mendy. He’s been injured on and off ever since he arrived in Manchester for a fee of more than £40m, for which he bears no guilt. But in his pre-match press conference, Pep Guardiola confirmed that Mendy had been spotted in a nightclub at 3.30am on Saturday morning when he was due to attend training later that day.

Guardiola may have stressed that he was not Mendy’s father and couldn’t therefore tell him how to live his life, but he is his manager and considers total professionalism as a minimum expectation. Mendy is wasting his chance under the best manager in the world. One day, he might just regret it.

Roy Hodgson’s safety-first approach
Uncle Roy has done a fine, fine job in taking Crystal Palace out of trouble, albeit with the best side on paper in the bottom eight. But he must learn to have a little more courage. We saw what Palace can do when they take on a team during the memorable victory at the Etihad in December. That should have been the blueprint for every other game.

Yet on Wednesday, Palace barely attempted to unnerve a side that had the pressure of playing their new stadium for the first time and who had taken one point from their last five league games. Tottenham didn’t even have to play that well to brush Palace aside.

Gabriel Jesus
He’s scored six league goals in 974 minutes this season. By way of comparison, Loftus-Cheek has five in 564 minutes. It isn’t easy for a young striker to sit on the bench and then hit the ground at sprinting speed when he is called upon, but that rate just isn’t good enough given the service that comes your way in this Manchester City side.