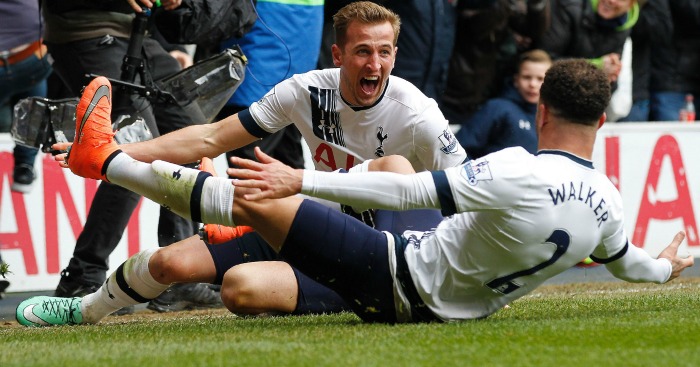 Toby Alderweireld
The odds for the PFA Player of the Year are indicative of our infatuation with attacking players and obsession with young, English talents. Jamie Vardy, Riyad Mahrez, Mesut Ozil, Dimitri Payet and Harry Kane make up the predictable (but fully understandable) top five.

There are 15 players quoted with odds for the award, ranging in price from evens to 100/1, yet the Premier League’s best defender this season does not even merit a mention. Should Tottenham pip Leicester to the Premier League title, there is a strong case for Alderweireld winning the gong. And yet there is absolutely no chance of that happening.

Last season, Tottenham conceded 53 league goals. That was the highest number in the top half, the same as relegated Burnley and more than relegated Hull. Since then, the Premier League’s joint-14th best defence has become the best, and the only new member of the usual back five is Alderweireld. He was also part of a Southampton defence that conceded fewer goals than all but one team last season.

The statistic is startling. Since arriving in England, Alderweireld has started 56 matches and only conceded 46 goals in those games. He is the central defender Manchester United, Chelsea, Arsenal and Manchester City should have signed, and he’s leading Tottenham to places they have never been before.

Premier League goals since the beginning of last season:

One-season wonder my a*se. And I for one doubted him.

Dele Alli
Missed terribly in midweek when suspended for the trip to Dortmund, Alli was back on Sunday to demonstrate just how far he has come. When was the last time the odds for Young Player of the Year were stacked so firmly in one player’s direction?

Alli now has 15 goals and assists combined this season, sitting in equal tenth position by that measure. To put his development in perspective, Alli is almost three years younger than every player above him. Seven of the nine ahead of him in that list are more than half a decade his senior. And he’s ours!

Graziano Pelle
You suspect that Pelle’s goal drought might already have persuaded Ronald Koeman to upgrade his striker in the summer, but Saturday’s goals came as a reminder of just what the Italian can do. Thirteen goalless games and 885 playing minutes were eradicated in style.

Pelle is a frustrating striker, yet one who it is impossible not to like. His shot accuracy this season is a woeful 35% and his conversion rate of 15% below many of his Premier League counterparts, yet when he finds space in the box and heads home as for his equaliser on Saturday, you wonder how he doesn’t score many more. He is a magnificent player to watch when in form, but… and there’s always the but.

“It was a great response from Graziano today,” Koeman said. “He was strong and kept the ball and scored two goals. I understand you can’t score two goals every week but as a striker you need to be important. He knows he’s a big personality and he had a great game today.”

It’s just a shame we had to wait so long.

Bournemouth
Three consecutive league victories for the second time this season, and at the perfect time to secure the club’s Premier League safety. Given the serious injuries suffered by Max Gradel, Callum Wilson, Tommy Elphick and Tyrone Mings, this has been a stunning effort from Bournemouth. It’s also flown almost entirely under the radar.

This is a table created since the beginning of December (courtesy of the wonderful Statto.com), highlighting the superb job done by Eddie Howe. This is not a team of stars, but a squad formed of those loyal to the club and their manager. The morale at Bournemouth is like no other club in the Premier League, and it’s helped them through.

At the start of the season, Simon Francis told me how the players are excited to train every day under a manager who they believe is set for the very top. When the going got tough, Howe proved them right.

Max Gradel
Having suffered a serious injury in August, it was always going to take Gradel a few games to grow back into the pace of the Premier League. An excellent display at St James’ Park last weekend was followed by a match-winning performance against Swansea. Again, just how good could Bournemouth have been with him and Wilson fit all season?

Norwich
One unexpected step forward, and some vital confidence gained at Carrow Road. Norwich’s next two home fixtures are against Newcastle and Sunderland. That’s the season right there.

Manuel Pellegrini
England’s richest clubs now each have a maximum of one competition to play for. Manchester United have the FA Cup, Arsenal have the Premier League, Chelsea have… ah well, and Manchester City now only have the Champions League after a dull draw at Norwich effectively ruled them out of the title race. Should Leicester beat Newcastle on Monday evening, Pellegrini’s side will be 12 points behind with nine games remaining and three teams to get past. The maths don’t work, as The Verve didn’t sing.

For Pellegrini, a CV is being undermined. Until the beginning of February, he garnered much of the sympathy for his expected departure. As Sarah Winterburn wrote, this was a man about whom nobody could find anything bad to say. Six weeks later and it is City supporters cursing their manager’s limp inaction.

City have now won two of their last eight games in 90 minutes, the first-leg victory over Dynamo Kiev and a home victory over Aston Villa equivalent to a free pass. An FA Cup challenge was given away to Chelsea (although in understandable circumstances) and a title bid has faltered from a position of strength. It is City’s squandering of their league position that is most damaging to Pellegrini’s reputation, and you can forget the party line about Pep Guardiola’s announcement ruining City’s chances. They were struggling long before February 1.

A league table created since the beginning of November sees City in tenth position, behind Chelsea, West Ham, Liverpool, Stoke and Southampton, among others. They have scored only 26 goals in those 18 games, embarrassing for a club with such attacking riches.

The overriding suspicion is that City will come unstuck against one of the Champions League’s elite clubs, and it is fitting that Pellegrini will leave having won only the Capital One Cup in his final season. There is no doubting his serenity, politeness and gentle spirit, but these are not attributes found at the forefront of a true winner’s personality. If City have higher ambitions, they need a more inspiring manager.

Pep Guardiola
His first competitive game in charge of City could feasibly be a Europa League play-off tie. This season, that round includes such luminaries as Astra Giurgiu, Zorya Luhansk and Kairat. Glamour.

English managers
Every week the problem seems to be exacerbated. We’re now left with a situation where Eddie Howe, a manager with 30 matches of top-flight managerial experience, is England’s most obvious hope. For those who assume that I am being hyperbolic, examine the evidence:

Stoke City
A season over in mid-March. The optimists will say that the security of mid-table acts like a comfort blanket. The pessimists will look at Everton, Crystal Palace and Watford in the FA Cup semi-finals and wonder what might have been. All are below Stoke in the table and all too surely safe from relegation.

Patrick Bamford with his best impression of a Sunday league player after a big night! https://t.co/9McUftDT1f

Scott Sinclair
Another dreadful season for Sinclair. Given 20 minutes to impress off the bench against Spurs, he touched the ball seven times, completed two passes and was caught offside once. He reportedly earns £2m a year for this sh*t.

Joleon Lescott
Lescott started a competitive game for England less than three years ago, which takes a while to sink in. He also won a Premier League winner’s medal the season before last, which is all kinds of wrong. How the never-really-mighty have fallen.