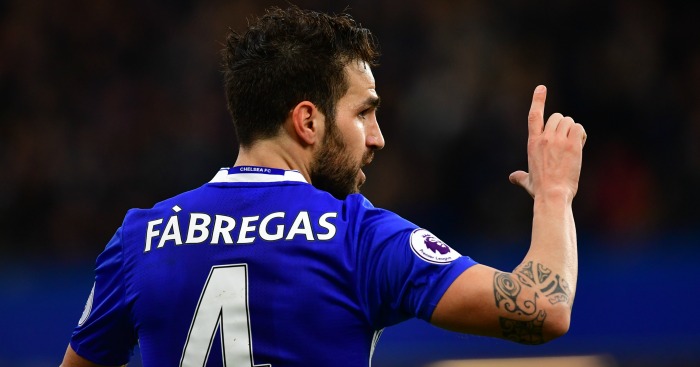 Harry Kane
The last English player to score multiple hat-tricks in the same Premier League season was Wayne Rooney in 2011/12; Kane has two in his last six weeks, and scored another against Fulham in the FA Cup in between. When he’s hot, he’s very, very hot.

For all the doubts about Kane’s performances – and corner-taking – for England during Euro 2016, this is no longer a striker in a rich vein of form at the start of his career but a reliably prolific Premier League goalscorer. Since November 2014, Kane has 65 goals in just 88 league games, and he has done so with precious little rest or back-up. That’s 11 more than his nearest rival.

Tottenham’s second chancers
Tottenham had let their manager down again. To fail to beat Gent – currently seventh in Belgium’s First Division A – in the first leg was disappointing, but to concede two sloppy goals and lose their discipline at Wembley in the second leg was unacceptable. If Thursday was the chance to remove the Wembley ‘hoodoo’, Spurs only allowed a few more skeletons to climb into the closets.

In those circumstances, a manager is given two alternatives. He can ring the changes, hoping that freshness brings improvement and a shift in impetus; Mauricio Pochettino could have reasonably picked Heung-min Son and Harry Winks, both of whom impressed as second-half substitutes in midweek.

Or a manager can stick with the same plan and demand proof from those under-performing players that Thursday was the exception rather than the worrying new rule.

Pochettino chose the latter option. It helps to have a willingly weak opponent when trying to get back to your feet, but Tottenham deserve credit for their response to Europa League exit. Twenty-one shots, 19 chances created and the opportunity to play the last half-hour at 60%. For at least six days, Tottenham are Chelsea’s closest challenger.

Cesc Fabregas
It is hardly controversial to say that few saw Fabregas as the ideal reserve player. His exit from Arsenal and eventual departure from Barcelona helped to create an image of a footballer who flourishes best when spoilt, or at least accommodated. Build a central midfield around the Spaniard and he will reward you, but fail to do so and it will not be long before he leaves.

Perhaps it is evidence of a player who has done a great deal of growing up since joining (or even leaving) Barcelona, or maybe we just had a warped image of his personality. Fabregas has been forced out of Antonio Conte’s first-team plans this season, yet he remains crucial to Chelsea’s title challenge.

When called on, Fabregas has been sensational. Three goals and seven assists in 639 minutes might be an unsustainable ratio, but it only confirms exactly what we know about his ability to create chances and make a forward-thinking midfield tick. Only two Chelsea players have created more chances despite Fabregas starting only six league games.

Against Swansea on Saturday, he was magnificent. Do not underestimate how difficult it is to infrequently step into a team and system performing at a high level and start at sprinting speed. More shots, shots on target and chances created than any other Chelsea player, just like that.

Fabregas now has 55 league assists since the beginning of 2012/13. That is five more than Mesut Ozil over the same time period in 98 extra league minutes. And Fabregas has one extra goal, too. The dream move back to Barcelona might not quite have worked out as planned, but he is now heading for his third league title in five seasons.

Christian Eriksen
Seven chances created, the highest of any player this weekend. Too often the focus seems to be on what Eriksen doesn’t or can’t do rather than on what he can and regularly does. Nobody has created more chances in the Premier League this season.

Sam Allardyce
There would surely be no football manager who would prefer a 1-0 to a 4-0 victory, but if any individual was to take option A, it would be Allardyce. He didn’t want style, panache or free-flowing football, he wanted a win; a grubby 1-0 win.

If that’s what a fortnight with Big Sam does, you can see why owners of Premier League clubs have fallen over themselves to appoint him. After the 4-0 humping from Sunderland on this ground, Allardyce had all the evidence he needed: We tried it your way, now we’re trying it mine.

Palace had just 39.6% possession, no shots on target and completed only 145 passes during a second half in which Middlesbrough were invited to try and blow down the house following Patrick van Aanholt’s scrappy opening goal. Where Sunderland found straw earlier this month, Middlesbrough found bricks. If the bricks stay in place, so too might Crystal Palace in the Premier League.

Palace supporters will be wary of false dawns after seeing their side immediately fall back into disarray after forward steps under Allardyce and his predecessor, but there is no doubt that this was a performance plucked straight out of their new manager’s manual. While Wilfried Zaha, Yohan Cabaye and Andros Townsend might not consider themselves ideal fits for such spit and sawdust, it is exactly what the club needs right now.

Mamadou Sakho
Our early winner, for a debut that went better than anyone could have expected.

From a position of undue pressure at the end of last year, Koeman has manufactured a run of six wins and three draws from their last nine league matches. Now he’s the second favourite to get the Barcelona job in the summer.

Diego Costa
Over his mini-drought in the Premier League, it was revealed this weekend that Chelsea turned down a world-record bid for Costa in January. That’s a pretty effective way of making you feel valued by your club and manager.

Burnley
A point away from home. A bloody point!

Aitor Karanka is the anomaly. Some may rue managerial sackings as evidence of football losing a little more of its soul with each exit, but the financial oasis provided by Premier League participation is directly responsible for these sackings. Parachute payments mean that relegation doesn’t have to result in financial strife, but it certainly makes competitive irrelevance a possibility for those clubs not funded by billionaires. Don’t hate the clubs, hate the game.

If we can offer anger and outrage at those clubs who do choose to sack previously successful managers, we must at least be allowed to examine why a club has chosen to keep faith in a similarly underperforming manager. Karanka is fortunate that Middlesbrough owner Steve Gibson is widely renowned as one of the most patient in the business.

Karanka could not cry foul if he was sacked this week. Middlesbrough have scored twice in their last seven league games, have taken four points from the last 27 available and are sleepwalking their way to relegation. Those who assume that the problems are only short-term would be mistaken. The only teams Middlesbrough have beaten in the league all season currently sit in positions 14, 15, 19 and 20, and no fully professional club in England have won so few games this season. In the Premier League, Middlesbrough rank 20th for goals, 20th for shots, 20th for shots on target and 20th for chances created.

Remember too that Karanka has been allowed to bring in 13 players on permanent deals in the last ten months, and two other first-team players on loan, including Alvaro Negredo’s £100,000-a-week wages. Finally, four of Middlesbrough’s last six matches are against Arsenal, Chelsea, Manchester City and Liverpool.

Karanka is surely hanging on by a thread purely because Middlesbrough lose games but never get thrashed. They have lost 12 league matches in total this season, but nine of them by a single goal margin and never by more than three. This creates the impression that Karanka and his team are repeatedly unlucky, whereas an alternative theory is that only a slight improvement – under a new manager, perhaps – could see them survive.

Do I want to see managers sacked on an increasingly regular basis? No. Am I surprised that Karanka is still in a job? Oh yes.

Mark Hughes
“We have improved markedly since that game [Stoke’s 4-0 defeat to Tottenham in September]. I would be very surprised if the result was the same.”

You can understand why Hughes might be eager to point out the improvement in his Stoke team, and results as a whole have improved from their difficult start. Yet when your team loses by the same humbling scoreline to the same team three times inside the space of ten months, you should expect questions to be asked.

“We expected more than that,” Hughes said after the latest 4-0 defeat. “At times we were a little bit awestruck maybe. We gave them too much respect and as a consequence they picked us off. We need to get up to speed and understand that wasn’t acceptable.”

Hughes was right to criticise his team’s woefully weak resistance, but repeat the same message three times and it begins to lose all resonance. Demanding more from players who then fail to improve only paints the man in charge in an equally poor light.

Stoke will not be in relegation trouble this season under Hughes, just like they weren’t in trouble the season before or the season before that. But there is nothing quite as demotivating for a football supporter as being ensconced in mid-table and being emphatically reminded that you should know your place. The list of teams that Stoke have beaten in all competitions since the end of 2015: Doncaster, Norwich, Liverpool (then lost on pens), Bournemouth, Aston Villa, Newcastle, Watford, West Ham, Stevenage, Sunderland, Hull, Swansea, Burnley and Crystal Palace.

Eddie Howe
Our early loser. Howe may be one of the game’s eternal optimists, but even he must accept that Bournemouth are getting worse while several of the teams beneath them are improving. The need for a win to stop the rot is becoming desperate.

Bournemouth’s defence and goalkeeper
If this is Bournemouth’s new norm, they will be relegated. Over their last ten league matches, Howe’s team have conceded 2.6 goals per game – the worst record in the Premier League:

The interesting aspect of Bournemouth’s poor defensive record is that they are not facing a huge number of shots on target. In that same time period, Stoke, Hull and Sunderland have all allowed more per game, and West Brom have allowed the same. Similarly, eight different clubs have faced more shots.

Part of the blame therefore lies with Artur Boruc, who has the lowest save percentage of any goalkeeper over the last ten games, exactly 50%. If you get a shot on target against Bournemouth, there’s a quite literal half a chance that it ends in a goal. Against Victor Valdes of Middlesbrough, only two places below Bournemouth in the league, only 20.45% go in.

Yet part of the blame must also lie with a defence that is wholly failing to protect its goalkeeper, for defending is a team sport. Bournemouth are making more errors in positional discipline and marking than they were before, and are probably the worst current culprits in the division.

With that, the buck then gets passed to a manager who has failed to improve that defence despite being given time and funds to invest in his squad. Bournemouth’s seven most defensive players on Sunday shared 213 league starts in their promotion season from the Championship in 2014/15. Their bench contained a goalkeeper, two strikers, two attacking midfielders, a central midfielder and a left-back in Brad Smith who cost £6m and has played 270 minutes in the league this season. The only surprise is that anyone could be surprised by Bournemouth’s defensive issues.

Stoke’s ‘others’
Lee Grant, Phil Bardsley, Charlie Adam, Glenn Whelan, Peter Crouch. Over half of Stoke’s starting XI against Tottenham were over 30 and past their best. There’s only so much Joe Allen can do to give a team some zip.

Hull City
You know the rules: Fail to beat Burnley at home and you don’t deserve nice things.