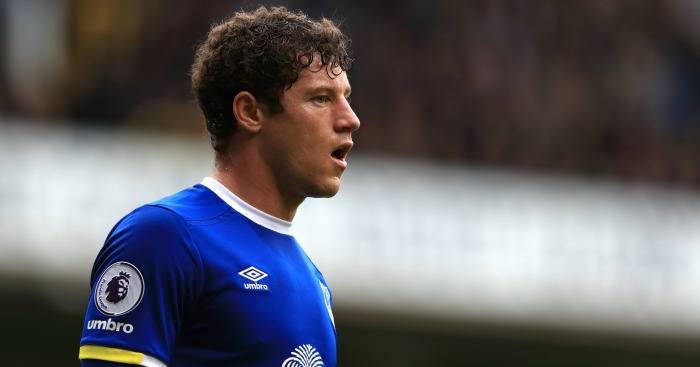 Ronald Koeman and Everton’s defence
Koeman is not the perfect manager and this has not been the perfect Everton season so far, but plaudits for the Dutchman seem few and far between. Too often the focus is on what Everton and Koeman are not, not what they are. They aren’t a realistic challenger for a top-six place, but they have equalled their points total from last season with ten games still to play. And they did brush aside West Brom with one swipe of their attacking armoury and new-found defensive resolve.

Koeman does not merit great praise for Everton’s goalscoring record. In Romelu Lukaku he has one of the best strikers in the league, and, in Ross Barkley, potentially one of its finest attacking midfielders. Still, Everton have scored comfortably more goals per game than Manchester United with all the attackers Jose Mourinho has at his disposal, and that’s after a season-ending injury to Yannick Bolasie.

Instead, it is in defence that Koeman has affected the biggest improvement, as shown by Everton’s ranking in the Premier League (2015/16 in brackets):

Comparing any manager’s defensive organisation to Roberto Martinez’s is likely to make for favourable comparisons, but to have transformed last season’s team into the Premier League’s fourth most miserly defence over the course of a season is still a sterling effort. To do so after the sale of John Stones for £47.5m is seriously impressive. Koeman’s entire bank of first-team central defenders consists of Ashley Williams, Ramiro Funes Mori, 34-year-old Phil Jagielka and Mason Holgate; Leighton Baines has missed more than 20% of the league campaign through injury.

Last season, ten Premier League teams kept more clean sheets than Everton. This season, only Chelsea and Tottenham have more than their ten. Koeman’s team have conceded one goal or less in 79% of their league games, compared to 58% in 2015/16. Given the lack of strength and depth in Everton’s squad, it’s time to cut the manager some slack.

Josh King
Most of the Premier League’s top goalscorers for 2017 are predictable. There’s Harry Kane and Romelu Lukaku, Alexis Sanchez, Troy Deeney, Dele Alli and Jermain Defoe, plus Fernando Llorente, Sadio Mane and Olivier Giroud. And then there’s King, up in third place with eight goals in his last seven matches. It is an extraordinary run of form.

Now 25, King’s career took its time to get going. He failed to make the grade at Manchester United, and didn’t score his first league goal until his third separate loan spell. By the time he joined Bournemouth at the age of 23, the forward had only scored six career league goals.

Not all of Eddie Howe’s signings have worked since Bournemouth’s promotion to the Premier League – and that’s being kind – but King has proved to be a brilliant free acquisition. His 17 goals since the beginning of last season make him far and away Bournemouth’s top league goalscorer since promotion, ably covering for injuries to Callum Wilson and the poor form of Benik Afobe. His recent run might just have ensured another season of Premier League football for both himself and the Cherries.

So often, belief is the key to success. Footballers are humans with human emotions, and so perform better when they feel appreciated, wanted, respected and loved. That should hardly need saying.

At Everton, Oumar Niasse never felt any of those things. Bought by Roberto Martinez but never used, Ronald Koeman was hardly likely to welcome a player he never wanted. Having been told implicitly and explicitly to leave the club, Niasse finally found a home at Hull City.

“Niasse was a player who was different to our other strikers,” Marco Silva said. “He’s one player to come here and help us. He feels as well that we believe in him and that’s important for him and the other strikers.” There’s that word ‘believe’ again. As if by magic, the goals have started flowing.

“It was a difficult time at Everton,” Niasse said after his two goals sank Swansea on Saturday. “I was like standing in the dressing room with the under-23s playing with them, travelling with them all the time. It was difficult, but I always kept smiling and always kept a positive mind to start again.

“The focus is to play the good football, to try to help the club stay in the league. We know anything can happen in the premier league, anyone can beat anyone so we just have to believe in ourselves. Sometimes we have lost concentration and sometimes we were unlucky, but every time the most important thing is we talk to each other and help each other.”

Nobody would argue with any of that, nor begrudge Niasse his fine form. A sincere ‘well done’ is due after all the jokes during his time at Everton.

Ross Barkley
One of Koeman’s biggest tasks at Goodison Park was getting the best out of Barkley, a precocious talent whose career was in danger of drifting after any number of false starts and promises. Unlock Barkley, so the theory went, and you unlock Everton.

Martinez had been keen to shower his attacking midfielder with praise, the arm around the shoulder approach, but Koeman opted for a strategy of tough love. Barkley was criticised publicly in October and November, and in December Koeman said he was worried Barkley would never reach his full potential.

If the theory was that Barkley would react to such stinging criticism, puff out his chest and show his manager what he could do, so it has proved. Only one Premier League player has created more chances since the start of 2017, and only one has contributed more assists. And, to prove those earlier suspicions right, Everton are markedly better for that improvement.

“We need players like Ross between the lines and close to the box,” said Koeman after the game, like a smiling parent itching to hug his child and tell them how proud they were. “We need players like Ross to have shots, to have assists and that is one of his big qualities. The boy is so strong, so good on the ball. He is shooting left, he is shooting right, he is clever, he sees chances.”

On Thursday, Gareth Southgate names his first squad as England’s permanent manager, and Barkley will surely be included. His last competitive appearance for England came in October 2015 against Lithuania; what price a return from the cold against the same opponents?

If that is to be the case, Barkley should be rightly proud of his response, but he also owes his manager a thank you note. Koeman has inspired a run of form that has far more chance of being sustainable than ever before. Sometimes tough love is more effective than being drowned in compliments.

Eddie Howe
Howe has not managed to instigate a great deal of improvement in Bournemouth’s defence, but they continue to score goals freely. More than Manchester United in fact, albeit having played two games more. Another season of Premier League football secured?

Perhaps. Now six points above Hull City with ten games remaining, and with six clubs below them, Howe will know that two more wins effectively confirms survival for the second consecutive season. Bournemouth are still to face Swansea, Middlesbrough, Stoke and Burnley at home. Surely they’ll beat at least two of those 3-2, 4-3 or 5-4?

Jurgen Klopp
Our early winner, because failing to beat the worst away team in the country would have caused further scrutiny of Liverpool’s inability to conquer the Premier League’s supposed weaker clubs. It might have been “ugly”, even by Klopp’s own admission, but only the result was king. Liverpool have now gained 14 points from losing positions this season, the same as Arsenal and Manchester United combined.

Georginio Wijnaldum
Sixteen Premier League goals, and not a single one away from home. I don’t even know how you manage that.

Romelu Lukaku
Vital contribution in the first goal, assisted the second and scored the third. The top goalscorer in the Premier League also has more assists than Eden Hazard, has created more chances than Juan Mata, Dele Alli and Raheem Sterling and has completed more dribbles than Leroy Sane, Andros Townsend and Philippe Coutinho. Imagine if he wasn’t so lazy, eh?

Marco Silva
When Hull were defending their 2-1 lead in the last few minutes of their victory over Swansea and subsequently achieved it, I wonder if Matt Le Tissier leaned over to Paul Merson and whispered: “Looks like he can dig in like an Englishman, doesn’t it?”

Slaven Bilic
If he didn’t know it already, Bilic has a huge problem on his hands. West Ham may be in the relative safety of 11th place, but the performance at Bournemouth on Saturday was so poor that it provoked the club’s co-owner into public criticism. Eddie Howe’s team scored three times, but should have at least doubled that number. There was no defensive organisation from the Hammers, no obvious strategy, no physical presence in defence and no obvious protection offered by those in central midfield.

West Ham are a team who have been winding down since the season began, a squad that looks demotivated, whatever they may say to the contrary. If the seven-week run between mid-December and early February kept the relegation wolf from the door, West Ham have now kicked off their shoes, hung up their jackets and pulled up a comfortable chair.

“I was very disappointed and frustrated with the manner of our defeat at Bournemouth on Saturday,” David Sullivan said in a story published on the club’s official website, never a good sign.

“Slaven, the players and the staff all know we have to do better. We have conceded too many goals early in halves in recent games and, while we’ve managed to get ourselves back into games like the ones at Southampton and Watford and at home to West Brom, there will be matches where we cannot equalise.

“That situation cannot go on. I am sure that Slaven, his backroom staff and the team were not happy with what happened and they will think about it a lot over the next few days.”

There is a strong sense that Bilic, although not blameless, has been a little shafted in all of this, a victim of his initial success and his club’s difficult transition to a stadium few like and fewer still love. Finish in ninth – the gap to Stoke is three points – and Bilic will have achieved West Ham’s two highest league finishes over the last eight years in his first two seasons in charge. That’s despite the London Stadium fiasco and the loss of Dimitri Payet mid-season after the club broke promises on investment.

Yet Davids Sullivan and Gold may well make Bilic the fall guy for their own flaws. Don’t be too surprised if they pull the plug on this latest project come the end of the season. It’s what they do.

Swansea City
Dragged back into the mire, or a setback on the road to recovery? Only time and hindsight can help to answer that question, but Paul Clement will be irked at his team’s ability to rise to the big occasion and then let that accrued positivity go to waste. Next weekend’s trip to Bournemouth is sodding massive.

Tony Pulis
The first team in flip-flops? Or did Watford already take that award? There’s nothing quite like your team confirming their safety under Tony Pulis before losing 2-0 at home and 3-0 away to hammer home the ultimate futility of a mid-table slog. Doesn’t it make you feel warm inside, West Brom fans?

Aitor Karanka
Our early loser, less for the predictable FA Cup defeat and more for another scoreless match and Hull City’s victory over Swansea. When Middlesbrough beat the same team 3-0 at home on December 17, they moved up to 14th in the table and only five points off seventh. Now they’re 19th and sinking without so much as a whimper.