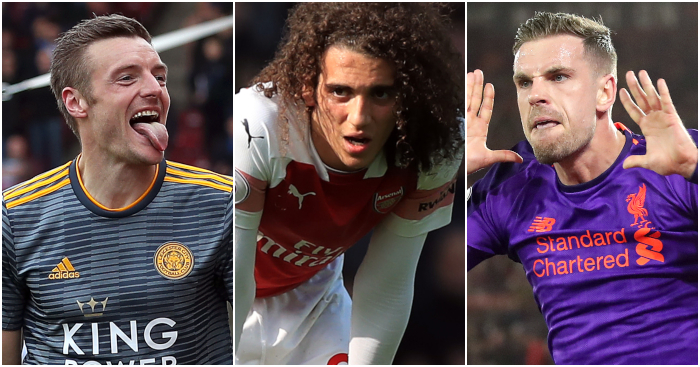 That could easily be viewed as a negative. City’s comfortable leads allow them to play at half-pace in the final 30 minutes, preserving energy for their assault on an unprecedented quadruple. Liverpool do not have that luxury. Against Southampton, as so often this year, they were forced to dig deep and fight until the end.

But Klopp might not mind. He would obviously prefer that Liverpool scored three early goals in each of their remaining games, but the doubts about Liverpool (particularly after the 2013/14 title race and Europa League and Champions League final defeats) surround their mettle, not their quality. The assumption is that this run-in will test Liverpool’s resolve like never before. Many are waiting for any misstep to pour scorn upon Klopp and his players.

In those circumstances, being severely tested and yet coming through each test unscathed proffers the message that there is no mental fragility to be exploited, and only boosts Liverpool’s belief that they can win every game between now and May. If even that isn’t enough to get past City, so be it.

Vardy’s brace at Huddersfield this weekend took him into the top 50 of all-time Premier League goalscorers. Considering that he didn’t make his debut in the competition until 2014 and was playing non-league football until the age of 25, that’s absolutely remarkable.

Burnley, safe again
Fair play to Sean Dyche. I wondered a fortnight ago whether Burnley’s manager could rally his troops to go again after four straight defeats had brought them right back into trouble, and wondered too whether Burnley could be more expansive in pursuit of that goal. They have promptly scored five times in two consecutive wins and are now virtually safe from relegation. If one of those wins came against a team with one eye on the FA Cup and the the other against a side playing in flip-flops, Dyche couldn’t care less.

As that slightly doom-mongering piece said, Dyche has become a victim of his own success. Burnley’s place in the Premier League – itself an overachievement – has become normalised. While other clubs increase their spending significantly as they extend their stay in the top flight, Burnley have resisted that temptation. They have still only signed nine players in their history for more than £5m, and have never spent more than £15m on one signing. The two who were signed for more than £5m last summer – Ben Gibson and Matej Vydra – have started only four Premier League games between them this season.

There are still valid questions about where Burnley go from here: Do they push on and embrace a new era or merely plough on doing the same thing and risk it going increasingly stale? But for now, you could forgive Dyche for sticking two fingers up at that particular issue. Burnley have survived top-flight relegation twice in the last 43 years and it’s about to become three. All three were under his stewardship.

Marco Silva
Legitimately considered to be three games from the sack a couple of months ago, after failing to land any blows on top-six teams and watching Everton slump into midtable. Now Silva has masterminded wins over Chelsea and Arsenal and a home draw against Liverpool, and Everton are playing with the fight that supporters demanded of them. Clouds have formed over Goodison at regular intervals this season; here’s the Silva lining.

The battle for seventh
Assuming Manchester City win the FA Cup final (and that would hardly be a shock), seventh in the Premier League will be guaranteed a Europa League qualifying place (no trophy?). Right now, seventh to tenth are separated by just one point. Most unusually, all four managers might actually appreciate that Europa League place rather than pretending to enjoy it before hastily engineering their club’s way out of the competition.

Mohamed Salah
It’s still not quite clicking as it was last season, but Salah would happily give up some individual magnificence for team glory. He certainly picked an excellent time to end the goal drought. The winner against his former club next weekend in Liverpool’s hardest remaining league fixture? Don’t bet against it.

Jordan Henderson
Captains step up in the big moments; Henderson did that. He came off the bench at 1-1, assisted Liverpool’s second goal and scored their third. And then the raucous screams of relief could begin.

This title victory will mean everything to every Liverpool player and member of staff, but it might mean most to Henderson. Not only is he Liverpool’s captain, he’s also one of few at Anfield who were present during their failed title bid of 2013/14. Of the 18 named in the squad to face Crystal Palace in that famous 3-3 draw, only Simon Mignolet and Daniel Sturridge remain at Liverpool.

Henderson is not a Scouser and did not grow up as a Liverpool fan. But he knows more than most what this title would mean, and he will push harder than most to make it happen.

Luka Milivojević (pen)
The record for the number of penalties scored in a Premier League season was set by Andrew Johnson. Now, another Palace player is threatening to break it. Milivojevic has already scored 1o of his 11, and has scored five penalties in his last nine league games.

Crystal Palace hardly make any secret of their tactic: Give the ball to Wilfried Zaha and let him dribble around the penalty area looking for a victim. When you dive in as rashly as Deandre Yedlin did on Saturday, you deserve to get punished.

Dominic Calvert-Lewin
A slightly odd thing to say about a player who is yet to receive a call-up to the senior squad, but England don’t really have anyone like Calvert-Lewin. He’s comfortable playing as a wide forward if he must, but he really thrives in the midst of a physical tussle. In that regard, he’s closer to Glenn Murray than Harry Kane.

With Bernard, Gylfi Sigurdsson and Richarlison providing plenty enough skill behind the striker, what Everton really need to complement them is a streetfighter. Cenk Tosun was supposed to be that, and it’s no surprise that Everton have been linked with a move for Aleksandar Mitrovic.

But in Calvert-Lewin, Marco Silva might just have a ready-made option. The way in which he simultaneously kept both Sokratis and Shkodran Mustafi busy enabled those behind him to find time and space and thus overpower Arsenal. Damn, England’s Under-21 squad is good, and damn, Aidy Boothroyd better look after them.

Crystal Palace’s away record
Still plenty of problems to solve if they’re to really kick on under Roy Hodgson, but the away form isn’t one of them. Palace have won 59% of their points away from home. The notion that Selhurst Park is a difficult place to go has been disproven, but Palace have made amends on the road.

James Maddison
Now the scorer of more direct free-kicks in the Premier League than any other player this season, two of which have come during Rodgers’ short spell in charge. He’s either going to sneak into England’s UEFA Nations League squad or rip it up at the Under-21 European Championship.

Bournemouth’s defending
After the defeat to Burnley on Saturday, Eddie Howe insisted that his team was not yet safe. That’s probably not true, but Howe was using it as motivation for his side. Bournemouth have tailed off badly since survival was ensured.

The performance and result against Burnley was terrible, but it was at least rare. Saturday was the first time that Bournemouth have lost at home in the league to a non-Big Six club since November 2017, also against Burnley.

But Howe has a problem to solve. In conceding three times, Bournemouth became only the second side in Premier League history to concede 60 or more goals in four consecutive seasons. Asmir Begovic has tailed off badly over the last year, but he is not the only issue. Howe must push for at least two new defenders this summer. Fail to do so, and they might be in a spot of bother next season.

Newcastle, not safe yet
A classic Championship Manager defeat, in which your team has chance after chance but then concedes the only goal of the game to one of your opponent’s few opportunities. Off goes the laptop and out you go out of the room, muttering something about Charles Babbage’s stupid bloody invention under your breath.

If Newcastle play like this between now and May, they will have plenty enough to stay in the Premier League. Unless Cardiff pull off a mini-miracle then they are already safe. But this is not the stage of the season to produce good performances that end in the square root of eff all.

Worse news came in the post-match interviews, with Rafa Benitez confirming to Sky Sports that he is not yet close to signing a new contract. This is all part of the brinkmanship that aims to ensure Benitez has significant funds to spend on his squad if he is to commit to this project, but it will worry supporters.

Still, the good news is that Newcastle only face one more team from London this season, and that’s a rotten Fulham team. Benitez’s team have not won any of their last 11 matches against clubs from the capital, losing nine of them. Bloody Cockney mafia doing them over again.

Arsenal’s away form
Arsenal are still odds-on to finish in the top four, but a weekend on which Manchester United and Tottenham didn’t play and Chelsea don’t play until Monday evening offered them a wonderful chance to put one foot in next season’s Champions League. Unai Emery has improved more than some Arsenal supporters give him credit for, but their propensity to trip up at the least opportune moment remains.

A few more things for Emery to mull over: Arsenal have taken fewer away points than Watford, Leicester City, Wolves and Crystal Palace this season. If the home record is supreme, they remain a mid-table team on the road. Worse still, Arsenal are the only team in the Premier League yet to keep a clean sheet away from home.

Sunday’s was a shonky, shoddy performance. Alexandre Lacazette toiled without Pierre-Emerick Aubameyang, Henrikh Mkhitaryan reiterated his reputation as one of the most frustrating players in the league, the midfield press looked half-arsed without Lucas Torreira and the defence was frequently calamitous. When you watch Arsenal defend so shambolically that conceding becomes an inevitability, you wonder why Emery doesn’t just pick all three of Aubameyang, Lacazette and Ozil from the start and try and overwhelm their opposition.

Arsenal now face three fixtures that will help to define their season, however impressive some of Emery’s work has been to date. Beat Napoli over two legs and their chances of Europa League success increase dramatically. Beat Watford away in between and the wrongs of Goodison will have been righted. But tumble out of the Europa and lose at Vicarage Road (to Troy Deeney’s cojones, no less), and an entire campaign takes on a different slant.

Shkodran Mustafi
It’s not nice to pick on people, but Mustafi is still the 11th most expensive defender in the game’s history. And he’s awful. I don’t just mean ‘oh look he’s made another mistake’ awful. I mean ‘oh look he’s actually done something with a degree of competence, who would have thought it’ awful. The best central defenders instil confidence in those around him. Mustafi does the opposite.

Worse news for Arsenal is that Sokratis was booked at Goodison, meaning that he will be suspended for the next two league games. That makes Mustafi certain to start in both, and reiterates why Arsenal badly need a central defender this summer. Let’s make this a good one, eh.

Huddersfield Town
I’m not quite sure what to say anymore. Everyone must be desperate for this season to be over, but none more so than Jan Siewert. Every defeat just makes his summer task harder.