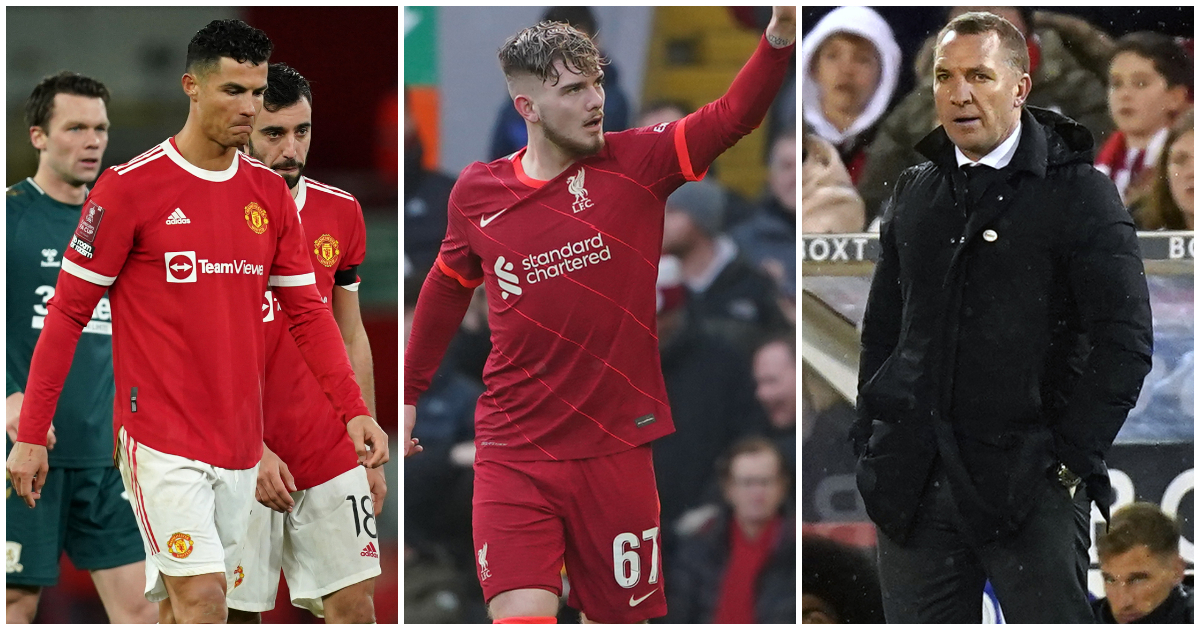 Harvey Elliott
Forget the supposed romance or magic of the competition, this was the feelgood factor of the FA Cup. Elliott’s ankle injury at Leeds in September seemed one of the season’s cruellest moments; a promising player was unfairly cut down when he appeared to be flowering. Go back then and it seemed implausible he would be back within five months. That his comeback was capped with a goal made it more special. That it was such a good goal bordered on the unrealistic; no wonder Jurgen Klopp called it a fairytale or that the winger’s father was in tears. His half-volley on the turn was preceded by a lovely first touch. A goal 18 minutes into his return came on what felt an auspicious occasion. Luis Diaz marked his debut with an assist. Diogo Jota maintained his fine form with the opener. In Elliott, Diaz and Jota, Liverpool may have their successors to Mohamed Salah, Sadio Mane and Roberto Firmino.

Liverpool could yet follow fine January with domestic Cup double

Kepa Arrizabalaga, penalty specialist
The abiding image of Arrizabalaga’s Chelsea career revolved around penalties. He was, infamously, the goalkeeper who refused to be substituted ahead of the shootout against Manchester City in the 2019 Carabao Cup final. Three years on, there could be another slant on his actions: while the world’s most expensive goalkeeper undoubtedly adopted the wrong approach, he was right to have faith in his own ability to stop spot kicks. Chelsea can be grateful in three competitions this season: Thomas Tuchel brought Arrizabalaga on for Edouard Mendy for the Super Cup shootout against Villarreal and he secured Chelsea silverware. He reprised those heroics after the Carabao Cup draw with Aston Villa; if Chelsea win the trophy it will be in part because of him. Now his extra-time save from Ryan Hardie’s spot kick spared Chelsea another shootout and denied Plymouth the chance of an upset. And if it was a poor penalty, perhaps Arrizabalaga’s reputation is starting to precede him – in the right way, this time – and he can intimidate opponents.

Chelsea’s goalscoring full-backs
Go back to autumn and Chelsea’s full-backs seemed more potent than many of their wingers. On a day when six of their seven elite forwards took the field at some stage, two defenders bailed them out against Plymouth. Cesar Azpilicueta’s flicked finish with the inside of his heel was a reminder of how skilful and adaptable the captain is. Marcos Alonso’s first goal since August ended an unusually long drought. If there has been a sense Chelsea have missed the injured Reece James and Ben Chilwell in recent weeks, the elder statesmen compensated.

Harry Kane and Antonio Conte
Conte spent his post-match interviews interjecting observations that Kane is his “No. 9”. If it was a reminder the striker used to be more scorer than playmaker, the tap-in for Tottenham’s third goal against Brighton was a poacher’s finish and the product of a presence in the box. The curler for their first was a sign he is capable of much more. The references to his striker’s attitude and commitment could be used to form a contrast with at least some of the four players Conte exiled in January. If he has been quick to decide on those he doesn’t want, his relationship with a rejuvenated Kane looks better. Take away Spurs’ unhappy trilogy against Chelsea, when Kane was largely starved of service, and he has six goals in his last six games.

Serene progress one of many positives for Conte and Spurs…

Frank Lampard
Admittedly, Rafa Benitez also won his first game as Everton manager and in a manner that reflected well on the new presence in the dugout so it may mean little that Lampard followed suit. Nevertheless, beating Brentford 4-1 was an encouraging start. A club who had not scored four goals in a game for 360 days rediscovered some potency. The last goal came from a combination of three substitutes, underlining the sense Lampard made an immediate impact. He had talked about giving Evertonians more excitement and attacking football and obliged. He wanted them to have more possession and a 55% share was 15% higher than their average in the Premier League. Throw in a new formation – 3-4-3 – and it showed a decisiveness that worked; on Saturday, anyway.

Declan Rice
David Moyes had described Rice as the best midfielder in Europe. Such lofty claims cannot be justified against Kidderminster but Rice’s embarrassment-averting goal nevertheless highlighted reasons for his rise to a point where such suggestions can be made. There was the driving run from the half-way, something he has added to his game in the last 18 months, and the unerringly accurate finish. More importantly, there was the timing, in injury-time. It was reminiscent of Bryan Robson or Steven Gerrard, all-action midfielders who could alter a game through a combination of ability and force of personality.

Jack Grealish
It still ranks as an underwhelming debut season, with England’s most expensive footballer often overshadowed by his team-mates. And, as Fulham were seen off, Kevin de Bruyne got two assists, the second with a magnificent pass, and Riyad Mahrez set up one goal and scored two. Yet Grealish’s part in his first seemed the kind of dynamic contribution that many expected to see from him more frequently in a City shirt, an irresistible solo run through a throng of defenders before Joe Bryan brought him down and Mahrez converted the spot kick. At Villa, Grealish tended to be the most fouled player in the division. When that ball-carrying ability brings fouls in the box, it is especially valuable.

Norwich City
Four wins in 2022, which is four more than Arsenal.

Stuart Armstrong
The last time anything involving an Armstrong took flight in such spectacular fashion, man first walked on the moon.

Harry Maguire, shootout specialist
He may be a better penalty taker than he is a centre-back right now, but he is seriously good from 12 yards.

Manchester United
And so, unless the serial underachievers who are invariably less than the sum of their expensive parts somehow, inexplicably, win the Champions League, Manchester United will end a fifth consecutive season without a trophy.

If Anthony Elanga’s skied penalty against Middlesbrough provided another of the pictures of their campaign – and prompted questions if it was higher than Bruno Fernandes’ spot-kick against Aston Villa – a seventh defeat in eight shootouts felt another indication of the wastefulness of the modern-day United. Even on a night when they scored seven terrific penalties, Cristiano Ronaldo’s inability to hit the target in the first half proved more decisive. A man with more than 800 goals in his career has none in four games in 2022.

There was something very United about how even when they seemed to be making progress, they instead regressed. Propelled by Paul Pogba, they flourished in the first half but again looked incapable of excelling for 90 minutes, let alone the 120 they endured. They ran out of ideas. Perhaps the club who seemed to have far too many attacking options to know what to do with them all ran out of forwards.

Man United have only themselves to blame for FA Cup exit

Ralf Rangnick’s decisions to give Edinson Cavani and Jesse Lingard time off – which he said they requested and which the England international disputed – backfired. The Uruguayan can be both ultra-committed on the pitch and capable of absenting himself from Old Trafford. Rangnick could have done with both to inject quality and energy when United lost their way. Instead, Jadon Sancho stayed on for a few minutes after he seemingly needed ready to come off. Ronaldo played 120 minutes on the eve of his 37th birthday. The forgotten man Juan Mata came on. United scored one goal in two hours at home against a Championship club with a goalkeeper who looked decidedly fallible.

It amounted to a wretched night for Rangnick. His United are not as chaotic as Ole Gunnar Solskjaer’s but they remain underwhelming. An anglophile who cherishes memories of seeing Trevor Brooking score the winner in the 1980 FA Cup final won’t get to witness his team lifting the silverware at Wembley.

Brendan Rodgers
Last season’s FA Cup run ended in glory at Wembley. This year’s finished in ignominy in Nottingham. Conceding four goals to a Championship side highlighted the defensive difficulties that have been a recurring theme for Leicester this season. Daniel Amartey’s dreadful backpass, gifting Brennan Johnson Nottingham Forest their second goal 24 seconds after the restart from the first, took on a symbolic feel, though it was equally typical that Leicester conceded from yet another corner for Joe Worrall’s third. Injuries and instability only partially explain City’s problems at the back this season: it might have been different if Wesley Fofana had been fit all season but the disorganisation reflects badly on Rodgers. The Northern Irishman criticised the hunger, mentality and attitude of his team. And if they were valid points, given the number of players who are underachieving this year, it nevertheless raised questions if he is trying to deflect blame when he is culpable in a season that is going horribly wrong. Because whereas the last two campaigns have gone down to the final day, and one brought the FA Cup, this feels in effect over at the start of February, with only the Europa Conference League and a top-half finish to play for.

Wolves
Even if Wolves don’t qualify for the Champions League, they could record their highest league finish since 1980; maybe even since 1973. So it might be harsh to be too critical. But for a club with no trophy in four decades and a team who won’t go down, a home defeat to Norwich felt like an opportunity missed.

West Ham
Winners but also losers, twice rescued by very late goals against a Kidderminster team 113 places below them. A good day for Declan Rice and Jarrod Bowen was a bad one for many another, from Alphonse Areola, colliding with Issa Diop and spilling Amari Sterling-James’ cross for Alex Penny’s opener, to Alex Kral and Mark Noble, hauled off after failing to exert enough of an influence in midfield, to Andriy Yarmolenko, for a rather desperate dive in the box. After an underwhelming transfer window, when they failed to sign anyone, this was not a game to suggest they did not need reinforcements. Rather, it underlined that they rely on a small core including Rice, Bowen and Michail Antonio.

Burnley, Watford and everyone who watched it
Yes, Roy Hodgson Roy Hodgsoned his way to a debut clean sheet, becoming the first Watford manager to muster a Premier League shutout since Nigel Pearson in February 2020. Yes, neither lost a six-pointer and each, technically, has something to build on. Watford can argue it was a worse result for Burnley, the home side and a club stuck on a solitary win this season. But this was mutually assured destruction. Or maybe mutually assured dullness. Two teams with pass completion rates in the sixties, showing a lack of imagination in their unimaginative 4-4-2 formations. Hodgson got drenched in the Lancashire rain and almost blown away in a Turf Moor wind tunnel while doing a post-match interview. Retirement surely must be more fun.