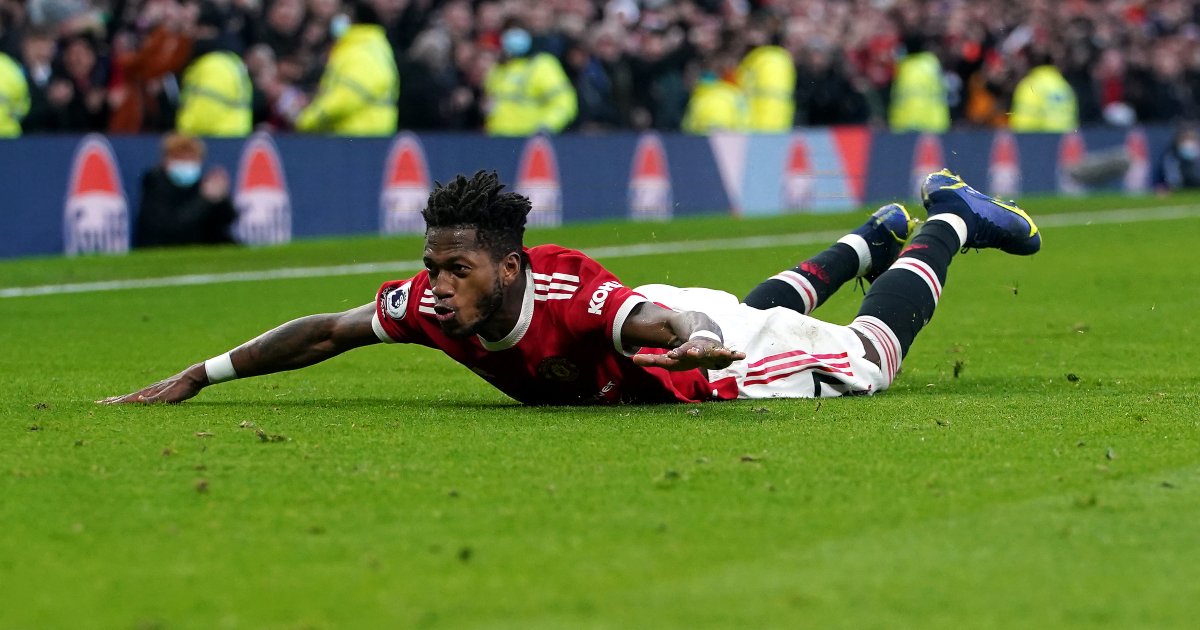 Fred tops the Premier League winners and losers. FRED. It was a great weekend for him but not so much for Edouard Mendy.

Fred
It may sum up Manchester United’s season that it has seemed to revolve around Cristiano Ronaldo and Fred, one a superstar and the other a footballer whose name contrives to feel both mundane and faintly ridiculous, and whose performances sometimes do too. If defensive midfielders can be efficiently dull, Fred has been an agent of chaos at times. Even by his accident-prone standards, it seemed ludicrous when he contrived to tread on David de Gea, leaving the goalkeeper lying on his line and facing in the wrong direction when Emile Smith Rowe opened the scoring for Arsenal on Thursday. And yet Fred’s night was a triumph. He also won the ball for both goals against Villarreal, though the abiding memory of Carrick’s caretaker stint might be of his failed attempt to chip Edouard Mendy at Stamford Bridge.

As the most enthusiastic presser among United’s central midfielders, Fred may be the most-maligned figure who appeared likely to start for Ralf Rangnick. He did and scored the first goal of United’s latest new era (if interim regimes qualify as an era). It had Rangnick joking that he didn’t know Fred could shoot with his right foot. But he also made seven tackles, the most of anyone in victory over Crystal Palace, and Rangnick knew he could do that. This may be the weird age of Fred, but it certainly isn’t over.

Jarrod Bowen
Bowen was the Neal Maupay of West Ham, the expected goals underachiever who could trouble defenders but mar his fine work with an inability to finish. Until, like Maupay three days earlier, he scored a glorious goal at the London Stadium. If the Hammers winger’s effort was less spectacular, it was still terrific. He has been linked with Liverpool and whenever a left-footer cuts in from the right to curl in a shot with his favoured foot, there can be hints of Mohamed Salah. More pertinently, he relieved the burden on Michail Antonio. The striker’s goals have dried up but, as Antonio is at his best, Bowen was irrepressible as West Ham defeated the league leaders Chelsea. If a quintessential David Moyes signing is a success story for a manager who has long liked to raid the Championship, he is also a reminder that Steve Bruce, who signed him from Hereford for Hull for £50,000, has found many a bargain in his time.

Newcastle United
They won a game, completing a full set of 92 Premier and Football League clubs who have tasted victory this season. That it took until December and after a takeover that meant Newcastle can be called the world’s richest club added a surreal element. More practically, a return of four points from six against relegation rivals now feels encouraging, considering Ciaran Clark reduced Newcastle to 10 men after nine minutes, and at least gives the chance to kick-start a revival. Saturday’s victory against Burnley means Newcastle have two clean sheets in all competitions this season: both against the Clarets. That it came courtesy of Callum Wilson, one of Eddie Howe’s finest signings for Bournemouth, may have an added importance. Wilson looks the most potent scorer in the relegation battle. And if it made it a fine weekend for another Bruce buy, perhaps the more surprising, and encouraging, development for Newcastle is Joelinton’s strange transformation into a talismanic figure for Howe.

Divock Origi
As Jurgen Klopp reflected, Liverpool have not needed too many late winners this season. But when they did, there was something timeless in the way it came from Origi. Few have been a super-sub at Anfield more often without gravitating to the role of regular starter. And on a day when Diogo Jota specialised in missing chances, Origi scored in style at Wolves. It is a moot point if his first touch or his second was better. Either way, it amounted to quite an impact.

Bernardo Silva
Pep Guardiola never judges players purely on the basis of their goal tally. It seems far too simplistic for him. But let’s do the opposite of what Pep would do, if only for a minute. Only Mohamed Salah, Diogo Jota and Jamie Vardy have more Premier League goals than Bernardo Silva. Five have come in his last five games. One, at Aston Villa, was an astonishingly good volley. His second strike at Watford was wonderfully classy. He has three goals in a week, whereas relatively recently he had three in 51 Premier League games. Now only Hwang Hee-Chan can rival his chance conversion rate in the division; all of which would be impressive even without the rest of the package Silva brings, and which Guardiola values rather more: the selfless, incessant running, the versatility and tactical awareness, the creativity. Guardiola suggested on Wednesday that Silva is the division’s best player on current form. And if that suggested he had not watched much of Salah, Silva’s display at Watford otherwise supported his manager’s case. Take Salah out of the equation and the Portuguese would be the player of the season so far.

Emi Martinez
A truly stunning save from Harvey Barnes’ header preserved Aston Villa’s lead as they registered a third win in four games under Steven Gerrard. Thanks to Martinez, Villa had the highest save percentage in the Premier League last season. When Dean Smith was sacked, they had the lowest. This was a sign Martinez is returning to his finest form. And as Lionel Messi, a man with plenty of experience of beating goalkeepers, described him as one of the world’s best, that is very good indeed.

Lucas Moura
Perhaps it says something about Antonio Conte’s demanding nature that he could see a goal-of-the-season contender, a virtuoso effort that was both mesmeric dribble and spectacular long-range shot, and turn his attention from quality to quantity. Perhaps, though, he had a point. Moura’s magnificent opener against Norwich was his first league goal since February. With Harry Kane not scoring, with Conte only fielding three attackers, it is imperative the Brazilian gets more. He looks a Conte player and the Italian has selected him from the off, but perhaps after ending a drought in remarkable fashion, he will score more forgettable goals.

Wolves’ defence
A doomed rearguard action can still be heroic and if Origi’s injury-time goal ensured Wolves’ efforts were in vain, they should still savour memories of a backs-to-the-wall effort. Conor Coady, Romain Saiss, Leander Dendoncker and Jose Sa all made goal-saving interventions. Wolves were seconds away from a third consecutive clean sheet. And while they were denied at the death, they showed why only the top three have conceded fewer goals.

Patrick Bamford
His ankle kept him out for 11 games. His knee brought a goal on his comeback.

Edouard Mendy
Perhaps it is the curse of the runner-up spot in the Yashin Trophy. Named the world’s second best goalkeeper in 2021 a few days earlier, consistently the best in his position in the Premier League this season, Mendy had that rarest of things at West Ham: a bad game as Chelsea lost 3-2.

Or maybe it is the curse the London Stadium puts on otherwise outstanding goalkeepers. Alisson was arguably at fault for three goals when Liverpool lost to West Ham. Mendy was only culpable for two, conceding a penalty after Jorginho’s wretched back pass; for the second successive weekend, the Italy international was more Ballon d’Oh than Ballon d’Or as his unusually poor touches cost Chelsea goals. Then came Arthur Masuaku’s bizarre winner. It was more cross than shot. If it was entirely understandable Mendy’s weight was on his left foot, ready to go to his far post, he still felt at fault as the ball went in at his near post.

Diogo Jota
It turns out that it is harder to score when there is no goalkeeper in the goal. Or it was for Jota, anyway, when the scourge of many a keeper instead picked out Conor Coady’s thighs with his shot when Jose Sa had gone walkabout. Besides being a strange way to mark his 25th birthday, it felt a particularly egregious miss: Jota had time to dribble in the box and to pick his shot and, by hitting the ball so hard, he ensured the rebound did not fall to Mohamed Salah. At least Origi ensured it was not a costly mistake.

Brendan Rodgers
Master lost to apprentice as Rodgers was defeated by his former captain. Yet if Steven Gerrard’s presence in the opposite dugout prompted thoughts of their time together at Liverpool, so did Leicester’s defending. For the eighth time in 10 games, they conceded at least twice. Ezri Konsa’s brace took the total of set-piece goals Leicester have conceded this season to nine: rewind a few years and Martin Skrtel spent his time trying to look tough while failing to mark anyone as Liverpool conceded to a host of corners and free-kicks. Now Emi Buendia had a free header for Aston Villa’s first goal in their 2-1 win and Caglar Soyuncu did not get close enough to Konsa for the second. It speaks to a broader problem of a lack of organisation and while injuries account for an ever-changing cast list at the back for Leicester, they have the personnel to do better. They have the division’s fourth-worst defensive record and that reflects badly on the manager.

Burnley
There has been something rather unBurnley about Burnley this season, whether it has been Maxwell Cornet’s burgeoning collection of spectacular goals or their capacity to play well in draws without grinding out 1-0 wins. That uncharacteristic lack of ruthlessness looks more damaging now with defeat to Newcastle leaving them level with their conquerors and with a solitary league victory this season. It was compounded by the loss of Cornet with a thigh injury Sean Dyche understandably described as a big blow. Burnley’s great entertainer has also mean the source of many of their goals. Without him, the prognosis may be bleak.

Danny Rose
There is something cruel about seeing a fine player in evident decline. Manchester City are the sort of side who can highlight frailties. Sadly for Rose, his shortcomings were readily apparent as he mustered a hat-trick of sorts. He was miles out of position when Raheem Sterling, his immediate opponent, scored City’s first goal. He was nowhere to be found when Bernardo Silva added the second, from a similar zone, albeit largely because he had fouled Jack Grealish on the half-way line, collecting a caution in the process. For the third, Silva’s lovely curler, he stood off the Portuguese, seemingly lacking the confidence to close him down on a day when he seemed to be huffing and puffing in distant pursuit of City players. Think back to his peak under Mauricio Pochettino and the running power Rose had then and the difference is damning.

Jack Grealish’s finishing
Five shots, no goal. Grealish had an expected goals of 1.19 at Vicarage Road on his own. But while he still has a solitary league goal for Manchester City, the encouraging element was that this was his best performance as a false nine. As that shot count indicates, he has never been as prominent in the central role. But the previous occupant of City’s No. 10 shirt tended to be more clinical.

Southampton, when they have a lead
Neal Maupay’s late equaliser means Saints have dropped 71 points from losing positions under Ralph Hasenhuttl. Four have come in their last two games, seven in their last four. Southampton can imagine what the league table would look like if they could hold on to a lead.