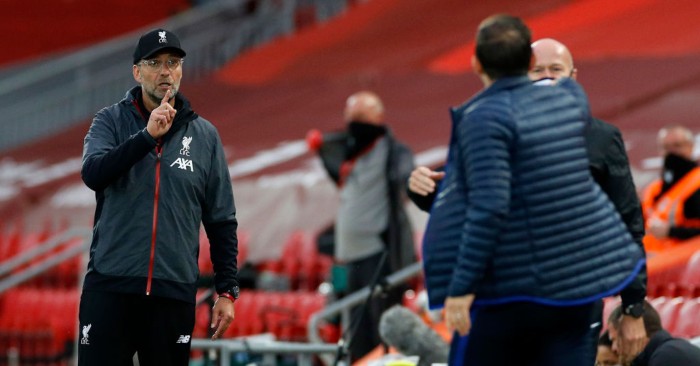 Liverpool, Aston Villa and Eric Dier are midweek Premier League winners. Arsenal, Chelsea and Manchester United? Not so much.

Liverpool
Quite literally. Despite the wild David Brent “could be a washout” energy of those purporting to profess genuine concern that a supporterless trophy lift would diminish the moment, in years to come it really, really won’t. Nor, in the fullness of time, would lifting the trophy after a defeat. But doing so after a freewheeling festival of attacking football and a 5-3 win over a team nominally among your potential future rivals is definitely better. Well done, everyone.

In time, Liverpool will have to regroup and refocus on how to do all this again for a third season. Manchester City’s ups and downs this year show how tough that is, and there is every chance Liverpool will go into a 2020/21 season that will be here before we know it with largely the same tools at their disposal as this year.

But that can wait. For now, it’s time to enjoy the party. Even if the guestlist was a bit short.

Aston Villa
Out of the bottom three for the first time since February with perfect timing. Having secured more points in their last three games than the preceding 13, a result against a now-safe West Ham on Sunday should do the trick. Sad news for those of us hoping this would be a winner-takes-all claret-and-blue death match, but good news for fans of both clubs.

Brighton
Safety secured. Over to Winty for the correct assessment of the direction of travel at a club a lot of people are still very mad at for sacking an admittedly lovely human.

West Ham
Less bad than at least four other teams. Mainly because of…

Michail Antonio
The player of Project Restart? Pretty much has to be given the scale and significance of his individual contribution and just how unexpected it has been. Forced into an unfamiliar number nine role by Sebastien Haller’s absence, Antonio had already put in a decent, thankless, unsupported shift in a 2-0 defeat at Spurs before the goals and points started rolling in. It’s now eight goals in six games since that game and – however reductive it may be – that’s more than Haller has managed all season.

Raheem Sterling
Remember when he hadn’t scored in the whole of 2020 which admittedly did always sound worse than it actually was what with the rona and all but did amount to a 12-game drought? It’s now eight goals in eight Premier League games during Project Restart.

Eric Dier
Tottenham have decisively and unarguably improved during his ban for running into the stands after the FA Cup game against Norwich – an event that now feels not just ancient history but from quite literally another timeline – yet there remains an unshakeable sense that not only does Jose Mourinho trust him more than most of his team-mates, but also Dier instinctively gets Mourinho. His new deal this week pretty much brings to an end the long-running saga of the soon-to-end Spurs contracts. Eriksen left; Vertonghen will leave; Alderweireld and Dier stay. It’s probably not a bad result for Spurs, all round.

Manchester United
We called them tired yesterday and got some potty-mouthed but accurate fan mail. It was also fair to call them tired, though. They are tired. Solskjaer has done plenty right since the restart and given that they finish the season against a Leicester side no longer entirely sure what sport it is they’re even playing, United should still finish in the top four and that really is all that matters. That was the goal at the start of June and United will surely achieve it now.

But there’s no doubt that they have slightly fallen off since the Villa game. Plenty of sides have carried momentum from one season into the next recently – for good (Liverpool, Leicester (x2)) and bad (Tottenham, Huddersfield, Watford) – and United may have passed up the opportunity to do so here. Might mean nothing, might mean everything.

Paul Pogba
First he went around the place with haircuts, now he insists on having arms. Is there no end to this wastrel’s absolute nonsense? According to Harry Maguire, Pogba even held his hands up in the dressing room afterwards. FFS. Will he never learn?

Watford
Back in the bottom three at the worst possible time after a couple of potentially catastrophic goal-difference-mangling defeats to West Ham and Manchester City.

Even if they’d only lost their two games against Manchester City this season 7-0 and 3-0 they would now be outside the bottom three. They should definitely have at least considered doing that.

Now instead they must hope that their opponents on Sunday are as distracted and helpful to a team scrapping for their lives as they were this week. Speaking of which…

Arsenal
Beat Liverpool. Beat Manchester City. Lose to Aston Villa. Slightly wordier than ‘two steps forward, one step back’ but tells the same story just as eloquently. Another reminder that Mikel Arteta’s Emirates project is undoubtedly a long-term one that has plenty more bumps in the road ahead yet.

Arsenal can say with some justification that the Villa game was of minimal consequence, that the road to Europe via the league was already too difficult to negotiate. But to dismiss this game so readily means the Liverpool win must go the same way.

Yes, the FA Cup final is demonstrably now Arsenal’s season-defining fixture, but it would surely be better to approach it on the back of four straight wins and full of confident swagger than beset once again by doubt and uncertainty. Ultimately, we – and apparently they – can still never be certain which Arsenal will turn up on any given day. There are many reasons for optimism under Arteta, but another cup final defeat to Chelsea will leave the Gunners short of any tangible, measurable progress to show for it.

Chelsea
All good clean fun at Anfield, where Chelsea got right into the party spirit and fair play to them for that. They have, though, conspired to create a scenario where things could easily now go all bollocks up on the final day.

Defeat to a very decent Wolves side who themselves need a win to guarantee Europa League football, coupled with the wrong result between Leicester and Manchester United, would see Chelsea miss out on the top four.

While all the focus has been on Leicester’s dramatic tumble from second, Chelsea missing out on the Champions League would be almost as seismic. Sure, they never had the cushion Leicester once did, but they have been in the top four since matchweek nine with a buffer over fifth that has at times stretched out to seven points. It would be tremendously careless to lose it all on the final day, with last night’s daft Championship finale a stark reminder of just how quickly and easily such silliness can occur.