Home Brighton Manchester United: top of the league, top of winners and losers 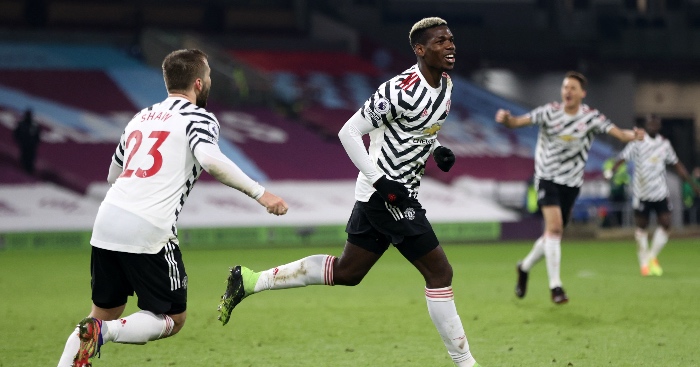 Manchester United
Are they good? Are they? Truly, are they any good? I don’t know. Nobody does. What we do know, after another hard-fought ground-out victory against troublesome opponents, is that they are plenty good enough to win this league this season. How much that means or is worth is up to you, but what an extraordinary thing it would be for Ole Gunnar Solskjaer.

And it’s already undeniable that he has built more of a team than any of the garlanded managers or David Moyeseseseses to have stumbled through Old Trafford since Fergie switched on his final hairdryer. Sunday’s game is beyond huge, and right now there’s a very decent case that United are the favourites. They’re certainly the team in form.

Marcus Rashford
Just another normal week for the national treasure. Humiliating the government by day, setting up winning goals to send his team top of the Premier League by night. He plays the former role so utterly, flawlessly perfectly – never rude, never aggressive, never claiming knowledge he doesn’t possess and, most importantly of all, never making it overtly party political and divisive – that the right-wing press now hate him so very, very much and have so very, very little to go at that they have to pick on him for misplacing a couple of passes in what used to be his primary job. The best human being in the country is a professional footballer, which is both marvellous and utterly terrifying really when you think about it.

Paul Pogba
Still at United, just about. Might as well all make the best of it.

Sheffield United
Quite literally winners for the first time in the Premier League for about 427 years if we measure it in Covid time. Deservedly so, and with wonderful echoes of that memorable Derby side by beating Newcastle. Might have had absolutely nothing to do with it, but on the face of it, further evidence that getting a win in the cup can do far more for confidence and momentum than the benefits of any extra rest you get from elimination, even in this daftest of seasons.

Real chance to build on this now, with Spurs the weekend’s visitors to Bramall Lane for a 1-1 draw.

Manchester City
Looked leggy and tired against Brighton, but everyone is going to look leggy and tired somewhere along the way this season. Got the job done and, this year more than ever, that really is all that matters.

Phil Foden
Increasingly influential even if not yet a Manchester City regular. Lovely and vital goal to see off Brighton and keep City firmly in this curious title race and it was a goal that once again highlighted the dizzying mix of attributes he possesses. There really are few young players around with his ability on the ball, cool decision-making, tenacity and positional intelligence. Obviously being excited about Foden is not a new phenomenon but there’s a definite shift occurring in front of our eyes from ‘huge rich promise’ to ‘actually a brilliant footballer here and now’. It’s very, very exciting.

Everton
A big win at Wolves. First because even though Wolves are struggling a little, any win there is a very decent result.

But also because Everton have been a bizarrely streaky team this season. Streak of wins at the start of the season. Then a streak of defeats. Then another streak of wins. After a disappointing home defeat to West Ham on New Year’s Day, it would have been easy to fear another bad streak was on the cards, especially with a tricky run of games coming up with Villa (although now not Villa), Leicester, Leeds and Manchester United all scheduled within the next five games.

Scott Parker
His initial response to being handed a game at 48 hours’ notice might have been over the top given the wider context, but football has never been great at seeing a bigger picture or wider world. Judge him instead on the exemplary tactics, endeavour and application of his team in securing a fully deserved point at Spurs under trying circumstances.

Something is happening at Fulham, who now have five draws and a win at Leicester within their last seven Premier League games. From looking like one of the worst ever Premier League sides in September, it’s quite something. Could reasonably look back on Wednesday night’s game mildly annoyed to have got only one point.

Ademola Lookman
Superb from the bench as Fulham got a fully deserved point at a fully silly Spurs.

The empty futility of Tottenham taking a half-time lead
Spurs have now won precisely half of the 10 Premier League games they have led at half-time this season. Statistically, they are just as likely to win if they are drawing at half-time (three out of six).

Spurs have led 1-0 at half-time in six Premier League games this season. Four of those games have finished 1-1, and in the fifth Spurs conceded an equaliser before finding a winner. At some point you have to accept it just isn’t working.

Obviously you can’t just whack on the 10 points Spurs have thrown away – and they really have been thrown away – from winning positions and think about how the table would look. Every team has points that got away that they’d like to add on, everyone – Spurs very much included – has also nicked wins they didn’t necessarily deserve. But that doesn’t mean it’s not hugely tempting and… bloody hell.

Jose Mourinho
Mourinho before the Marine game: “When we lose matches in the Premier League, it’s my fault, but if we lose this match today, it’s not my fault, it’s their fault.”

Never change, Jose. And you know what? He never will. He’s going to stick with this wrongheaded plan that his players are entirely ill-equipped for until they do finally manage to hold on for a 1-0 win over a bottom-half side after a Steven Bergwijn goal in the 17th minute and claim it as vindication. That this momentous match will happen sometime in April and lift Spurs back up to eighth in the table is neither here nor there.

Followed, inevitably, by Mike Ashley coming out and backing Steve Bruce because apparently Newcastle fans have done something truly appalling that means they must deserve this endless torrent of sh*t forever and ever and ever and ever.

Brighton
Played pretty well at Manchester City. On another day, might have snuck away with a point. But it’s less their own efforts that get them in the losers section this week than Fulham’s. The Cottagers were so good at Spurs, and Brighton are now just two points clear having played two games more. A worry.

They’re not in trouble yet by any stretch, but Wolves fit the profile of a team to get sucked in. Paul Merson is readying his moccasins. They’ve tried something different this season, admirably, but it’s not quite working. Defeat to Everton makes it five points from their last eight games and puts a bit of unwanted pressure on Saturday’s clash with the Baggies.