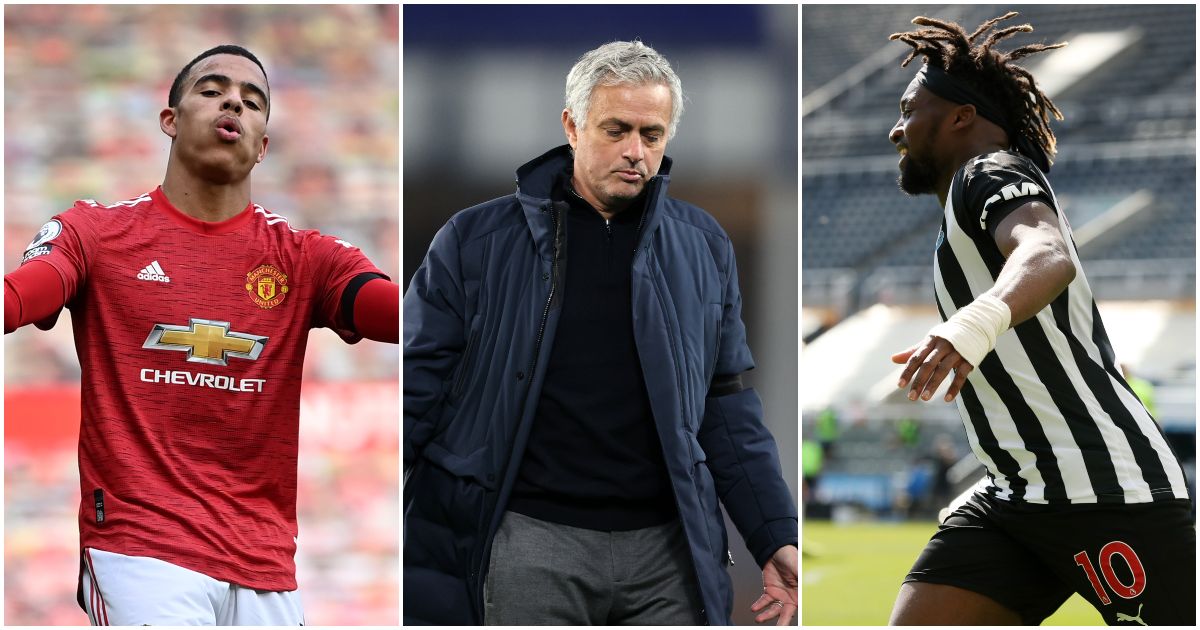 Newcastle United and Steve Bruce
And breathe. This has not been an easy or enjoyable season to be a Newcastle United supporter on just about every level. It has come laced with bitterness towards a manager who they believe personifies the club’s self-imposed limitations and too often has failed to even match up to those. Even the win came with its own rotten period, 30 minutes during which Newcastle barely had a kick at home to ten men.

But Newcastle did win and Newcastle will survive relegation. Following the defeat against Brighton, everything took on a greyer, more miserable hue than usual. Bruce and his team have secured seven points from three matches since, giving credence to his insistence that the players had never given up the faith in him or each other. Newcastle have been helped by Fulham’s own survival bid never really getting off the ground, but they saved themselves.

It’s hard to know what happens next, and it would be remiss to paint this as an opportunity for the sunshine to pour back into St James’. The takeover saga continues to drag on, to the pleasure of absolutely nobody given the glacial speed of its progress and the identity of those looking to purchase. Bruce staying would not be seen as a positive development for the majority of fans, but he’s as likely to get a new contract as he is to leave in June or July. Staying up should never be a cause for celebration, only relief that the club at at least veered away from rock bottom.

But this weekend has at least proved that Newcastle are far better when they proactively try and attack their opponents. They have scored three or more goals in three league games this season, and in each one – Burnley, Southampton and West Ham at home – they have enjoyed a period where they played on the front foot and looked to keep the ball.

This squad does have the hallmarks of a counter-attacking side: Excellent goalkeepers, lots of defenders, two attacking midfielders in Miguel Almiron and Allan Saint-Maximin who delight in driving into space. But it just hasn’t worked – they are too flimsy defensively to invite teams onto them and Almiron and Saint-Maximin (who hasn’t always been fit anyway) end up having to beat three players just to create a chance.

But credit to Bruce for eventually spotting that and changing Newcastle’s approach when the emergency situation might have provoked further risk aversion. In their last three league games, Newcastle have had 14% of all their shots for the season and in doing so have scored 20% of their league goals.

Joe Willock
He’s Newcastle’s third top goalscorer from open play in the league this season and he’s played 612 minutes. I’m not quite sure why Willock hasn’t started a Premier League match since March 20 when Jonjo Shelvey continues to play every week, but that should now change. His goals have earned Newcastle three precious points against Tottenham and West Ham; Willock has done more than most to keep Newcastle up.

Gylfi Sigurdsson
Six goals from 33 shot attempts this season, a better ratio (18%) than Harry Kane and Bruno Fernandes, amongst many others. That second finish, opening up his body and guiding the ball with power (if that isn’t an oxymoron) with his weaker foot was absolutely stupendous.

Mason Greenwood
Michael Owen is the top-scoring teenager in Premier League history, with 18. Mason Greenwood has another five-and-a-half months to score four more goals and break that record. He’s already second on the list. The boy’s going to be a superstar. Mind you, Marcus Rashford is decent too.

Wolves
This hasn’t been a stellar Wolves season, largely because of their attacking bluntness that has seen them score goals at a rate of exactly one per league game. On Saturday evening, one Wolves reporter described the first 30 minutes as like queuing to get into a Wetherspoons and the replies were predictable; ‘blame the manager, shit tactics’ was one of them.

But this all feels a little unfair. Wolves lost Raul Jimenez to a serious injury, probably the striker who dominates his team’s attacking plans more than any other in the league. They have a small squad that has struggled with the relentless schedule. And they have won only one less home game than Chelsea and Leicester City.

That’s not to say that there haven’t been missteps, for which Nuno obviously shares the blame, but the disillusionment that some fans have expressed of late does hammer home the journey on which this manager (and, yes, his agent) have taken this club. Wolves still have a realistic shot of reaching 50 points for the third Premier League season in a row. They hadn’t done it once between 1982 and 2018.

Sheffield United
Norwich City have proved this season that relegation from the Premier League need not cause a hangover that makes re-promotion a difficult task. Norwich got 21 points last season and were dismal over the second half of the season. They lost their last 10 league games; Sheffield United might beat them by one.

But any Sheffield United fan who believes that their club is likely to repeat Norwich’s trick is guilty of wild and unmerited optimism, because everything here is different. Norwich kept their manager, kept their best players, had chosen not to spend big in the top flight and so not get relegated with a high wage bill and kept their ownership structure in place. They were relegated almost by design, sacrificing their first season back in the Premier League in the belief they could come back bigger and better.

Sheffield United have sacked their manager, have a squad that is both lacking in creativity and yet full with relatively expensive arrivals who have not settled well and this week saw their chairman resign from his position for personal reasons. Parachute payments will give the Blades a chance, but there are few other reasons to believe this club is ready to bounce back.

Oh, and they were also relegated this weekend. It’s been inevitable for so long that you probably didn’t even notice.

Fulham and late goals
It’s not the only reason that Fulham are surely going down, but the scores after 75 minutes of their last three matches: 1-0, 0-0, 1-0. Had those games ended there Fulham would be above Brighton and Burnley. As it is, they conceded seven goals in a combined 45 minutes to remove all doubt that they lack the quality and belief to stay up.

Everton’s defending
This season does represent a step forward for Everton because they still have a shot at reaching 60 points for only the second time in seven years and that might just be enough to see them qualify for the Europa League.

But it’s still very easy to frame this as a massive missed opportunity given the decline in Arsenal and Tottenham, and plenty of Evertonians are busy doing exactly that. Every time Everton look like they have shaken off their flaws, back comes a sloppy mistake to re-emphasise them.

Tottenham’s second goal was the perfect example, two points thrown away due to a lack of communication and poor decision-making that handed Harry Kane a chance to steal something unearned. That it had such obvious shades of Spurs’ opening goal suggests that Everton are just not learning quickly enough. Those are the differences between finishing in the top six and missing out.

It’s also no surprise that this missed chance came at Goodison. Since Carlo Ancelotti was appointed, Everton have won the same number of home league games as Sheffield United. Building a new stadium seems an expensive way of solving the problem, but maybe it’s worth it.

Jose Mourinho
There’s not much else to say, which itself is damning. Every fixture between now and the end of the season should provide Mourinho with an opportunity to prove that he merits being given another full preseason to stamp his identity on this squad. Instead, they’re providing overwhelming evidence that allowing that would be detrimental to Tottenham. They are a team that don’t appear to know how to play together and don’t appear to enjoy trying to. 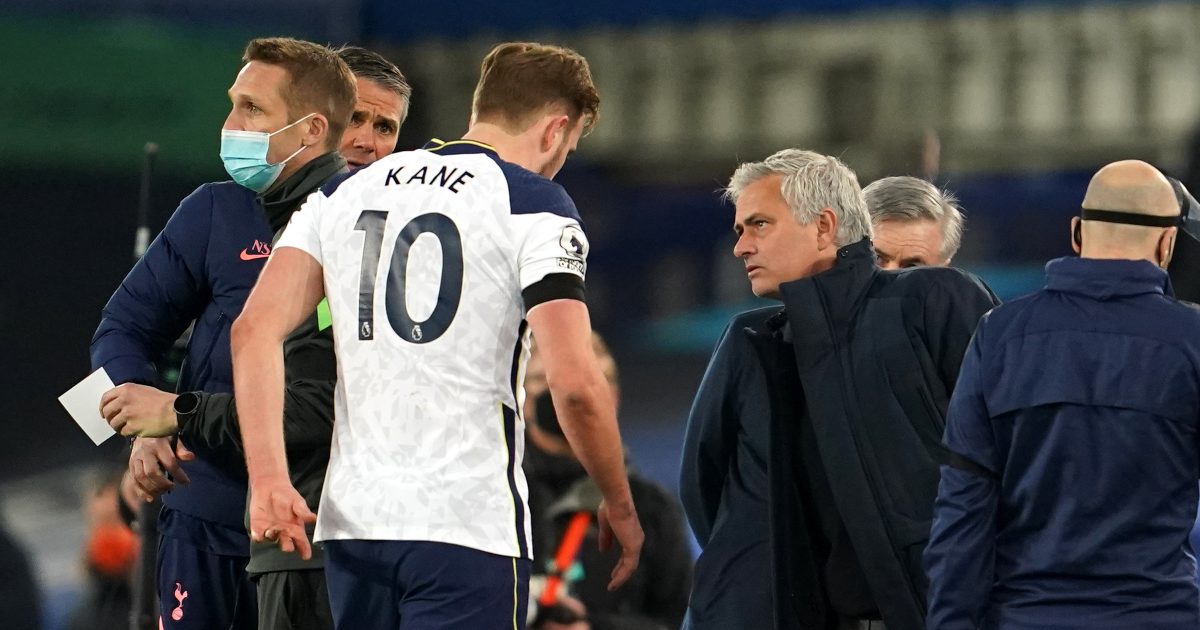 This week brought reports that Harry Kane is keen to leave the club this season over his immense frustration that they have not pushed on under Mourinho and it ends with another injury to those pesky ankles. If Tottenham are half a team with Kane starting, what risible fraction will they be without him?

It does now seem that the only way Mourinho can hope to keep his job is by winning the EFL Cup next weekend and using that as a platform to instil a winning mentality in his players. The first will be a huge ask without Kane, but it’s also reasonable to wonder whether a League Cup trophy can ever be enough to address the cloud of mediocrity that has engulfed Mourinho’s tenure. Is the manager himself even convinced, or has he simply shifted into self-protection mode?

West Ham
It’s tempting to frame this as a piece of classic West Ham, losing their nerve when things got real. But actually this was a game of Kerplunk: how many key first-team players can you remove before the marbles come crashing to the floor?

Harry Kane
Get your front pages ready for us to touch Kane’s ankles at noon and pray.

European Super League clubs
I’m sure I will write many more words on this if it goes further than this wanton display of brinkmanship and avarice. You will read many more eloquent words by other writers in the meantime. But can I just say this, to those clubs who want to set up a European Super League: Get f**ked.