Pearson peaked too soon. Watford are unique and should be judged accordingly. And Jose motors on. 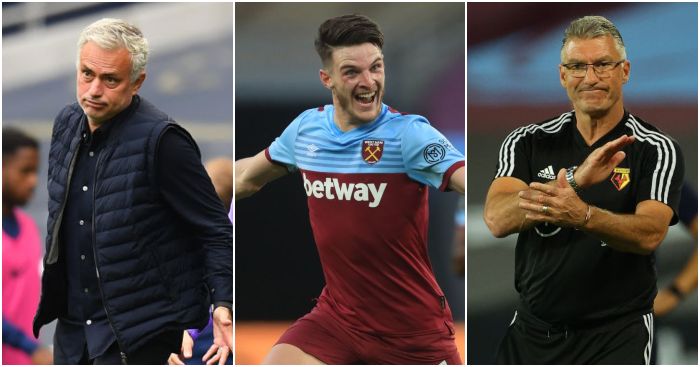 Nigel Pearson peaked too soon at Watford, who are a completely unique Premier League entity. Plus Jose Mourinho motors on.

British managers
There will be four British managers in the top half of the Premier League for the first time since 2014/15, and the highest such finish of any since 2013/14. Sam Allardyce has never been needed less on sports both talk and BEIN.

British strikers
There could be two English outright top scorers in the Premier League for the first time since 1999/2000. How typical that neither would have been part of the national team for more than two years.

Jose Mourinho
For the first time since Jose Mourinho’s opening two games as manager, Tottenham have scored three goals in successive Premier League matches. The difference? They have conceded one instead of four.

The Portuguese was “disturbed” and “destroyed” by the defeat to Sheffield United at the start of the month but four wins and a draw have followed. While the lows – no shots on target against Bournemouth – once seemed more revealing that the highs were instructive, this felt different.

Tottenham dictated the game rather than letting it happen to them. They made Leicester play a certain way. Their opponents were forced to react to them instead of the other way around.

Mourinho getting Manchester United in top 4 again? Imagine my unsurprise

They benefited from the fortune of an early own goal but that advantage was so ruthlessly exploited to the greatest effect that it felt like the closest to Mourinho of old we have had in some time. While three goals from four shots on target and a clean sheet with 30% possession at home against Leicester is hardly keeping Barcelona at arm’s length in the Nou Camp, it was Tottenham’s best all-round performance since probably September in the circumstances.

As shareable as the stats are – three clubs have more points and goals since his November appointment and only the top two have more wins – they do not tell the full story of how Tottenham have matured and refocused even in the last few weeks. The utmost credit must go to the manager.

Harry Kane
There will come a time when the football world learns not to write off such a phenomenal goalscorer, nor pigeonhole a truly gifted player. See you back here when he strains his ankle ligaments in October.

David Moyes
There will be many who scoff – both in east London and elsewhere – at the idea that beating relegated Norwich and panicking Watford is enough for West Ham to trust David Moyes with an actual pre-season.

But those players are not among them. Declan Rice sought out the manager after his delightful goal and reserved “a special mention” for him after the game.

“They work non-stop, 24/7 to get the best team out, to get the best tactics on the pitch and luckily we can get the three points for the manager as well,” he said, and that is half the battle. The fans might need convincing but if the people Moyes works with daily are behind him then he has earned a proper chance.

Tomas Soucek
Marouane? Is that you? The chest-control and pointy elbows numbers are unfortunately unavailable but winning 15 aerial duels, including that incredibly satisfying second goal, bodes well.

He and Jarrod Bowen have both added something different to this squad. Moyes, if nothing else, deserves the opportunity to build on those foundations.

Burnley
This is already guaranteed to be the highest points total in Burnley’s history from a 38-game season. Fifteen wins is their most in a top-flight campaign since 1975. Victory over Norwich was a little more fortuitous than (and just as Chris Wood-inspired as) their win by the same scoreline against the Canaries in September, but no less impressive in the context of a run of one defeat in 15 games.

If Burnley beat Brighton at Turf Moor on the final day, it will be their second highest ever points total in a top-flight league campaign, behind only their championship win in 1921. This is historic progress achieved in the most difficult circumstances.

Nick Pope
It should perhaps come as no surprise that a man whose name is a synonym for papal abduction looks quite so divine each week. Although Efan Ekoku did take things a little too far.

🗣️ "Sounds like this guy's pretty special between the sheets" 😳

Hilarious slip of the tongue about Nick Pope in commentary 🤣 pic.twitter.com/uVZnaJK6fS

The second-half save was as unconventional as the Onel Hernandez shot that forced it, but it showed Pope to be a goalkeeper performing at the peak of his powers.

It has been a peculiar Premier League career for the 28-year-old. His first season at Burnley was spent almost entirely behind Tom Heaton, with Paul Robinson playing the three games the club’s captain missed. Pope was then absent for the whole of 2018/19 with a shoulder injury.

Burnley finished 16th and 15th in those seasons. In between, he played 35 times in 2017/18 and has yet to miss a single minute of the 2019/20 campaign. The Clarets came seventh in the former and will finish anywhere between seventh and tenth in the latter.

He is the common denominator in the two best seasons of Burnley’s modern existence. And with one game remaining, he is on course to become the first English keeper since 2014/15 to win the Golden Glove. Are we staging some sort of uprising?

Danny Ings
Placing a spot-kick straight into Aaron Ramsdale’s arms took things a little too far, but Danny Ings now has more non-penalty league goals this season than Lionel Messi, Kylian Mbappe, Cristiano Ronaldo and any Premier League player. It’s getting to the stage where Michael Edwards might start feeling a little robbed.

Nigel Pearson
The recent performances might have been poor, the results alarming and the tactics confusing, but it is worth remembering that Watford were supposed to be in the position Norwich are now: sure of their fate and playing out the formalities of a feeble season.

Instead, he has given them hope where there previously was none, and a chance that didn’t exist before. He inherited a club seven points from safety in December and leaves them with a three-point cushion to 18th.

Pearson has overachieved but failed to adapt to the change in expectations from relegation battle to mid-table push. Had that six-game unbeaten run in the winter been stretched out over his reign instead of bunched into his first two months, it seems likely he would still be in charge. As it is, he helped Watford peak too soon.

To that end, perhaps the patient is justified in seeking a different solution. While many will and should recognise the fine work of Pearson, Watford have never been slow to sense a general downturn. With two games remaining against top-half opposition and a three-point gap to maintain, it is not difficult to see the logic in hoping to administer a shot in the arm.

Perhaps it is time to view Watford in a light unique to everyone else. They exist in an alternate reality where the common perception of what should and shouldn’t work is reversed. A club that employed four different managers in their promotion season has every right to assume the same method can be exploited for survival.

And if that turns Watford into the Premier League’s own trampoline, constantly searching for that new-manager bounce to sustain their top-flight status, then so be it. It flies in the face of every assumption in terms of stability and consistency but it bloody well works.

So express sympathies for a manager whose two Premier League seasons have seen mini-miracles end in immediate unemployment. Question a squad who seem to need to hear a variety of different voices to rejuvenate their focus and concentration. But there is little point holding this club to the same conventional standards as any other, particularly if safety is secured and the madness outweighs the method.

Ricardo Pereira and Ben Chilwell provide energy and width that Leicester have found difficult to replicate. The deterioration of Caglar Soyuncu culminated with the suspension that ruled him out against Tottenham. James Maddison’s injury has robbed them of their creative fulcrum.

Absence has undeniably seen Leicester’s start go squandered, but Brendan Rodgers cannot hide behind that alone. Leicester’s propensity to collapse upon suffering a setback is almost unrivalled yet they had 84 minutes to respond to James Justin’s own goal; they failed.

Leicester will almost certainly need a first win against Manchester United since September 2014 – and Rodgers a first victory over the same opponent since March of that year – to salvage Champions League qualification from this relative wreckage. A lowest possible finish of fifth cannot possibly be a failure for this club, but it would certainly be a disappointment.

Bournemouth
Whatever happens in their final match against Everton, Bournemouth have conceded more goals per game in their Premier League history (1.73) than Oldham have in theirs (1.69). And the former will have a sample of 190 fixtures, compared to the latter’s 84.

Norwich
The first team since February 1922 to lose five consecutive top-flight matches without scoring. With one game remaining before the sweet relief of relegation, only six teams have ever accrued fewer Premier League points, only five have ever suffered more defeats and only four have ever scored fewer goals.

That last game is away at Manchester City. Oh.

Sheffield United
Someone out there really does not want Europe to be dominated by greasy chip butties. And they could not be more misguided.

Jurgen Klopp has to be manager of the year but I'd make Frank Lampard a close second. Third in table, FA Cup final and CL last 16 after Hazard sale and transfer ban, while bringing through youth, is pretty incredible.