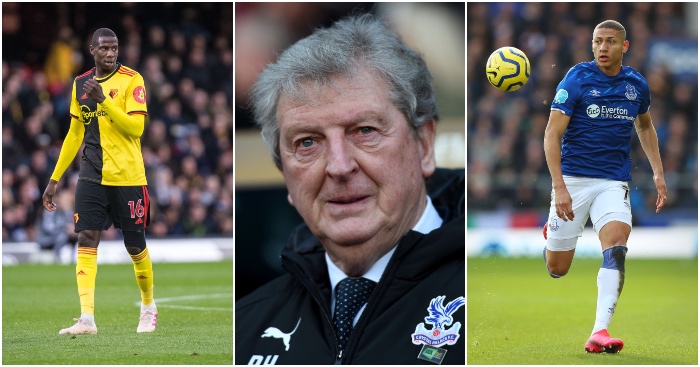 Richarlison is worth more to Everton than £85m. Crystal Palace might get that for Zaha but they couldn’t be trusted with it…

Everton and this very silly season
The most remarkable aspect of Everton’s climb from the bottom three to seventh over a period of just two months is that they haven’t even had to be perfect. Everton have only won six of their last 11 matches, but that has been plenty enough to wrestle their way above a mediocre middle pack that stretches all the way from Tottenham to Watford in 19th. Had they avoided conceding two stoppage-time goals to Newcastle United recently, Everton would be level on points with fifth.

But that doesn’t mean Carlo Ancelotti doesn’t deserve an awful lot of credit. He is clearly a top-class manager, but took a risk in joining a club in crisis in mid-season and almost instantly changed the mood at Goodison.

Since he took over, Everton rank third in the Premier League for total shots per match, fourth for chances created per match and ninth for shots faced per match. Almost 20% of those shots faced came in the game away at Manchester City.

Everton were never really in any serious danger of going down (although that is easier to say in hindsight), but Ancelotti hasn’t just taken his new club away from crisis; he’s made European qualification an unlikely hope. Continue this fine work, and Everton will go into the summer with renewed belief that they can avoid another season zero.

But why on earth would Everton accept that bid? Thay paid £50m for Richarlison, he has years left on his contract, he’s improved since joining and he’s 22.

In the ten days since the window closed, Richarlison has proven his worth again. It was his surging run in the dying moments that earned Everton all three points against former club Watford, and he followed that with a goal and assist against Crystal Palace.

A £50m price tag creates a pressure that is not easy to cope with. It persuades people to ignore any excuses for any output below brilliant, and skews the debate from what a player is or has to what they aren’t and don’t have. Richarlison didn’t choose his transfer fee.

So a little bit of balance is needed. Richarlison has played under three different managers at Everton in 18 months. He’s also played in multiple positions, is sometimes expected to lead the line or to create and score from wide positions. Again, he’s 22 and has played an awful lot of football; expecting him to be the finished article or be uber-consistent is nonsense.

Only one player younger than Richarlison has scored more Premier League goals since the start of last season, and that’s Marcus Rashford (24 vs 22), but the Brazilian is expected to be a far more complete attacking player. For starters, he has made 104 tackles vs Rashford’s 36, and has missed only 11 big chances compared to Rashford’s 25. He’s scored almost a quarter of his goals with his head. And he’s been playing in a worse team (mind you…), often in a less attacking position.

Richarlison isn’t the complete player. He retains an ability to frustrate his own supporters and occasionally seems to annoy himself, too. But given his age, he deserves far more credit than criticism. If Everton are to move to the next level, Richarlison will be a key cog in the machine.

Grit is probably the most expected characteristic of any Chris Wilder team. He is a manager who demands more from his players and insists that setbacks are inevitable; it’s how you respond to adversity that defines you.

But it wasn’t always that way. Sheffield United only collected 12 points from losing positions in the whole of last season in the Championship. If that’s partly down to them having the lead far more often, they still trailed in 15 league matches and gained points in only six of them.

To increase that ability to bounce back from 40% to 60% despite promotion to the highest league says plenty about the spirit within this group and the tone that is set by the manager. They’re just two points off the Champions League places, which is the most remarkable aspect of this very weird season.

Abdoulaye Doucoure
His team may have frittered away more points, but Doucoure remains a player reborn under Nigel Pearson.

Under Javi Gracia and Quique Sanchez Flores, Doucoure played most often as one of a central midfield pair in a 5-3-2 or 4-4-2 alongside Etienne Capoue. Either Dourcoure pushed on, and Watford were left exposed to the counter attack, or Doucoure stayed put and so Watford lost his ability to drive forward and get into the penalty area.

Pearson had a different plan. By recalling Nathaniel Chalobah and playing him alongside Capoue, Doucoure was moved into an advanced midfield position. If a 4-2-3-1 might be ordinarily expected to contain a No. 10, Watford’s is slightly different. With Gerard Deulofeu and Ismaila Sarr (or Roberto Pereyra, when Sarr has been injured) given the responsibility to create chances from out wide, Dourcoure effectively has a free role to roam in midfield. Since Pearson was appointed, he has scored three league goals and assisted another. He has had 18 shots, compared to 26 between August and December 14.

That matters, not just because it gives Watford an extra goal threat and leaves Troy Deeney less isolated, but because it means that Doucoure in enjoying his football more. Playing with added defensive responsibilities having missed out on an intended summer move to Paris Saint-Germain or the like is no way to keep an excellent midfielder happy.

West Ham
Can’t lose another game if you don’t play it, can you? In Ciara We Trust.

Writers of weekend columns
Get paid the same if there’s ten games or three, don’t I? And it allows me more space to waffle on about the games that did take place. Hurrah.

Crystal Palace and their handbrake
The notion of a team ‘winning’ the transfer window contains enough flaws that it renders the term almost meaningless, but they can certainly lose one. Crystal Palace were crying out for additions to a squad that was desperately low on strength in depth and quality in a variety of positions, but signed only a failed Premier League striker on loan (Cenk Tosun) and a midfielder from Dundee United’s reserves (Scott Banks). When the club needed an off-field boost to change the mood on the pitch, they took backward steps.

Roy Hodgson is now coming in for some stick with Crystal Palace in freefall. On Saturday we saw the worst of them: overly reliant on Wilfried Zaha to create and finish chances like an overworked one-man band, an ageing, creaking team that struggles to create chances and a side that has begun to concede goals at a quicker rate than they were before. Palace’s over-performance in the first half of the season means that their heads are above water for now, but it’s not hard to envisage them being dragged into trouble. Should results go against them over the next week, they could end it three points above the bottom three.

But then this is not on Hodgson, not really. At the last count, Palace had the eighth-highest wage bill in the Premier League and they continue to pay the price for an extended period of shambolic, haphazard recruitment that leaves them paying big money for small returns. Selling Zaha in the summer for £60m might seem a sensible policy given that he clearly wants Champions League football, but that’s only if supporters can trust the club to spend the proceeds wisely. History suggests that they shouldn’t hold much confidence.

Crystal Palace sold their best young player last summer and spent £7m on permanent transfers. They kept Zaha but asked him to do everything and didn’t support him adequately enough in that task. They haven’t had a top scorer (in all competitions) who has managed more than 15 goals since promotion. Their best hope is to limp over the line. And that isn’t much fun for those who traipse to Selhurst Park every fortnight or travel the country to watch their team.

Watford, dragged back into bad habits
Back in trouble thanks to an inability to hold onto leads. Three points became none against Everton and three became one against Brighton. That’s the difference between being four points outside the bottom three and being 19th having played an extra game. In a relegation fight that is likely to go down to the wire, such generosity is ill-advised.

Pearson’s job is now to ensure that Watford do not succumb to the bad habits that got them into this mess. Only West Ham have lost more points from winning positions than their 17 this season, and no team in the Premier League have a worse goal difference in the last 15 minutes of the match than their -9. That goal difference has been exacerbated during their last two matches.

Is this a direct result of Pearson’s demand that his team play with a high-intensity style? Perhaps. The manager has regularly talked up the increase in work ethic since he took charge, and nobody is campaigning for a return to the half-paced acceptance of defeat under Javi Gracia and Quique Sanchez Flores, but Pearson must also find a balance if his players are becoming fatigued and prone to conceding goals late in matches.

Brighton’s finishing
A point at home to Watford that will have felt like one earned given that they came from behind, but another opportunity missed to pull themselves clear of trouble. Brighton have won one of their last 11 league games, and that includes a recent run of four gentler fixtures against Bournemouth, West Ham, Watford and Aston Villa.

Brighton are one of the Premier League’s more infuriating teams, albeit among healthy competition. Graham Potter has revolutionised the club’s playing style and they often outplay their opponents for long periods, but that doesn’t count for an awful lot if you lack the ability to translate impressive build-up play into wins. And for that we must blame the strikers, despite the three goals against West Ham last weekend.

Brighton’s shot conversion rate is 9.2%, the third-worst in the division. But they have missed 38 big chances this season (as defined by Opta). That puts them fourth in the league behind Liverpool, Manchester City and Chelsea, who all create significantly more. In terms of the percentage of their big chances scored, Brighton’s 20.8% is more than 6% lower than any other club in the division.

Neal Maupay was left on the bench against Watford, and that has been coming for a while, but he is not the only guilty party. Improving that record is the only way in which Brighton will stay clear of relegation danger. This one is on them, not Potter.

Bournemouth
See the section above. Eddie Howe’s team played pretty well at Bramall Lane, and created enough chances to win, but their fragility means that they were beaten by a gritty and gutsy opponent. These aren’t great characteristics in the midst of a relegation fight.