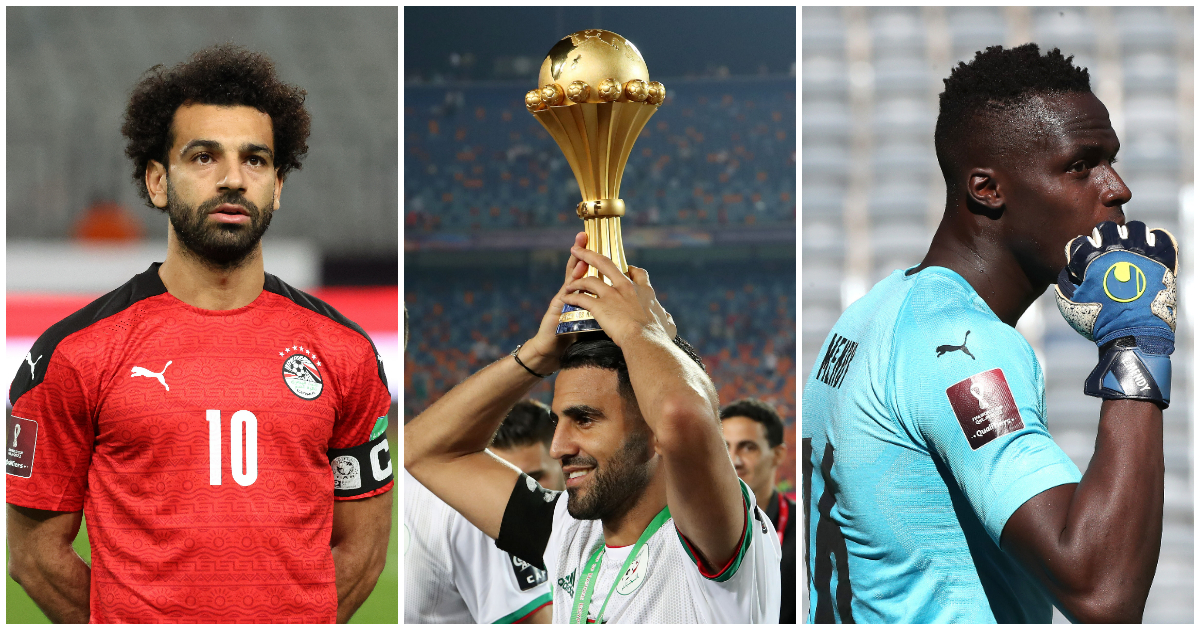 The Africa Cup of Nations kicks off next month, meaning Premier League players will abandon their clubs, which could derail title challenges and render a blow to relegation candidates. All for a “little tournament” too…

Here’s a team full of AFCON absentees who will be representing their country, not their club, from January 9 until (potentially) February 6.

Goalkeeper – Edouard Mendy (Chelsea and Senegal)
Mendy has been a revelation since Frank Lampard brought him in from Rennes in September 2020, barely putting a foot (or hand) wrong after replacing Kepa Arrizabalaga between the sticks at Stamford Bridge. Kepa has since carved out a reputation as a penalty-saving sorcerer but Mendy will still be a huge miss for the Blues. This is an excellent opportunity for Kepa to show his worth to Thomas Tuchel, but it would be hard to imagine the Spaniard retaining the No 1 shirt once his 29-year-old teammate returns. Senegal are in Group B alongside Zimbabwe, Guinea and Malawi, which is a very favourable draw for Aliou Cisse’s side, but not for Chelsea.

Centre-back – Eric Bailly (Man Utd and Ivory Coast)
No full-backs in this team, because the attacking talent leaving in the middle of the Premier League season is absolutely incredible. We will cheat slightly and only use three defenders.

The Ivory Coast will take two Manchester United players to AFCON, Bailly and 19-year-old winger Amad Diallo (zero minutes for United this season), and are one of the strongest teams going into the tournament. West Ham flop/Champions League demon Sebastian Haller will lead the line for the Ivorians, with Premier League duo Wilfried Zaha and Nicolas Pepe likely to start either side of him.

Bailly will doubtless be looking forward to January as he will get a consistent run of games, something he has not experienced for a very long time at Manchester United, and he could be absent from Carrington for nearly a whole month, though Ivory Coast are joined by a very good Algeria side in Group E.

Centre-back – Daniel Amartey (Leicester and Ghana)
A player who will feel right at home in our back three, Amartey has become a mainstay of Brendan Rodgers’ Leicester back line after Wesley Fofana suffered a horrific injury in pre-season.

The 27-year-old represents a Ghana side that are not as good as they once were, but have some very handy young players coming through in Kamaldeen Sulemana of Rennes and Ajax’s 21-year-old playmaker Mohammed Kudus. The Black Stars are in Group C alongside Gabon, Comoros and Morocco, which is a relatively tricky group. But even if they finish third, they will have a chance to progress to the next round via the best third-placed team route.

Centre-back – Romain Saiss (Wolves and Morocco)
The Moroccan captain completes the defence, and will also feel very comfortable operating in our back three having done so for years at Molineux.

Morocco go into the competition in excellent form and will fancy their chances in Cameroon. The team ranked 28th in the world have an abundance of talent throughout their squad. QPR’s Ilias Chair, Chelsea winger Hakim Ziyech, PSG right-back Achraf Hakimi and Sevilla pair Youssef En-Nesyri and Munir El Haddadi will all play a huge role under Vahid Halilhodzic.

Saiss is an underrated player in the Premier League, and you rarely see anyone mention him, good or bad. A model of consistency, the fact you rarely hear his name can never be a negative thing as fans in England absolutely love to point fingers and criticise.

Right midfield – Riyad Mahrez (Man City and Algeria)
Now let’s get giddy with the attacking talent. Our second national team captain in a row, everyone knows how good Mahrez is and how consistent he has been since setting the league on fire in 2015/16 for Leicester. My personal prediction for the Premier League Player of the Year, the 30-year-old has started the season well, though not quite that well.

The £60m man has two goals and one assist in ten league matches this campaign, and also has four in five in the Champions League. He would be a massive miss for every single top-flight side, except Manchester City, who have a plethora of talent waiting for a chance in Mahrez’s absence. That’s not to say that the Algerian winger won’t be missed, but City have spent a little bit of money in recent seasons to prepare for such eventualities.

Algeria are the favourites to win the whole thing, and thankfully don’t have an awful lot of Premier League representation. Being in a group with Ivory Coast is not ideal, but the Greens should still thrive. As well as Mahrez, Algeria have Nice duo Andy Delort and Youcef Atal, West Ham’s Said Benrahma, former Leicester and Newcastle striker Islam Slimani, AC Milan midfielder Ismael Bennacer and Villarreal’s Aissa Mandi. Not too shabby.

Centre midfield – Thomas Partey (Arsenal and Ghana)
On his day he is one of the best midfielders in the Premier League, but Partey’s time in England has been hampered by injuries so that day does not come often enough. The 28-year-old missed Arsenal’s first three league games this season and everyone knows how they went.

The second Ghanaian in this team, the former Atletico Madrid man is absolutely vital for head coach Milovan Rajevac and he will be praying that his talismanic midfielder does not pick up a knock for the Gunners before January’s “little tournament”.

Partey has one goal in 43 matches for Arsenal, which was not a 30-yard screamer despite attempting at least seven every single match. For Ghana, on the other hand, he has struck 12 times in his 33 caps; get your money on him being top scorer at AFCON.

Centre midfield – Yves Bissouma (Brighton and Mali)
Some excellent players are missing out on our selection but it is important to emphasise our determination to include as many clubs and nations as possible. Not that Bissouma is not entirely deserving of his place.

Mali occupy Group F alongside Tunisia, Gambia and Mauritania, and have a pretty decent chance of topping the group and advancing to the first knockout round. The only other Premier League star likely to represent Mohamed Magassouba’s side is Southampton winger Moussa Djenepo.

Bissouma has emerged as one of the best ball-winning defensive midfielders in England and has attracted the interest of Arsenal, Liverpool and Man Utd in recent months. He and Partey get in the side at the expense of some pretty good honourable mentions in Guinea and Liverpool star Naby Keita, Leicester and Nigeria midfielder Wilfred Ndidi, Mo Elneny of Egypt and Arsenal, and Brentford’s Nigerian midfield man Frank Onyeka.

Left midfield – Ismaila Sarr (Watford and Senegal)
It was a tough choice between Sarr and his Watford teammate Emmanuel Dennis, who have both been very impressive this season. With both players missing, as well as a few others, the Hornets could really struggle in January. Being in a relegation dogfight is tough enough, but losing Dennis and Sarr, alongside William Troost-Ekong, Adam Masina and Peter Etebo, could be catastrophic.

Sarr is the second of four wingers in this list, and easily the most controversial and debatable inclusion. But it’s nice to include a player who represents one of the teams outside the so-called ‘big six’. You can probably tell who the other two wide-men will be, but we won’t give you our list of snubs just yet.

As mentioned before, Senegal share a group with Marvelous Nakamba’s Zimbabwe, Naby Keita’s Guinea and Malawi – who unsurprisingly have no Premier League representatives. One day, our Malawian readers, one day.

Right wing – Mohamed Salah (Liverpool and Egypt)
The best African player in the Premier League right now, and probably the best African player to ever play in England, Salah has started this season in relentless form, which is no surprise given his incredible scoring numbers since moving to Liverpool from Roma in 2017.

There isn’t much to say about Salah that hasn’t already been said, so let’s focus on Egypt and their chances in Cameroon. They are in a group alongside Nigeria, Sudan and Guinea-Bissau, and are highly fancied to win the whole thing. The Pharaohs are the most successful team in AFCON history, winning the competition seven times, but have not come out on top since 2010.

The 29-year-old is the captain of his national side and goes into the competition in terrific form. So far this season, he has scored 19 in 19 for the Reds and has also notched seven assists in the league. With him in their side, Egypt will 100% fancy their chances – which is bad news for Liverpool.

Centre-forward – Pierre-Emerick Aubameyang (Arsenal and Gabon)
The French-born Arsenal striker will be at his first AFCON since 2017. The 32-year-old captains both his club and country and will be hoping to guide Gabon to a third-place finish at the very least.

Aubameyang has been fairly inconsistent this season in front of goal, and is operating in a slightly different role under Mikel Arteta. His miss against Newcastle on Saturday, as well as a display against Watford which could be regarded as a better defensive display for the Hornets than any of their actual players in 21/22, has stolen attention away from his tremendous work off the ball for the Gunners.

Gabon will need him to lace up his shooting boots or they stand no chance. Denis Bouanga of St-Etienne is a handy player, but Auba does not have the players around him who can bail him out like in north London. As well as Nicolas Pepe, Elneny and Partey, the former Borussia Dortmund striker will be absent for the Gunners in what is a huge blow for Arteta.

Left wing – Sadio Mane (Liverpool and Senegal)
The second Liverpool and third Senegal player, Mane rounds off what is an excellent team of players who will be dearly missed by their employers next month.

We have already spoken plenty about Senegal, but Mane is definitely the best Premier League player for the west African nation. The fact that Liverpool are losing both Mane and Salah is bloody massive and could put a huge dent in their title challenge, especially with Man City only missing Mahrez. Jurgen Klopp has a terrific squad, there is no doubt about that, but they are going to miss these guys a great deal. It’s your time to shine, Divock Origi.

Picking the wide men was not easy as there was some pretty stiff competition. Sarr could easily have been replaced by his teammate Dennis, Hakim Ziyech, Nico Pepe, Maxwel Cornet, Bertrand Traore, Wilfried Zaha, Alex Iwobi or even Kelechi Iheanacho.