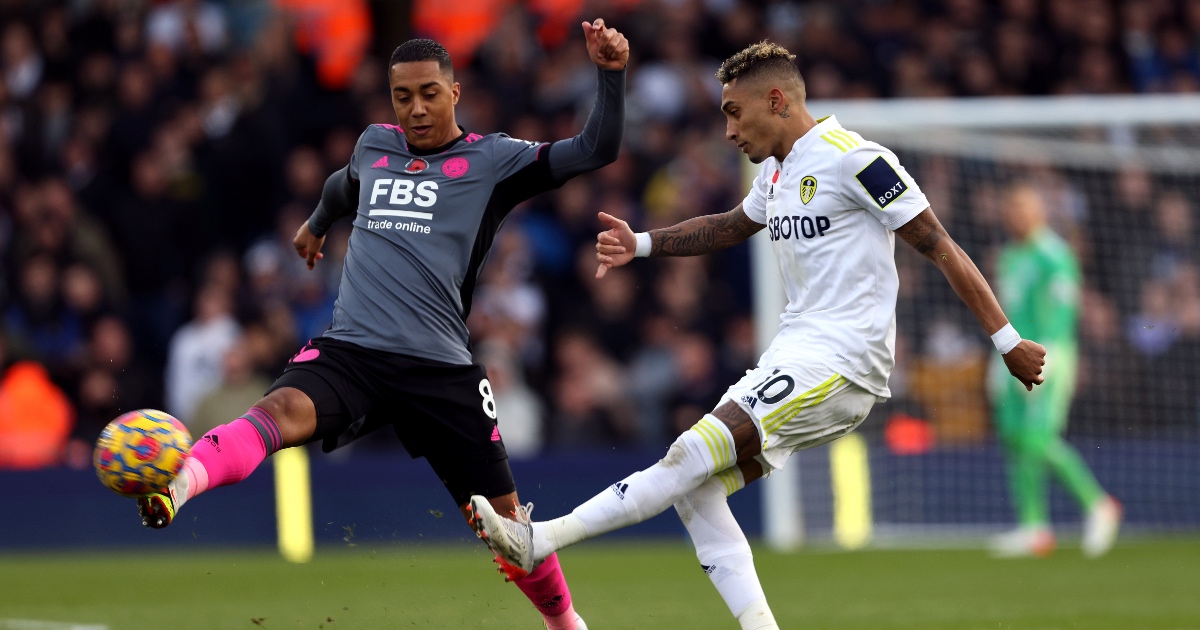 Manchester City, Liverpool and Chelsea are a whole lot better than the rest this season, with 15 of the top 20 players in the WhoScored ratings from the Big Three.

We’ve done a composite XI of the other 17 clubs, based purely on those WhoScored ratings. No one per club stuff and no Manchester United as their top-ranked player was Paul Pogba, in 32nd place. Average rating in brackets.

Aaron Ramsdale – Arsenal (7.03)
There’s a good case for him being the signing of the season and no-one would have said that when Arsenal paid £30million for him – most were laughing at their foolishness. He’s a leader, his distribution is fantastic and his athleticism is matched by very few.

Takehiro Tomiyasu – Arsenal (6.98)
There’s a refreshing no-nonsense quality about him. Just gets on with things and does almost all of it very well indeed.

Shane Duffy – Brighton (7.07)
A rock at the heart of the fifth-meanest defence in the Premier League, Duffy must have thought his time at Brighton had come to an end having made the trip north of the border last season, but he’s made himself an indispensable member of Graham Potter’s team once again.

James Tarkowski – Burnley (7.12)
Amid talks of a move in January, Sean Dyche described the Burnley centre-back as a “fantastic professional” whose performances have been consistently “top drawer”. That’s exactly why Newcastle want and need him.

Rayan Ait-Nouri – Wolves (7.12)
One of those players who would be lauded far more highly if he was playing for one of the big boys. Improving all the time both defensively and on the front foot. And he’s got the odd bit of something special in his locker…

A lovely bit of skill from Rayan Ait-Nouri ✨ pic.twitter.com/XSFLkp9MNH

Declan Rice – West Ham (7.31)
It seems to have dawned on Rice this season that he has the ball control, speed and strength to run past almost anyone. Only Joao Cancelo, Allan Saint-Maximin and Bernardo Silva have made more carries into the final third.

Youri Tielemans – Leicester (7.28)
Everything he does looks beautiful. He somehow seems both quick and lackadaisical in his movements with and without the ball. He has time granted to those with only the most impeccable first touch and awareness of space, teammates and opposition players. He’s scored five goals this season and most of them have been crackers.

Conor Gallagher – Crystal Palace (7.54)
The Chelsea loanee is fourth of all Premier League players in terms of average rating, just below Mateo Kovacic. And therein lies the conundrum for the 21-year-old. Six goals and three assists already for Palace this season, he will play close to every game under Patrick Vieira at Selhurst Park. Return to Stamford Bridge in the summer and he will have world-class competition to contend with.

Raphinha – Leeds (7.26)
His seven goals and one assist have been worth eight points to Leeds this season. He’s the 19th-highest ranked Premier League player. Leeds’ next best is Liam Cooper (6.81) in 114th. Raphinha is very unlikely to be at Elland Road next season.

Lucas Moura – Tottenham (7.20)
A surprise inclusion, perhaps, given he has just one goal and one assist this season and Emmanuel Dennis, for example, has seven goals and five assists. But it will have been clear to anyone watching Spurs this season that Lucas has been far better and more consistent than any of his more illustrious attacking teammates.

Ivan Toney – Brentford (7.35)
The “best penalty taker in the world” according to Thomas Frank and the best ‘proper striker’ in the Premier League this season. Surely the tallest 5ft 9ins footballer in history.