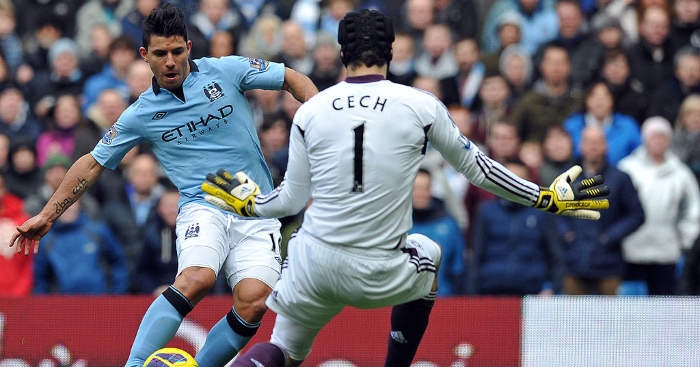 Anyway, here’s a team of summer signings that fired their team to the title in their first season. As you would imagine, it’s quite the side…

Goalkeeper: Petr Cech – 2004/05
Carlo Cudicini could have been forgiven for being slightly perplexed when Chelsea signed Petr Cech for £12million in the summer of 2004. The Italian stopper was at the time considered one of the best Premier League goalkeepers and had conceded just 30 goals in the previous season as the Blues finished second behind Arsenal. Puzzlement must have quickly turned to understanding as he watched from the sidelines: Cech kept 24 clean sheets and conceded an astonishing 15 goals as Chelsea stormed to their first Premier League title. The records still stand today and may well never be broken.

Right-back: Kyle Walker – 2017/18
Manchester City spent £126million on full-backs in the summer of 2017: £52m on Benjamin Mendy; £47m on Walker; £27m on Danilo. Walker has turned out to be the only real success story of the three with Mendy initially struggling with injury and then fighting to refind his form, while Danilo played very little before Juventus inexplicably paid £33m for him last summer. Walker’s role in City’s success is far too often taken for granted: he is consistently very good.

Centre-back: Jaap Stam – 1998/99
“Jaap Stam was the one. Without a question, I made a mistake there.” Sir Alex Ferguson’s admission when asked about his Manchester United regrets. He accepted the £16.5m Lazio offered for the towering Dutchman in 2001, to cut short what was a brief but glittering spell at Old Trafford. United lost just four games in Stam’s entire first season at the club; he didn’t play in two of those defeats. Oh, and he won The Treble.

“Ricardo did have those lethal dark arts at his disposal, we all knew that. He was an asset to the team in an almost Jason Bourne sort of way. If you got hit by Ricardo, you tended to stay hit. He wasn’t just an out and out football assassin, his true world-class ability above all his other attributes was his uncanny ability to read the play and see where the danger was likely to develop from.”

The greatest Chelsea transfer window ever.

Left-back: Marcos Alonso – 2016/17
Gael Clichy and Giovanni van Bronkhorst may have been safer options, but Alonso steals the left-back spot for his unexpectedly triumphant return to the Premier League. After forgettable spells with Bolton and Sunderland, Antonio Conte spent £20m to bring the Spaniard back to England from Fiorentina. He scored six goals and laid on three assists playing predominantly as a left wing-back to prove the doubters wrong.

Left midfield: Marc Overmars – 1997/98
The medical department advised Arsene Wenger not to sign Overmars from Ajax as the winger was recovering from a cruciate ligament injury, but the French manager said he “went with his guts”. Overmars finished the season as Arsenal’s second top scorer behind Dennis Bergkamp to drive the Gunners to their first Premier League title. Well done, guts.

Central midfield: Roy Keane – 1993/94
Of Roy Keane’s 13 Premier League seasons for United, hist first – having signed from Nottingham Forest – was his most productive. He scored five goals and laid on six assists as a genuine box-to-box midfielder, starting 34 of United’s Premier League games – also the best return of his career at Old Trafford.

Central midfield: N’Golo Kante – 2015/16 and 2016/17
Buy N’Golo Kante; win the title. Antonio Conte knew it and he still does, as he tries to sell half of his Inter Milan squad to raise funds to reunite with the French midfielder. The man in Leicester’s remarkable title-winning side, Kante was signed by Conte and then beame the driving force for Chelsea to pick up consecutive Premier League winners medals with two different clubs. Kante made the mistake of not joining a new team the season after, so didn’t claim a third, but remedied the situation by winning the World Cup. Not bad.

Right midfield: Arjen Robben – 2004/05
Arjen Robben only started 14 Premier League games in his debut season at Stamford Bridge: he suffered with injury. Of the 18 games he featured in, he only failed to score or assist in four of them, finishing the season with seven goals and nine assists. He – and Damien Duff on the opposite wing – were electric in Chelsea’s first title-winning campaign for 50 years.

Striker: Robin van Persie – 2012/13
An absolute must in this team. “We never thought we could get Van Persie, I thought Arsenal are not going to let thim go,” Sir Alex Ferguson said after signing the previous season’s players’ and football writers’ player of the year for just £24million. It would turn out to be the perfect signing in the great manager’s triumphant final season at Old Trafford, as Van Persie scored 26 goals and provided 15 assists as United eased to the title.

Remember when he capped off his debut season with this? 👀pic.twitter.com/kjEeXdXNJG

Striker: Sergio Aguero – 2011/12
He would have made this team if he had scored just one goal. But as it turns out, Aguero scored a further 22 before the last minute title-clincher against QPR. He also claimed his highest number of Premier League assists in his first season, with ten.