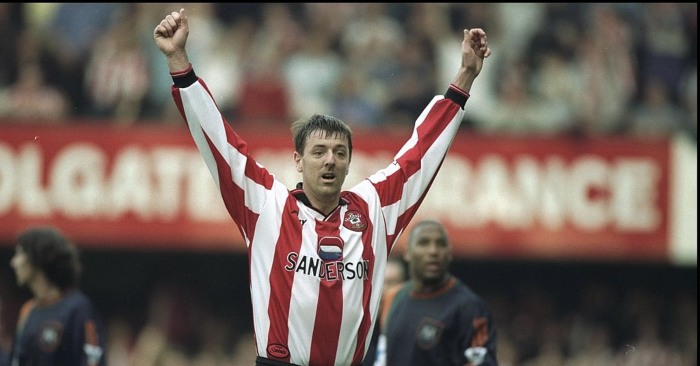 Sheffield United certainly seem like the early losers of the season but there’s still plenty of time for Chris Wilder to turn things around. Eleven teams have escaped the drop after sitting bottom of the pile nine games into a Premier League campaign, so here’s a side made up from players who played a key role in helping their club to safety after a bad start.

Goalkeeper: Martin Dubravka
A couple of years ago Rafa Benitez’s Newcastle United side suffered a terrible start to the season, going without a win until the 11th match of the campaign. However, come May the Magpies finished in a comfortable mid-table place, conceding fewer goals than Manchester United and Arsenal. Slovakian goalkeeper Martin Dubravka was in fine form and kept 11 clean sheets to help his side stay clear of a relegation fight. If you fancy a goalkeeper challenge, try naming the ‘keeper who helped Southampton stay up after a bad start two seasons running in the late nineties.

Centre-back: Dave Watson
A mainstay of the Premier League since the competition’s first season, Everton flirted with relegation in the early nineties and looked to be heading for the drop at the start of the 1994/95 campaign, losing eight of their first 11 games and only managing to draw the other three. Former Toffees forward Joe Royle came in as manager and steered the club to safety, with club captain Dave Watson marshalling the defence to seven clean sheets in a row as they defeated Liverpool, Chelsea and Leeds without conceding. The Merseyside-born centre-back helped his team to fifteenth spot in the league and then went on to hold the FA Cup aloft at Wembley come the end of the season.

Centre-back: Colin Hendry
Everton’s FA Cup victory over Manchester United in 1995 left the Red Devils without a trophy that season, after Blackburn Rovers pipped them to the Premier League title. However, just over a year later Rovers found themselves at the wrong end of the table, failing to win any of their first 11 games in the 1996/97 campaign. Ewood Park legend Tony Parkes took over as manager from Ray Harford and Rovers soon became much harder to beat. Scottish defender Colin Hendry won the club’s Player of the Year award, putting in solid performances at the back to help his side finish the season with fewer goals conceded than champions Manchester United.

Centre-back: David Weir
A few months after beating Champions League winners Liverpool to the coveted fourth place spot in the Premier League, Everton started the 2005/06 season in terrible form, losing seven of their first nine games. However, David Moyes managed to turn things around in the new year with veteran centre-back and club captain David Weir leading a defence that held firm in six 1-0 victories as the Toffees battled hard to finish in a comfortable mid-table spot.

On this day in 2006 Everton beat Manchester City 1-0 at home (David Weir). pic.twitter.com/VJgsd68Dlr

Right wing: Aaron Lennon
Jose Mourinho has guided Spurs to the top of the table this season but back in 2008 Tottenham were toiling under the leadership of Juande Ramos. Harry Redknapp was drafted in to take over from the Spaniard and was given the taxing task of getting the most out of a bare-bones side that had lost key man Robbie Keane to Liverpool in the summer. New signing Luka Modric was yet to reach top form whilst Gareth Bale was still plying his trade as a left-back, but Redknapp did have Aaron Lennon playing perhaps the best football of his career. The Yorkshire-born winger picked up the club’s Player of the Season award after helping the north London side to a respectable eighth-place finish.

Central midfield: Matt Le Tissier
Back in the nineties, Southampton were famous for making hard work of Premier League survival and the relegation escapists often had club legend Matt Le Tissier to thank for keeping them in the top flight. The woefully undercapped Le Tissier was the leading goalscorer and assist-maker for the Saints in the 1997/98 campaign, a season that started with seven losses from the first nine games for the side. An impressive three-month spell from December through to February saw Dave Jones’ team pull clear of a scrap at the bottom end of the table and they eventually finished in 12th place.

Central midfield: Jason Puncheon
Ian Holloway had led Crystal Palace back to the promised land after a Championship play-off win over Watford at the end of the 2012/13 campaign but he departed Selhurst Park in November after a terrible start to the Premier League season. Tony Pulis came in and naturally made the side far more Tony Pulis-like, with Jason Puncheon scoring the goals in key 1-0 wins over Stoke City, Hull City and Aston Villa. By the time the Eagles came back from three goals down to ruin Liverpool’s season in early May, they were sitting comfortably in mid-table.

Since Jason Puncheon signed for the club in 2013, Palace haven’t won a single league game he hasn’t started.

WE NEED HIM. #CPFC

Left wing: Wilfried Zaha
Four years after Holloway departed Selhurst Park following a poor start, new Palace boss Frank de Boer suffered the same fate after a dreadful start to the 2017/18 season. Roy Hodgson came in to replace the Dutchman and although the former England manager lost his first few games, the Eagles were soon hovering in mid-table and ended up in 11th place come the May of 2018. Wilfried Zaha was the main man at Selhurst Park yet again and picked up his third Palace Player of the Year award in a row.

Striker: Malcolm Christie
Derby County may only have one win from 12 games in the Championship this season but 20 years ago the Rams went on a 13-match winless streak at the start of the 2000/01 Premier League campaign. Jim Smith’s side faced a relegation scrap but improved results saw them pull clear of the bottom three and a shock 1-0 victory over champions Manchester United in early May confirmed their survival, with leading goalscorer Malcolm Christie the hero at Old Trafford. The Red Devils didn’t care about the defeat too much, as the result condemned yet-to-be-noisy neighbours Manchester City to the second tier.

Striker: Jermain Defoe
Despite a terrible start to the 2015/16 campaign, Jermain Defoe wasn’t going to let Sunderland’s Premier League status die without a fight. Sam Allardyce replaced Dick Advocaat early in the season and started to brighten things up at the Stadium of Light. Defoe scored 15 times in the league, ten more than any other Sunderland player and the England striker’s winning goal against Chelsea in May proved vital as his side finished in 17th place, two points ahead of local rivals Newcastle United.

Striker: James Beattie
Southampton seemed determined to make an even more miserable start to the 1998/99 season than they had the previous year, with the Saints picking up just two points from their first nine games. A relegation scrap followed but three wins from their final three fixtures saw the south coast side survive, with James Beattie bagging goals in vital victories over Leicester City and Wimbledon in the May of 1999. Beattie picked up the club’s Player of the Season award, having only arrived at the Dell at the start of the campaign as part of the deal that took Kevin Davies to Blackburn Rovers. Whilst Beattie thrived in his new home, Davies struggled at Ewood Park, scoring just once, with Rovers dropping out of the top flight just four years after lifting the Premier League title.