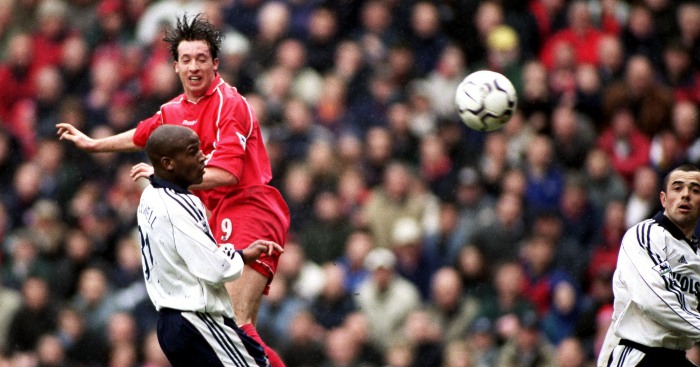 A big midweek clash sees Tottenham and Liverpool clash in a battle for the number one spot at Christmas, with the Reds having the better form in recent clashes between the two clubs. Spurs haven’t beaten the Merseysiders since a 4-1 win at Wembley in 2017. Dele Alli found the net that day and although he’s unlikely to be the hero this time round, one of Klopp’s or Mourinho’s men could well set their side back on track after disappointing draws at the weekend.

Here’s an XI made up from players who made a difference in this Liverpool v Spurs fixture during the Premier League era….

Goalkeeper: David James
Hopefully this Big Six clash doesn’t follow the same pattern as the Manchester derby, with a cautious desire not to lose trumping the will to win. There have been six 0-0 draws between the two since the Premier League began, with the first of those occurring in the 1994/95 season. David James was in excellent form at White Hart Lane, superbly denying Nick Barmby a winning goal before adjusting himself to smartly save FWA Player of the Year Jurgen Klinsmann’s penalty late in the game. If you fancy a goalkeeper challenge, try naming the Liverpool ‘keeper who kept out a Harry Kane penalty in the Premier League.

Centre-back: Neil Ruddock
James’ penalty save spared the blushes of Neil Ruddock, whose foul on Klinsmann led to the spot-kick. However, he wasn’t so lucky in the reverse fixture that season when he turned a Sol Campbell cross into his own net late on to equalise for Spurs, despite an excellent performance for the Reds up to that point. He was a genuine hero for the north London side in the October of 1992 though, scoring against his future employers to ensure Tottenham triumphed in the first ever Premier League clash between the two clubs.

On this day in 1992, goals from Nayim and Neil Ruddock were enough to beat Liverpool 2-0 at home.

The programme carried Gary Mabbutt’s thoughts whilst current Sky Sports News presenter (then of Capital Gold) was interviewed in the Press Gang. pic.twitter.com/LS21XknMmE

Centre-back: Sebastian Bassong
Rafael Benitez’s Liverpool side were tipped to challenge for the title in the 2010 after narrowly losing out to Manchester United in the 2008/09 season. Unfortunately for the Reds the new campaign started badly for them, with a 2-1 defeat to Harry Redknapp’s Tottenham side on the opening day setting the tone for a disappointing year. Sebastien Bassong scored the winner on his debut for Spurs, heading in a Luka Modric free-kick to give the north London side the perfect start to the new season.

Centre-back: Sami Hyypia
Liverpool’s 2004/05 ended with Steven Gerrard lifting the Champions League trophy but a month before Istanbul became synonymous with miracles, the Reds were struggling to keep up in the race for European places in the Premier League and qualify for the following season’s competition. In the April of ’05, Sami Hyypia scored an equaliser against Spurs in a 2-2 draw to give the Merseysiders a vital point in the hunt for a top four spot. A three-game winless streak meant local rivals Everton finished above them but that famous trip to Turkey ten days later more than made up for it.

Right wing: Steve McManaman
During the late nineties Steve McManaman was a constant thorn in Tottenham’s side when the two teams met in the league. The Merseyside-born midfielder bagged five goals against Spurs, including an 89th-minute equaliser in a thrilling 3-3 draw late at White Hart Lane in the 1997/98 season. McManaman secured all three points for Liverpool in the following campaign, scoring the winner in a 3-2 victory for the Reds in the May of ’99 before leaving for Real Madrid in the summer.

Central midfield: Steven Gerrard
Fourteen years after McManaman’s heroics, another local lad was the hero for Liverpool in a 3-2 win over Spurs. A late Steven Gerrard spot-kick gave the Reds all three points at Anfield in 2013, as the two sides battled for European spots in the Premier League. Gerrard continued to torment the north London side from the spot, scoring penalties in a 3-0 triumph and another 3-2 victory during the 2014/15 season.

Central midfield: Luka Modric
The 2010/11 season remains the only campaign Spurs managed to do the double over Liverpool in the Premier League era, with Luka Modric playing a big part in both victories. The Reds struggled to cope with the Croatian playmaker at White Hart Lane and continued pressure from Harry Redknapp’s side saw Martin Skrtel turn a Modric cross into his own net before Aaron Lennon sealed all three points late on. He went on to score a penalty in the reverse fixture at Anfield in the penultimate game of the season to help Spurs overtake Liverpool in the table.

Will today be the day?

Left wing: John Barnes
Liverpool were in the mood for revenge following their 2-0 defeat to Spurs in the inaugural Premier League season and dished out a 6-2 trouncing to the north London side on the last day of the campaign. Club legend John Barnes bagged two goals in the game to leave fans at Anfield hoping for a title charge the following year. Barnes was at it again for Liverpool in 1995, scoring a superb long-range strike before notching his 100th goal for the club in a 3-1 at White Hart Lane.

Striker: Teddy Sheringham
Liverpool’s hopes for a successful 1993/94 campaign after their 6-2 win over Spurs seemed like a real possibility after three wins out of three at the start of the season. However, Spurs striker Teddy Sheringham gave the Anfield crowd a sign of things to come after scoring two first-half goals to inflict a maiden defeat on Graeme Souness’ side. Both teams ended up enduring their worst Premier League campaigns to date, with Roy Evans replacing Souness in the dugout in the new year. Sheringham was still doing the business ten years later, with the golden oldie scoring a consolation for Tottenham in a 3-2 defeat to the late Gerard Houllier’s Liverpool side in 2003.

Striker: Robbie Keane
Robbie Keane may have played for both sides but his exploits for Tottenham far outweigh his efforts for Liverpool during his short stint on Merseyside. The Irish legend gave Spurs fans a reason to cheer during an otherwise terrible 2003/04 season, scoring in a 2-1 win over the Reds in January. Keane was also on the score-sheet against his childhood club the following year in a 2-2 draw and was at it again in 2007, hitting the back of the net twice in another score-draw between the sides. His departure for Anfield in the summer of ’08 caused plenty of controversy but he returned to White Hart Lane just six months later and bagged a consolation for Spurs in a 3-1 defeat to Liverpool on the last day of the 2008/09 season.

Striker: Robbie Fowler
With an impressive six goals for Liverpool against Tottenham in the Premier League, Robbie Fowler completes a trio of Merseyside-born heroes who flourished against the north London side (Jamie Carragher has three goals to his name but they were all in his own net). One big question in the upcoming fixture is whether the Harry Kane/Heung-Min Son axis of excellence can cause Liverpool’s defence problems, with the England captain looking to join Fowler on six goals in this fixture.