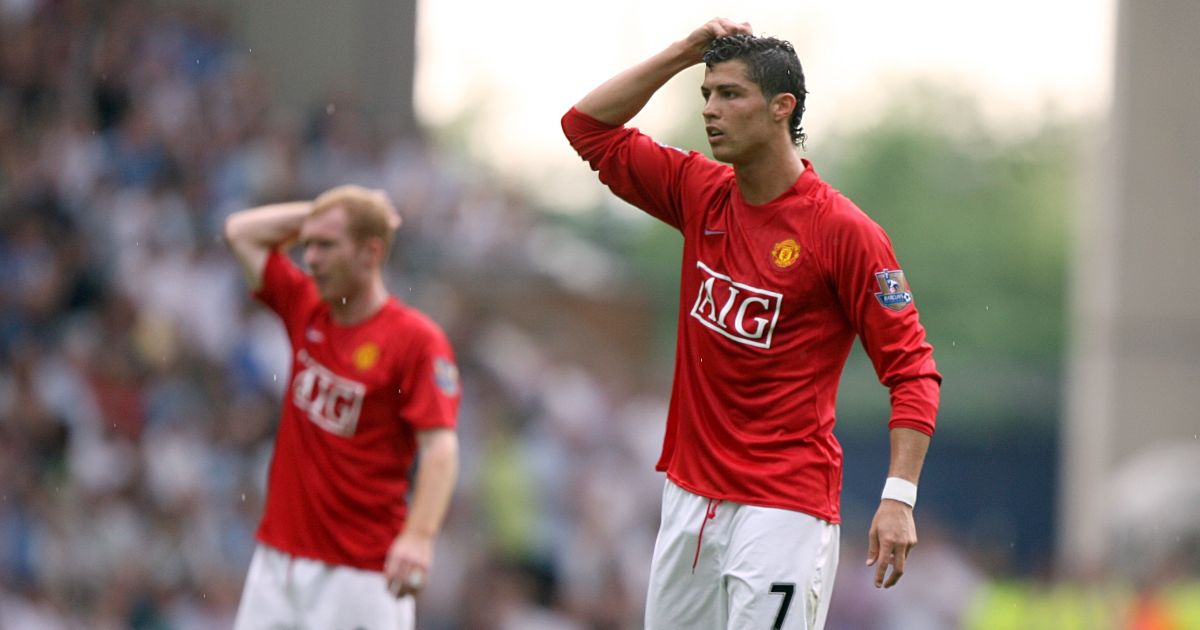 Cristiano Ronaldo’s drought-ending strike against Brighton means the Portuguese superstar joins an elite band of players to have scored in the Premier League after their 37th birthday. Here’s an XI made up of those very men.

Goalkeeper: Peter Schmeichel
Despite spending the halcyon days of his Premier League career with Manchester United, Peter Schmeichel still managed an extraordinary feat during his one season at Aston Villa in the 2001/02. The Great Dane was a month away from his 38th birthday when he became the first goalkeeper to score in the Premier League after volleying in a late consolation for John Gregory’s side against Everton. If you fancy a goalkeeper challenge, try naming the Toffees ‘keeper Schmeichel beat that day.

Right-back: Graham Alexander
Burnley’s first ever Premier League campaign ended in relegation back in 2010 but the Clarets certainly went down fighting. Penalty specialist Graham Alexander’s composure from the spot helped them secure a few points along the way, with the veteran Scot bagging seven goals over the course of the season. Two of those came against Hull in April, when Alexander was 38 years and six months old.

Centre-back: Kevin Moran
Former Manchester United defender Kevin Moran missed out on the Red Devils’ success in the early days of the Premier League, with the Irish international plying his trade at Blackburn Rovers in the first two years of the competition. He helped Kenny Dalglish’s men push United all the way in the 1993/94 campaign and scored the only goal of the game in a 1-0 win over Oldham Athletic three months after his 37th birthday. Unfortunately for Moran, he then missed out on Blackburn’s title-winning exploits the following season after choosing to retire in the summer of ’94.

Centre-back: Thiago Silva
Ronaldo isn’t the first 37-year-old to find the back of the net this season. Chelsea defender Thiago Silva got on the scoresheet in the Blues’ 2-0 win over Spurs last month before Thomas Tuchel’s men set off to conquer the world. Richard Gough and Gareth McAuley are the other ageless centre-backs who qualify for this side, with Gough scoring for Everton in a 4-1 victory against Southampton in 1999, whilst McAuley bagged the winner for West Brom in a 2-1 triumph over Bournemouth five years ago.

Left-back: Stuart Pearce
A true golden oldie of the Premier League, Stuart Pearce was still turning out for England at the age of 37 and played his last top-flight game at 39 before dropping down a tier with Manchester City. Psycho was still screaming about finding the back of net in the 2000/01 season after scoring for the Hammers in a 3-2 win over Southampton. Nigel Winterburn played alongside Pearce that day and the Arsenal legend narrowly misses out on qualifying for this side, having notched his last Premier League goal a month shy of his 37th birthday.

Central Midfield: Tugay
Tugay was still pulling the strings in midfield for Blackburn Rovers in his late thirties and managed to pop up with the odd trademark long-range strike from time to time. His last Premier League goal came in a 3-2 defeat to Portsmouth in the 2008/09 campaign and although it wasn’t one of the Turkish star’s finest hits, he still motored from deep to hit a 20-yarder past David James in the Pompey goal. Not too shabby for a 38-year-old.

Central midfield: Paul Scholes
Another midfield maestro famous for his superb long-distance goals, Paul Scholes wasn’t quite as prolific in his veteran years as he had been earlier in his career but still managed to bag four in the 2011/12 campaign. After that season ended up being a painful one for the Red Devils, Scholes returned for one more Premier League title tilt the following year and helped Alex Ferguson wrestle the trophy away from Manchester City’s grasp. The former England international was on the scoresheet for a final time against Wigan in September 2012, a couple of months short of his 38th birthday.

Central midfield: Ryan Giggs
Scholes’ fellow ‘Class of 92’ member Ryan Giggs managed to trump his long-time team-mate in the veteran goalscorer stakes, with the Welsh wizard registering his last Premier League goal at the age of 39. Former Manchester United midfielder Ray Wilkins just misses out on being eligible for this side, with his strike for QPR against Liverpool in August 1993 coming just before his 37th birthday. Chelsea legend and current Everton boss Frank Lampard is also a month shy of qualifying.

Striker: Didier Drogba
One Chelsea hero who does make the team is Didier Drogba. The Ivorian striker returned for a second spell at Stamford Bridge in the 2014/15 campaign and made fans feel like it was the mid-noughties all over again as he helped a Jose Mourinho-led side to a Premier League title. His last goal for the club came in a 3-1 win over Leicester City, a month and a half after his 37th birthday.

Striker: Teddy Sheringham
Drogba’s old age exploits can’t match up to Teddy Sheringham though, with the former Manchester United and Spurs attacker still finding the back of the net in the top flight in his forties. Sheringham’s last Premier League goal came for West Ham on Boxing Day 2006, with a well-placed strike from an acute angle against former side Portsmouth.

Striker: Cristiano Ronaldo
With all the rumours swirling around concerning his future at Manchester United, it seems unlikely Ronaldo will usurp Sheringham as the Premier League’s oldest ever goalscorer but the Portuguese star will no doubt still be showing off his trademark celebration in his forties in the MLS or back where it all started in Lisbon. Other forwards who qualify for this side include Mark Hughes, Kevin Phillips, Peter Crouch, Dean Windass and Les Ferdinand.